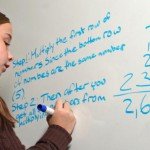 Less is more: math under the Common Core

Before, U.S. math curricula tended to be "an inch deep and a mile wide." Under Common Core, the mantra for math is "depth, not breadth."

It was Valentine’s Day at Argonne Elementary School in San Francisco and Kathy Angus was teaching long division to a squirming class of fourth and fifth graders. Ignoring the undercurrent of barely suppressed excitement in anticipation of the party after lunch, Angus demonstrated several different ways to solve a single problem on the whiteboard. Somehow, Angus kept the kids’ attention, and the room grew animated as students raised their hands to explain the various ways they derived their answers.

A mile wide and an inch deep no more!

Thanks to the Common Core State Standards, adopted by 42 states, Angus’ students will be subject to the less-is-more model of math education. Whether it’s kindergartners learning different methods for basic addition or 12th graders mastering the meaning of calculus as well as its formulas, the same principal holds true: kids will learn fewer concepts but go deeper into the ones they do tackle. This new depth-over-breadth is a key shift under the standards.

Why the shift? Many education experts believe that math curricula in the U.S. covers too many topics in a superficial way. The authors of the Common Core argue that for U.S. students to catch up to their peers in top-performing education countries like Finland and South Korea, this shift is essential. “For more than a decade, research studies of mathematics education in high-performing countries have concluded that mathematics education in the United States must become substantially more focused and coherent in order to improve mathematics achievement in this country,” argues the introduction to the Common Core math standards. “To deliver on this promise, the mathematics standards are designed to address the problem of a curriculum that is ‘a mile wide and an inch deep.’”

This means that kindergartners no longer get “data analysis,” but they do master basic addition and subtraction both conceptually and practically. It also means that third graders won’t be doing “algebraic thinking” but will spend more time nailing multiplication.

According to the Trends in International Mathematics and Science Study (TIMSS), which assesses math skills in 63 countries, American third graders were taught 22 topics, compared to their international counterparts, who learned only seven. Common Core does not curtail the number of math standards quite to the extent that high-performing countries do, but Common Core does scale back the number of topics covered in first grade to eight and third grade to 13.

While these numbers may seem arcane to anyone but textbook authors, the relevance hits home when you consider that most American algebra books have more than 800 pages. A colleague of mine with an eighth grader asked her child’s algebra teacher how his students could possibly get through the whole book: “Oh,” he told her, “we won’t. We’re lucky if we get through half of it. Then I just hope it’s the half that the high schools test their incoming students on.” (One reason that U.S. textbooks include so many topics: textbook companies sell to multiple states, so they must include all the states’ different standards in their textbooks. A goal of the Common Core is to create a uniform set of curriculum standards for all participating states.)

What deep (rather than wide) looks like in action

In the new Common Core classroom, increased focus means that students learn to solve problems using several different methods and tools, as well as standard algorithms (the old-fashioned way many of us learned in school). The whole push is to make sure kids truly “get” math on a deeper level — not only by solving problems but by comprehending them conceptually and understanding how they might apply in real-life situations.

The depth-over-breadth method also means that students are expected to show their work in more explicit ways than in the past. Sometimes they are asked to explain their thinking in words. Sometimes they’re expected to outline, step by step, how they got to their answer. (Common Core worksheets often feature a box beside each problem, a space where students can demonstrate exactly how they reached their answer.)

Kathy Angus likes the Common Core approach. Pulling out her previous math textbook, she points out how each chapter covers multiple topics. The idea behind this design sounds good — except it doesn’t work for many students. “The same concepts spiral through the curriculum, and the idea is that, when they’re ready, kids will understand how it works. For some kids, before they could grasp a concept we’d be on to the next one, and it was a struggle for them to keep up.”

This year, Angus’ classroom will be covering more than just division, of course — under the Common Core, fourth and fifth grade math also covers decimals, fractions, and basic geometry.

Angus says the new approach is, “a much more logical way to teach. It’s authentic; the material is carefully scaffolded so the kids are ready when it’s time to move ahead.” Math under Common Core, says Angus, gives kids “a deeper sense of numbers — a 3-D sense of numbers and what they can do — versus having a superficial understanding of many different math concepts.”

The overriding goal of this new approach is to give kids a solid math foundation. According to Angus, it also helps students find the strategies that work best for them. Some kids do better using manipulatives, for example. For others, writing out a problem helps kids understand the process.

Throughout the math lesson that morning, one boy sat at the edge of the classroom staring into space. Angus tried several times to get his attention, but he quickly lapsed back into a reverie. He had a worksheet of problems in front of him, and every once in a while he’d lean down and, without visible effort, scrawl out the answer.

“You have to show your work,” Angus reminded him as she circulated through the classroom, checking worksheets and answering questions. “It’s not complete unless you show your work for every problem.” She gestured to the empty boxes on his sheet.

The boy scowled. “I liked math better before,” he confided to a classroom visitor. “I do the problems in my head. I don’t see the point of putting numbers in little boxes.”

Later, Angus told me that math comes easily for this boy, and he’s resisted the changes under Common Core every step of the way. “He doesn’t understand that if he masters these techniques now, it will help in later grades when math gets harder.”

He’s not the only student who doesn’t like the new approach. Indeed, for gifted learners for whom the material comes naturally, it may seem senseless to have to explain the obvious. Angus admitted that for several of her students, the transition to Common Core math has been a struggle. “Some kids don’t like having to slow down and go step by step through every problem,” she said. “Others have trouble getting their heads around the multiple ideas and strategies.”

Still, Angus is optimistic that once students acclimate themselves to the rules and rigors of Common Core, the new approach will better serve all of her students: “For these kids, it’s been a huge change. But for students who start learning the new methods in kindergarten, it will be what they’re raised on — what they know right from the start.”