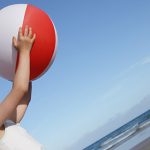 For a lot of kids, second through fifth grade is a time of wildly imaginative play and ceaseless exuberance. It’s also a time academically when kids are forced to get certain kinds of basic knowledge deeply and permanently committed to memory.

Math facts — simple addition and subtraction, multiplication, and division — are probably the most grueling and tedious of these chores. (Just try to brightly suggest that flash cards can be fun and see what sort of response you get from a child struggling with learning his 7s time tables.)

But this game offers a new twist on an old task. Whether you’re tossing a beach ball by the ocean or just imagining sandy dunes on the living-room floor, this simple game can turn math drills into silly, athletic fun.

Increase the difficulty by using larger numbers to add and subtract or by multiplying the numbers.