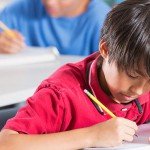 For some kids, when the pressure's on, the ability to focus turns off. Here's how mindfulness lessons can help kids bypass distractions to do their best.

If there’s any time when we should be paying close attention to what we’re doing, it’s when we’re under pressure to perform, whether on a test like the SAT or on a deadline at work. But too often, our minds wander even in these crucial moments, distracted by a ticking clock or consumed with worries about how well we’re doing or how much time we have left.

Jonathan Schooler, a professor of psychology at the University of California, Santa Barbara, wondered if instruction in mindfulness — the capacity to focus on the here and now — could help. In a recent issue of the journal Psychological Science, he and his co-authors describe an experiment in which 48 undergraduates were randomly assigned to either a mindfulness class or a nutrition class. Both classes met for 45 minutes, four times a week, for two weeks. During the mindfulness class, participants sat on cushions in a circle; they were asked to pay focused attention to some aspect of sensory experience, like the sounds of their own breathing.

They practiced distinguishing between the simple thoughts that naturally arise in our minds (I have a test tomorrow) and the thoughts that become “elaborated” with emotion (I’m really worried that I won’t do well, and if I fail it, I’ll have to take the class over, and then I won’t graduate on time). The undergrads enrolled in the mindfulness class were taught how to reframe these more emotional concerns as mere “mental projections,” and how to allow their minds to rest naturally, rather than trying to suppress or get rid of their thoughts.

All of the participants, who had completed a measure of working memory and a verbal-reasoning section from the GRE (a graduate school admissions exam) before the classes started, took these tests again after the classes were over. Researchers also checked how frequently the students’ minds wandered while working on the tests. Schooler and his colleagues found that participants who had received the mindfulness training improved their GRE reading-comprehension scores and working-memory capacity, and experienced fewer distracting thoughts while completing the measures the second time.

Schooler notes that findings of his study are in line with other research showing that mindfulness training leads to reduced activation of the “default network,” a collection of regions in the brain that tend to become more active when our minds are at rest than when we’re focused on a mentally challenging task. People who have been practicing meditation for many years — and even those who have undergone mindfulness training for just a couple of weeks — show reduced activation on brain scans of this network, which has been associated with mind wandering. It may be the case, Schooler theorizes, that mindfulness training reduces mind wandering by “dampening” the activation of the default network, preventing our thoughts from straying.

IQ can be increased

And this research carries an even more exciting implication, Schooler observes: “Counter to the long-standing assumption that mental aptitude is largely fixed across the life span,” he writes, a number of recent studies have indicated that IQ can be increased through targeted interventions like this one. “The present demonstration that mindfulness training improves cognitive function and minimizes mind wandering suggests that enhanced attentional focus may be key to unlocking skills that were, until recently, viewed as immutable.” Something to think about — or, actually, not think about — the next time you’re under pressure.