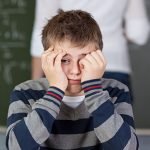 Not thriving, but not quite failing. Is there help for my boy in this educational no-man’s-land?

When the counselor said, “I don’t see the problem,” I knew we had a problem.

On the table were my middle school son’s grades. Nine weeks into the school year, his grades were comprised of Bs and Cs, but experience told me we were one week shy of total collapse.

He’s about to fail, I told his teachers. The only reason Ds and Fs weren’t littering his academic record was because I’d been there to catch him — every day, every year.

Since second grade, he’d followed the same pattern, charging into the new year with renewed vigor and an oath to do his best. And he would, almost to the end of the first quarter, but not quite.

Failed tests and red marks would pepper his grade book like first drops of rain — drip, drip — until blue skies disappeared and the dark cloud burst. For the rest of the year, I would nag, cajole, bribe, and fret as he (we) struggled to catch a ship that doesn’t wait.

The poor boy had huge shoes to fill as his siblings set high academic bars. Don’t compare him, teachers told me, though I knew I didn’t. He lived larger, charmed masses, talked more, and always chose SpongeBob over Bill Nye the Science Guy. I never expected him to top his class.

But I did expect that he would get it. And he wasn’t getting it, at least not completely. He was always a few steps behind. Not enough to consistently fail, but enough for him to recognize he never earned class rewards or early recess. Not behind enough to be noticed, but behind enough to notice he was always behind. I began to think of him as my “gap child.”

Feeling helpless about getting enough help

Early testing showed that he was at grade-level. He doesn’t need help, we were told, though the school psychologist suggested auditory strategies to help him with homework. We identified a low-level processing disability, but found it wasn’t recognized by the Individuals with Disabilities Education Act (IDEA).

Middle school exacerbated his challenges with multiple classrooms, large blocks of information, and stricter rules. Natural educational progression dictated that my role change: I was expected to take a backseat and only get involved after disaster struck.

Normally, this makes sense. But I knew my son. And I saw him driving toward a precipice over which some classmates effortlessly leaped, while others were directed toward an aided walking bridge with guide rails.

Though confident about my son’s ability to thrive at life, I worried about his ability to reach government-sanctioned benchmarks. He posted Below Basic math scores, but engineered intricately trussed Lego structures. He couldn’t decipher narrative nuances, but drew pictures with Where’s Waldo-esque detail. Those skills had to count for something, right?

At home and in the real world, yes. In school, not so much. A vast tundra between educational accountabilities and a high school degree lay before us. We were caught in the no-man’s-land between thrive and left behind and it seemed all we got were “hey, but he’s passing” responses.

Is there help for kids falling through the cracks?

For years I had talked to the teachers, the principals, but gradually I saw that there was a deep divide between us. Every year I laid out his academic history, explained his challenges, and appealed for non-sanctioned and unofficial allowances to help him succeed — a frustrating process that revealed both the shortfalls and limitations of our school system.

Gradually I realized I needed perspective and not the kind that comes from a pep talk article telling me to “just talk to my child’s teacher.” So I contacted Kelly Price, a special ed advocate and trainer at Our Special Ed Advocate.

Why, I asked her, did this annual process feel like an upstream battle? She told me the feeling that getting help is — or will be — a battle often stems from misconceptions about what schools can offer.

“Parents maybe had their own learning problems and are intimidated to approach the school,” she says. “Or, parents assume the school will automatically do the right thing. Parents have to understand that [school intervention] has to be based on educational ability.” If no data points to a problem, there isn’t a problem to address.

That doesn’t mean that schools won’t help establish a plan for success, says Cindi Kehoe, Ed.D, Director of Intervention Services and Alternative Programs for the California-based Redding School District. They should, but it can feel like a forgone failure, too little too late, if the process gets started too late — well into the school year. “We often wait too long to communicate,” admits Kehoe. “People get frustrated. The student fails. And it feels like no one is listening.”

It’s also not impossible that educators will resist efforts to help. Price tells of one administrator who refused services for a student until Price threatened a civil suit. That case, she says, was a “power trip but not the norm.”

Both Kehoe and Price agree that getting help for marginal but not critically lagging students starts with building a relationship between the parent and the educators. A process that can be time-consuming for overworked parents. “When I advocate for a family, my goal is to walk out of meetings with as good as or better relationship than we started,” says Price.

Kehoe adds that parents absolutely have the right to ask for a “student study team” to address concerns and “yes, it may take some effort,” but building a relationship to where you feel you are heard is important. Just remember “emotionality is there for teachers, too.” They may be frustrated, so staying even-keeled and non-adversarial is key.

Parents who have successfully raised a gap child repeatedly invoke a persistent theme in their stories: persistence. Trenton Wilson, a career counselor and father of three from Utah, says his daughter’s disabilities also were not apparent enough to warrant an IEP. He found that a relentless, but open and willing, approach put his daughter on educators’ radars. “My wife educated them about [our daughter’s disability], asked how she could help, volunteered in the classroom and always looked ahead to the next year,” he says. “She was our very own IEP.”

“Teachers are educational experts,” says Price, “but parents are their child’s expert. We need to be asking what we can do to work together.”

Being relentless when it comes to your child

It turns out I’ve been both right and wrong in managing my son’s educational success. I’ve been right in initiating meetings, but I’ve been wrong in thinking his school wouldn’t help simply because I’d landed in front of an unhelpful counselor.

As Cheryl Roshak, who helped her dyslexic ADHD son through school pre-NCLB observed, “If one leaves no stone unturned and keeps searching, there is help, but it takes due diligence on the parents’ part.”

Though I wish it were different, I’ve learned there is no panacea for the child stuck in no man’s land. It will continue to be my job to advocate for my son, tactfully reminding our “team” of his objectives. Knowing I have the right to ask and understanding how to ask helps me know I’m doing the right thing.

With our “it takes a village” approach, my hope is he’ll graduate with dignity and belief enough in himself to pursue his passions. An easy task? Certainly not. But worthy? There’s no doubt.