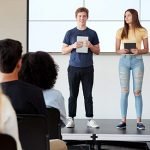 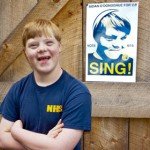 My son the vice president

When her teenage son announces he wants to run for student council, this mom doesn't blink. Even so, she is well aware of how far kids with Down syndrome have come.

When our son came home from school last spring and casually mentioned he wanted to run for student council, my husband and I kind of nodded and said, “That’s nice.” We figured it was a passing thought, and we didn’t give it much credence.

Aidan was finishing up his freshman year at our local high school. He has taken full advantage of the school’s many offerings — he joined the wrestling team and the theater club. He ran relay and threw discus on the track team, he read a poem in the poetry slam, and he performed in every talent show that came his way.

“I want to run for student council.”

So I guess we shouldn’t have been surprised a few days later when he brought it up again: “I want to run for student council.” He loves his school and he wants to give back a bit. Politics is practically in his DNA – he has worked alongside us on every local election since he was a toddler – going door to door and holding signs on election day. So it was natural that his idea of getting involved at school included running for public office.

Actually, there’s nothing particularly surprising about him aiming this high except that Aidan has Down syndrome. Forty years ago, he wouldn’t have even been at the high school. Thirty years ago, maybe he would have been in a classroom in the basement (if he was lucky). Twelve years ago, when he was in preschool, I talked to a parent whose child, who had a disability, was spending much of the high school day washing tables in the cafeteria and sweeping the halls. 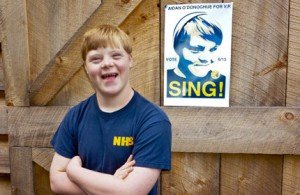 A slow but sure change for people with Down syndrome

That slow but sure change has come about because of a federal law — Individuals with Disabilities Education Act — that recognizes that people of all abilities have the right to be educated in their community. The law also recognizes that students do better when they are not separated from their peers and calls for students to be taught in “the least restrictive environment.”

That idea has evolved over the years, but these days is understood as “inclusion.” For Aidan, being anyplace but in the heart of the action is just not an option. Academically, he needs lots of support. But that doesn’t mean that his needs, hopes, and desires are any different from a typical 16 year old.

Taking his aspirations to a new level

So now he takes it (and us) to a new level. He wants to run for class vice-president. His teacher at the high school is his biggest supporter and cheerleader. As soon as he told her what he wanted, she made sure he got the forms he needed. He went out and immediately gathered the required signatures and started working on his speech.

He told his father what he wanted to say — why he was running, why he thought he’d be good, and what he’d do if elected (have more dances and singing, of course). We typed up the speech, put it in 24-point font to make it easy to read, and he started to practice. He rehearsed that speech over and over — at school, with his speech therapist, at home after supper, over Skype for his brother at college. A friend made him an Obama-esque poster that featured his picture with the word “Sing!” and he hung them up around the school.

A victory for Aidan

Later that week he delivered his speech. One other classmate was running for the position and she asked if he wanted to team up and run together, and he agreed. Since there were no other candidates, it was a pretty sure bet that they were in, but he didn’t celebrate until it was made official the next day. Now that he’s an official sophomore (and a sophomore official) he goes to weekly Student Council meetings where they are busily planning their float for the school pride celebration. He won’t tell us what they’re doing because it’s a secret, but he is taking this first assignment very seriously.

While to Aidan this is just another thing he is doing in high school, to me it is practically unfathomable.

When Aidan was born, I was terrified of the idea of him attending middle school and high school. I had lots of scary visions of what would happen — none of it was pretty. But a combination of things has meant a completely different reality than my dark version.

Undaunted by his challenges

First, there’s Aidan. He has an exuberance and lust for life that cannot be kept down. He is undaunted by the challenges he faces. Then there’s this evolved education law that provides a foundation of respect and support. Third, there are his classmates and his team of teachers and aides. This group has supported all of his ambitions, has cheered him in victory, and helped him through hard times. Fourth, I give credit to Whole Children, a local after-school center where he has found community, built his self-esteem, and learned that his voice matters.

And lastly, well, here I have to set aside modesty. Though the school system provides that foundation, it takes involved parents to make sure that students get the supports and level of education they’re entitled to. Sometimes it feels like a full-time job, and it often feels like it shouldn’t be this hard.