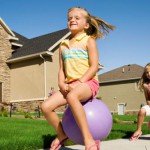 Health and the ‘hood

Is the newfangled American dream (yes media room, no main street) hurting the very families it is designed to protect?

Every year nearly 12 million U.S. households pull up stakes and head for a new campsite. Although these moves may be primarily motivated by other reasons — foreclosure, job loss or transfer, desire for a better home — families with children usually think long and hard about how their move will affect their children. How will the kids deal with the change? Will they make new friends? And most of all, what school will they go to?

One question you probably won’t hear bandied over the kitchen table: “Honey, how will the neighborhood design affect the kids’ physical and mental health?”

Yet after chatting with Richard Jackson, chair of UCLA’s Environmental Health Sciences at the School of Public Health, one wonders why ever not. A pediatrician and former director of environmental health at the Centers for Disease Control and Prevention (CDC), Jackson has spent the better part of the past decade rethinking U.S. children’s most pressing health problems from a radically new perspective: through the lens of the neighborhoods they grow up in.

At the CDC, Jackson noticed that his agency wasn’t addressing the primary health risks most kids now face. “Most of the environmental health hazards that we focused on — toxic chemicals and climate change — were relatively remote and abstract,” he says. “On the other hand, a lot of our environmental threats come from polluted air, water, stress, which can be traced back to transportation. And our transportation [system] is a response to how we build our environment.”

Thus, one of the country’s foremost public health pediatricians began thinking like an urban planner.

“In 1969 over 40% of children walked to school,” Jackson explains. “Now the numbers are less than 13%.” Subsequent studies have found that walking to school promotes higher levels of physical activity in boys and that the farther girls live from school, the less physical activity they get. Surveys also show that when asked why they drive their children to school, parents cite a range of reasons including traffic, crime, and weather — but the foremost concern is distance from school.

“There’s been an absolute decline in fitness and an absolute increase in obesity,” says Jackson. “We’re all burning fossil fuel instead of burning excess fat.” In other words, when he traces the root causes of the ills of modern childhood, Jackson’s studies lead him to a suburban cul-de-sac, a car ride away from any school, park, or store.

Too pat? Jackson’s the first one to admit that 32% of U.S. children are obese as a result of many factors. But a growing body of research suggests that neighborhood design does play a role in children’s physical well-being.

From asthma to apathy

Should the far-flung burbs get all the blame for our kids’ morbidity and malaise? Hardly. Still, as any parent knows, when the school year hits the fan, convenience and safety trump all else. Whatever we believe about kids needing plenty of exercise, fresh air, and community may fade in the face of choosing between a walk that involves a highway crossing and another car commute.

Though the new wave of “healthy neighborhood” research is mostly directed at pediatricians, planners, and other policymakers, Jackson’s ideas cast light on what kids really need from their neighborhoods and how parents on the verge of relocating can consider those needs.

“It’s important for parents to realize they only have a preschooler for a very short time,” Jackson says. “It may be fine to drive them around when they are 4 or 5, but when the kids get to be teenagers, it’s a different story. So parents need to think about the best environment for their children across different ages.”

Before families move to a new community, Jackson recommends checking out places on How Walk Score Works. Will they be able to assess the public transit system? Can children walk to school, a library, or a park? “Look into whether you’re going to have to pick up your 14-year-old son from soccer practice every night because the last bus leaves too early,” he says.

The civilizing power of green space

Research suggests that access to natural areas promotes children’s play and socialization, so looking for backyards and nearby parks isn’t frivolous. In one famous study of Chicago’s Robert Taylor Homes, the largest public housing development in the world, researcher Bill Sullivan looked at children playing at the “hardened” versus the “green end” of the projects and found that those with access to trees and grass socialized better than those playing on asphalt. (Even adults seemed to fare better: A far smaller percentage of parents who spent time in green space reported hitting their kids than those who did not.)

Your commute, their mental health

“The best place for kids is where they’ve got loving adults,” says Jackson. How might this be relevant to the neighborhood you choose? Consider the long-term costs of commuting on your children. “If Mom or Dad’s exhausted from a long commute and dinner is from the fast-food restaurant because no one has time to cook, then it takes away from time with the kids,” he explains. “A lot of family life is a rat race.”

Jackson knows this from experience. While working at the CDC in Atlanta (a city known for its sprawl), Jackson and his wife had three boys at three schools and two careers. “Every afternoon we had to decide which of our careers was less important when trying to figure out who would pick up the kids,” he says. His advice? Rethink the long commute. “In our zeal to give our kids so much, we’ve made [life] pretty lonely for a lot of them.”

In the end, it may make better financial sense to live without a car or commuter expenses, to the tune of $10,000 a year, but pay $150,000 on your mortgage. “It may be a foolish economy to buy cheaper farther away from work,” says Jackson.