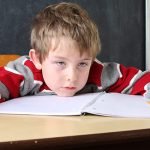 Parent stories: “After years of failure … a miracle”

One mom's struggle to identify her son's learning disability and get him the services he needs.

“Elaine” is the mom of three children with special needs. She lives in California with her family. We’ve changed her name and that of her son because of a confidential legal settlement she reached with the school district.

Elaine’s oldest child, “Luke,” is now 16 and has speech and learning disabilities. Her second son is 14 and has been diagnosed as high-functioning autistic. Her daughter, 7, was a late talker and received special education services in pre-kindergarten. Elaine spends a lot of her time dealing with her children’s disabilities and trying to be sure they are getting the help they need. “My children’s disabilities are my volunteer work!” she said.

This is the story of Elaine’s journey to get Luke the services he needs. It was a journey that took careful research, persistence and forceful advocacy. But her son is succeeding today. “After years of failure at school, it was nothing short of a miracle,” she says.

Rochelle Blumenfeld is the mom of two children and works as an optometrist in San Francisco. Her son, Jonah, was in first grade at a private elementary school when his family first suspected he might have a learning disability. This is the story of her family’s experience….Read the full article.

A teacher’s mentoring makes the difference. Read the full article.

Learn more about how to help your child with special needs.

Elaine suspected early on that Luke might have a learning difficulty. Her youngest brother was dyslexic, so she had some experience with learning disabilities. When Luke was a pre-schooler, Elaine noticed that his language and fine motor skills were delayed. She said, “He was very sweet, but his writing and drawing were delayed, he didn’t like to color and he didn’t want to read books with me.” Elaine knew that language delays are often the first indicator of learning disabilities and decided to have Luke evaluated.

Elaine arranged for a private evaluation for Luke, and he was diagnosed as having inattentive attention deficit hyperactivity disorder (ADHD) and a speech disorder called oral and motor apraxia. Children with oral (or speech) apraxia have trouble planning and producing the precise movements of the mouth necessary for intelligible speech. Motor apraxia affects coordination and balance in gross and fine motor movements. For example, a child with motor apraxia might have difficulty with writing or tying shoelaces. Apraxia can affect success in school and social development.

Working with the school district

Elaine took the evaluation to the local school district and received approval for Luke, who was then 3 and ½ years old, to get speech and occupational therapy from the district once or twice a week, both in group settings.

The therapy Luke received from the district was not enough to be effective, according to Elaine, and he did not make significant progress. She later learned that the recommended treatment for apraxia is 30 minutes of therapy 3 times per week in a 1-1 setting, not once or twice a week in a group setting. “I just didn’t know enough,” said Elaine. “I thought I was doing the right things.”

When Luke started kindergarten at a local public school, he continued to receive the same services. Elaine asked Luke’s teacher if he might have a learning disability, but the teacher said he was too young to be tested. The following year, his first-grade teacher told Elaine that Luke’s difficulties were developmental and that he was just a beginning reader. Elaine notes that if the problem were just developmental, she thinks Luke should have made some progress during the year.

By the end of Luke’s year in first grade, the speech therapist could tell something more was wrong and requested an evaluation, which was provided by the school district. At the beginning of second grade, Luke was diagnosed with a “specific learning disability,” which was a category of disability under the special education law that would allow him to receive services. He began to receive help from the resource teacher 45 minutes a day, 5 days per week. Elaine said the resource class was a group setting, with up to 9 students.

At first, Elaine was happy that Luke was getting help, but at the end of third grade, after two years of resource help, his reading test scores were in the bottom 1%. Elaine knew she had to look beyond the school district for help. Around this time, Elaine read an article in a news magazine that mentioned the Lindamood Bell technique. The Lindamood Bell technique stimulates basic sensory functions related to learning and develops language processing skills. It is frequently used with students with learning disabilities like dyslexia, ADHD and autism. She found a private reading clinic that used similar methods and took Luke there for an evaluation.

When tested by the clinic, Luke appeared to be borderline retarded. On a test of learning aptitude, his mental age showed as 0. Elaine remembers, “The evaluator said that if Luke hadn’t gotten the most difficult comprehension question correct, she’d have been really worried.”

Elaine decided to take Luke to the clinic for private tutoring in fourth grade. She planned to ask the district to reimburse her for the cost, and she cautions parents that if they get outside treatment for their children and want to ask the district to reimburse them, they must notify the district in writing that they are getting the treatment and that they intend to seek reimbursement. Luke received 120 hours of treatment from the clinic — an hour per day, 5 days a week. One thing he worked on there was his ability to hear sounds in the right order, or “phonemic sequencing.” Luke had little “phonemic awareness,” which means he has trouble hearing, identifying and using individual sounds, or phonemes, in spoken words. As an example, Luke could only hear one sound in the word cat, which has 3 sounds, and he could not rhyme.

This treatment was very effective for Luke. After about 40 hours, he was with his mother in a mall and he read a sign in a Good Guys store window that said, “car stereo installation.” She remembers that day, because it was the first time he’d been able to read anything like that. At the end of fourth grade, when he had completed the 120 hours of treatment, he tested with a mental age of 13 years. Elaine says that made it worth the emotional and financial gamble they’d taken on the clinic’s program.

Despite his new reading skills, fifth grade was a very hard year for Luke. Although his reading was accurate, he had not had time to develop reading fluency and build comprehension skills. He read very slowly and he could not understand a lot of what he read. His ability to understand, called a receptive skill, and to speak, an expressive skill, were not as developed as they needed to be to keep up in fifth grade.

“He really tanked in fifth grade and the kids started making fun of him,” remembers Elaine. Luke had a hard time making friends and often couldn’t sleep at night due to stress. One of the worst moments for Elaine was a day when she was talking with Luke about the future. “When he was younger, he said, ‘I want to be a fireman,’ but in fifth grade, he said ‘Well, I could probably clean up messes in a supermarket.’ He was not that articulate, but that said it all.”

Elaine decided to get a private neuropsychological evaluation of her son. The evaluation showed a huge language gap: his performance IQ was 110 (above average), his verbal IQ was in the mid-80s (below average), and an evaluation by a speech therapist placed his speech in the first or second percentile. The evaluation indicated that Luke could not succeed in public school, so Elaine started to look for other options, particularly “nonpublic schools.” Nonpublic schools are privately run schools that can receive public and private funding. They provide educational services for students with special needs that cannot be met by public schools and most can serve students placed there by school districts and students paying privately. Elaine also hired legal counsel to advise her on special education rights.

Elaine and Luke considered a special day class in the school district, but they found the level of achievement of the students to be so low, they did not think Luke could make progress in the class. Elaine settled on a nearby school for children of average or above average intelligence who have language-based learning disabilities. The classes at the school have ratio of 6-1 (12 students with a teacher and an aide).

Luke attended middle school at the nonpublic school and the family’s life changed. Elaine said that the individual attention, remediation and acceleration Luke got in class brought up his confidence and his written expression. “It really got a lot of stuff going on and he finally had a group of friends. The right school gives the gift of whole family mental health. If your kid’s happy, you’re happy!” says Elaine.

Elaine worked with her lawyer to get the school district to pay for Luke’s placement. They were able to negotiate a compromise on the costs of Luke’s placement and tutoring.

Luke is now in 10th grade at the same school and is doing better than ever. The school has a college prep focus, and Luke knows he will go to college. Math and science have become strengths for Luke, and he was the top student in his sign language class.

Elaine has learned a lot from her experiences, and she recommends: “Get everything in writing from the school district, and make all your requests in writing. If it is not in writing, it didn’t happen.” Elaine also recommends that parents request to tape record IEP meetings. “It may seem adversarial, but having an accurate record of the meeting is really best for both sides. Also, keep all of your child’s work — it is a record of progress, or not!”

She advises parents to do their research carefully — when things start to head toward litigation, parents need to know what their children need and why. She remembers researching her son’s disability and looking for appropriate treatments. “Without the Internet, this would be a totally different story!” she says. Parents should also be sure to have a good evaluation of their child that recommends a particular program or treatment. Elaine notes that parents are entitled to have the school district pay for an independent evaluation if one is necessary, but they will probably need to notify the district that they are going to get one, pay for it themselves and seek reimbursement later. She says it is very difficult for parents who do not have the resources to seek private evaluations and services with the risk that they might not be reimbursed.