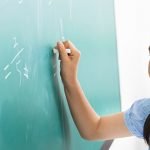 Math whiz Kalid Azad says the best response to this lament is to help kids discover math in the world around them.

“If a kid says they ‘hate math’ — don’t dismiss the argument,” says the author of Math, Better Explained. They probably hate the problem in front of them, but I would be surprised if they hated every application of math. It’s pretty much impossible in the modern world to not use math. Counting, money, decimals, estimation, mileage — all these things are there, but we don’t count them as math because we’re so used to them.” According to Kalid, there are plenty of ways to find the joy of math in daily life.

“If a kid said, ‘I hate math’ I would play games with them so they’d see math as a way to look at the world. Instead of abstract problems, I’d relate math to real-world things they were interested in — sports, arts and crafts, candy, or poker. I’d say, ‘Okay, that’s fine, let’s skip the math, but let’s walk across this field or let’s go shopping’ and then I’d try to make math something that relates to their life.

“It’s futile to use abstract arguments like, ‘It will teach you how to think better,’ or, ‘In 10 years when you’re in college it will be useful.’ We’re not very motivated to strive for awards that are decades off. We’re fooling ourselves if we think that will work for a kid who has even less impulse control than we do. It’s so distant it’s not going to be motivating.

“You can say, ‘What you’re doing now, drilling endlessly… I don’t like it either. So let’s to something different.’ Then do something relevant to their world. If math is ‘difficult,’ it’s probably because we’re thinking about it in an overly complex way. Math is a constant process of solving questions in easier and easier ways. In general, nature is elegant, and if we think that math is a way to describe nature, it seems that math should be fairly elegant as well.”

Deborah Tillman
America’s Supernanny Deborah Tillman says that when a child is struggling with math — or any subject — parents need to step in quickly to help. Here’s how. Format: Video (1:20)

Sheila Tobias
The author of the seminal book on math phobia, Overcoming Math Anxiety, says that every child — save a rare few — can succeed at math. Here’s how. Format: Article