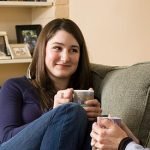 Now that your kid has turned 18 — you need a new parenting mindset. Here's how to get it.

“Do you need any help?” I ask my daughter. She’s a senior in high school taking a challenging course load. She’s also retaking the SAT exam and applying to 10-plus colleges — on top of multiple activities, in and out of school. She’s been busy, but it suddenly occurs to me that she’s barely consulted me at all.

“Do you want me to look at your applications, or proofread your essays? I know you’ve got some deadlines coming up….”

She gives me a pitying look. “Don’t stress, Mom. I have it under control.” She’s right. By early December she will have submitted all of her college applications on time.

The mature and efficient way she’s handling the process astonishes me because this is the same girl who ignores a sink full of dishes and won’t do her laundry without being reminded. Her room is a treacherous landscape of exploding drawers and tangled piles of forsaken clothing.

If your child is a high school senior, she’s either 18 years old now or will be soon. And so like me, you’re parenting an adult — sort of. The contradictions can be abrupt and unsettling: she’s remote and prickly one day, chatty and affectionate the next. He’s impressively competent yet wildly disorganized. They insist on their independence and privacy — until they suddenly demand your help. You’ve entered a new phase of parenting, with a new set of challenges, frustrations, and surprises.

What they’re going through

It helps to understand what your child is experiencing and to see the world through his or her eyes. Your child may be 18, or close to it, which is still essentially a teenager. According to UCSF professor and psychologist Elizabeth Ozer, developmental psychologists think of ages 18 through 24 as the late teenage/emerging adult years. “You’re likely to have less conflict with your teen at this age, versus when they were 14 to 16 years old,” she says. “They aren’t as reactive, but they’re still essentially teenagers, and you should expect them to act like it, at least some of the time.”

It’s also important to consider how stressful senior year in high school can be. Most high school seniors have had the importance of college drilled into them since freshman year, if not earlier, and are highly attuned to the expectations of the adults in their lives. Suddenly college isn’t far out there in the misty future: it’s staring them in the face. They know that their world is about to change dramatically, and they aren’t sure how to prepare for it.

“There are a couple of clashing things going on for kids this age,” says psychologist John Duffy, who works with teens in his clinical practice and produces a podcast that offers advice for parents of teenagers. “Beginning late in junior year and during their senior year, they are very aware of their impending freedom, and they’re really excited about it. At the same time, it’s scary. They’re worried about whether they are capable of balancing school and their social life and all the other new pressures coming up. So they are excited and scared in equal measure.”

The ways kids deal with this impending life transition are as individual as the kids themselves. Some teens become moody and distant, Duffy says, particularly with their parents. “They want the freedom, and they don’t want their parents to restrict them from choosing the college they want, so they don’t want to talk about their doubts and fears. Or they may not even be conscious of their own mixed feelings.” Some teens refuse to engage in the whole process and drive their parents crazy by letting their grades drop, blowing off college visits, and missing deadlines. Others act out, picking fights and ignoring curfews. Your child may exhibit some or all of these behaviors at some point during her senior year — and act perfectly normal much of the time, too.

San Francisco father Joshua Ets-Hokin found the second semester of his kids’ senior year particularly challenging. “I tell friends who haven’t been through it to mark their calendars. On March 15th of senior year in high school, your child is going to become the world’s worst roommate. They borrow the car but don’t put gas in it. They’ll leave wet towels in a pile on their floor. They’ll put the empty milk carton back in the refrigerator.”

Other kids may express a sense of loss. “We noticed this with one of our sons,” says Ozer, who has two sons in college. “It was the second semester of his senior year, and he wasn’t getting energized about where he was accepted and where he wanted to go. We asked him about it and he got pretty upset. He said, ‘I am just so happy right now that it is hard to think about leaving my friends and family and starting all over in a new place.’”

What you’re going through

As a parent, you’re also facing a major life change. It’s important to acknowledge your own feelings and to examine how they could be affecting your relationship with your child. You’re likely feeling a combination of things: pride in your child for all she has accomplished, concern about where she’ll end up and how she’ll manage on her own, grief at the impending end of her childhood, and excitement for her glorious new adventure.

“I went through it myself,” says psychologist Duffy, whose son is 21. “I was surprised, because I’ve been an expert on parenting teenagers for years, and I wasn’t expecting to have such a powerful reaction. I found myself tallying all the lasts. ‘This is the last time he is going to be in the pool with the swim team. The last time I’m going to drive him to practice.’ I think parents tend to catastrophize and mirror our kids’ anxieties, and we may even feel them more than they do, since kids are better at being in the moment than adults are.”

Some parents react to all the impending changes by becoming increasingly controlling. Before my oldest child left for college, for example, I found myself worrying about all the things I’d failed to teach him. Did he know how to wash his clothes or clean the bathroom? Who would help him set up a bank account? Was he a competent enough driver to be let loose on the driving public? I drove him crazy by trying to instruct him on every life lesson I could think of. Looking back, I’m sure all the worry was displaced grief and anxiety about letting my first born head out into the world on his own.

If you find that you’re feeling emotional, remember that you’re facing a major life transition. Even if your child is going to college nearby and will be living at home, the transition from high school to college signals the end of her childhood. She is going to be increasingly independent and you’ll be involved in fewer areas of her life — and that is how it should be. Acknowledging your feelings, keeping a journal, talking to friends (or to a mental health professional, if you are depressed), can help you cope. Elizabeth Ozer also recommends making some plans of your own. For example, take a class, plan a trip, join a book club, catch up with friends, start a new house project. If you take some small steps this year, you’ll have more support systems in place when your child leaves home.

It’s also OK to acknowledge your feelings to your child. Of course, you don’t want to make your child feel guilty or badly about going to college, but you can let him know you’re excited for him, and that you’re going to miss him, too. Talking about your mixed feelings may help him understand his own mixed emotions.

On the road to independence

Acknowledging your child’s experience and your own will help you manage the roller coaster of a year ahead, so will a clear understanding of your role during this stage of parenting. As children enter their preteen and then their teenage years, their relationship with their parents should gradually evolve from one of dependence to increasing interdependence, according to psychologist Ozer. By your child’s senior year in high school, your relationship should be primarily one of interdependence, which means that it’s appropriate to allow your teen more freedom and responsibility, even as you make your expectations clear.

“Senior year is a time for parents to step back and to bring your teenager into the decision-making process,” says Duffy. “Instead of mandating a curfew, for example, ask your teen, ‘What curfew do you think is reasonable?’ and take his or her suggestions seriously, even if it’s a little later than you’d like. Soon your child is going to be a sole decision maker, and they need practice. Senior year is a good time to practice self-monitoring, and even to make some mistakes.”

Stepping back also means letting high school seniors take the lead on college applications. “I told my son, ‘I’m here as a consultant.’” Duffy says. “You’re communicating on a different level with your child: it’s more collegial, less parental, and it’s something he’s more likely to respond to.” If your child is going to college but will be living at home, it’s a good idea to start establishing this new level of communication now.

Step back, the experts agree, but have clear expectations. One Berkeley mother had never given her son a curfew because he always came home at a reasonable time. Then one night during his senior year he didn’t come home and didn’t answer his phone. He decided to sleep over at a friend’s and his phone battery was dead. “I told him, ‘Checking in is a common courtesy I’d expect from anyone living here.’”

Ozer advises parents to focus on the big picture. “Figure out what your family priorities are. You want everyone home for dinner every night, for example, or you want all the chores done before your teens go out. Have a few ground rules, then try to step out of the nagging role as much as you can.”

Last but not least, savor your child’s’ last year of high school, Ozer advises. “Enjoy your kids while they’re still at home. Be engaged in as many of their activities as you can be — go to their soccer game, go to their shows, chat with their friends when they drop by. Remember that your child is going to be gone soon, and you’re going to miss him.”