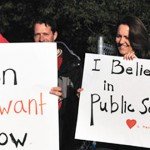 Parents versus the budget

Forget about chanting, "The people united ..." These four parent groups are fighting to save education funding using snow, social media, and serious lobbying.

As school districts across the country are forced to slash budgets and fire teachers, parents are responding in different ways to the barrage of bad news. Not surprisingly, protests have been the norm.

California’s “day of action” erupted in protests statewide, resulting in more than 100 arrests and a freeway closure in Oakland. In Olympia, Wash., parents marched on the capitol carrying a coffin that said “RIP education.” In New York, where schools are looking at a 5% cut, thousands of parents, students, and staff rallied at City Hall, calling for the state to increase spending for public schools.

But parents in some districts are taking a different approach, attempting not to lend their voices to the hue and cry but to contribute new solutions. Some are leveraging social media to get organized, some are pushing for policy changes, but all are proving that parents really can be a force for change.

In Cupertino, Calif., parents and school staff have teamed up to raise part of the schools’ projected $7.3 million deficit themselves. Called Their Future Is Now, the coalition has set a goal of raising $3 million to save 115 teachers.

The group “steps in where state funding leaves off to keep our schools academically sound and nationally competitive,” according to its website. The idea is powerful in its simplicity: If every family in the district chips in $375, the group will meet its goal. (Of course, this kind of undertaking works best in affluent communities with relatively small shortfalls.) Volunteers are also soliciting local businesses and philanthropists to add to their fundraising totals.

The district is looking at long-term solutions, so the fundraising effort is designed to be a one-time thing, says the site. But if the campaign succeeds, it will offer a model for other parent groups to skip marching in the streets and effect change with their checkbooks.

Take it to the top

In Northampton, Mass., school budgets have been cut every year for the past decade, leaving the district struggling to keep art and music programs, even transportation. Tired of fighting for their piece of the pie, a group of parents decided to take their complaints to the top. They formed a coalition (originally called Northampton Education Action Team and now Yes Northampton) to research state budget issues, campaign locally to raise taxes, and advocate for more money from the legislature.

Last year the group ran a successful campaign in Northampton to override the state’s tax-limiting statute, thereby netting $2 million for the schools. And though the local initiative was successful, the parents quickly realized the problem wasn’t just in their city — and it wasn’t just with education funding — so they’re branching out. Yes Northampton is now focused on developing statewide coalitions to tackle funding problems at the source: the legislature.

“We can’t do this town by town,” says cofounder Jane Fleishman. The group is working to team up with others across the state to lobby the governor for increased funding for fire departments, police, schools, and all other public services. How it will handle the current budget crisis remains to be seen: Once again, Northampton is facing another large deficit, and schools are expected to suffer for it.

Parents in Richmond, Va., have turned to social media to galvanize support for their schools, which are facing a statewide cut of more than $1 billion. The Facebook group Metro Richmond Parents Against Cuts in School Funding has become a focal point for those fighting the cutbacks. The group uses the site to organize rallies, make calls to legislators, and share news from the trenches. “A woman told me that her son … will be in a class of 35 students,” says one post, referring to the increased class sizes that are being threatened.

With more than 700 fans, the page has become a clearinghouse for information on what’s happening in other school districts, with parents and organizers posting relevant news stories from around the country. “Glad to find this group!” writes one parent. “What else to do before it’s too late and the school budgets get gutted?”

This kind of online activism may be the wave of the future, as busy parents can connect without having to hire sitters or ditch homework duty.

In the tiny town of Carbondale, Colo., teachers and staff from a K-8 charter school hit the slopes to raise awareness of looming budget cuts in their district. At a relay race on Sunlight Mountain Resort, the Carbondale Community School fielded a team to ski down the mountain continuously from 8 a.m. to 8 p.m. The staff and teachers used the race to draw attention to the cutbacks, which threaten the school’s physical education and art programs. Although “skiing for schools” isn’t a practical gimmick for all districts, the group showed how to create a unique event to drum up publicity for its cause.

Faced with ever-shrinking budgets, school districts nationwide are being forced to take drastic action — including school closings, widespread layoffs, increased class sizes, shorter school years, furloughs, and program cuts. As that reality looms closer, more parents may find themselves moved to get involved in any way possible to save their schools. Will parent groups gain enough steam to combat the massive shortfalls schools are facing? Well, if we’ve learned anything from groups like Mothers Against Drunk Driving, it’s that when you mess with their kids, parent power has no limits.