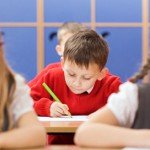 A quick definition of parochial schools.

A parochial school is a church-run primary or secondary school. Parochial comes from the Latin word “parish” and usually refers to schools run by the Catholic church, but they can also refer to schools run by other religious denominations, including Protestant churches. They provide religious education in addition to traditional academics. Parochial school students make up the majority of enrollment at private schools in the United States. Parochial schools tend to be more affordable than other nonreligious private schools.