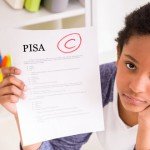 Advertisement
Parenting » Education trends » How does your school compare to the world’s best?

How does your school compare to the world’s best?

Yet again, the U.S. has received mediocre PISA scores. A new opt-in test is giving schools a chance to see how they rank internationally … and how to improve.

You’ve likely heard the sobering news: the most recent PISA (Programme for International Student Assessment) results are in, and American students once again made a lackluster showing.

In math, the U.S. ranked 36 out of 64 nations – after Lithuania and just before the Slovak Republic, and far below wunderkinds like Korea, Japan, and Switzerland. Other countries outpacing the U.S. on international achievement tests is nothing new. As students in countries like Ireland and Poland have made impressive achievement gains, PISA results for American students have remained stagnant over the last decade.

As you read relentless headlines about underwhelming U.S. scores, have you ever wondered how your child’s school performs compared to international benchmarks?

Now you can find out — if your school is up for the cold, hard truth — through a new, opt-in test based on PISA.

But first, what is PISA, anyway?

Designed by the Organization for Economic Cooperation and Development (OECD) and first administered in 2000, PISA tests 15-year-olds in 65 developed countries in math, reading, and science.

PISA isn’t your typical standardized test. It measures skills that are essential in our high-speed, information-saturated world: critical thinking and problem solving. In her book, The Smartest Kids in the World, Amanda Ripley points out that, in contrast to previous international tests, “The promise of PISA was that it would reveal which countries were teaching kids to think for themselves.”

Jack Buckley, Commissioner of the National Center for Education Statistics, told NPR that PISA is like a thermometer: “It tells us where we stand. It tells us whether we’re improving or not.” Riffing on Buckley’s analogy, reporter Claudio Sanchez observed that, if PISA is a thermometer, “The U.S. appears to be bedridden with a fever, while other countries are getting healthier and stronger.”

How strong is your school?

PISA provides valuable insights into our country’s education maladies on a systemic level, but it doesn’t give individual schools information about learning gaps among their own students. Enter America Achieves. a national nonprofit that worked with the OECD to develop a test based on PISA, called the OECD Test for Schools.

Like the PISA exam, the OECD Test for Schools measures 15-year-old students’ math, reading, and science skills. In 2012, the test was piloted in more than 100 U.S. schools. Following the test, each school received a report detailing that school’s strengths and weaknesses, how the school compares to other schools in the U.S. and overseas, and information on best practices from high-performing schools around the world. The OECD Test for Schools also includes student surveys that measure school climate issues known to affect achievement, including disciplinary style, students’ attitudes toward learning, and student-teacher relations.

Now that the pilot is over, America Achieves is making the OECD Test for Schools available to every high school in the country through its Global Learning Network. Participating schools receive detailed reports, and school administrators will have access — through webinars — to peers at other participating schools so they can share information and ideas. There’s a substantial fee to participate: $8,000 (American Achieves will offer subsidies in some cases). The fee covers costs for CBT/McGraw Hill, which administers the test, analyzes the results, and produces the reports. America Achieves, a nonprofit, receives no financial benefit.

Lessons from the test

According to an America Achieves survey of a select group of administrators at 2012 pilot schools, the students’ scores and survey answers from the OECD Test for Schools are making a difference.

At North Star Academy Preparatory High School in New Jersey, students received average scores in math and science on the OECD test. A close look at student survey responses revealed the likely cause: many North Star students don’t consider their science or math classes relevant to their lives or future career plans. In fact, only 6 percent of the school’s graduates planned to pursue STEM careers. This year, the school is putting more emphasis on hands-on science, collaborating with other schools that have strong STEM programs, and initiating science research projects for all seniors.

If PISA charts the health of the U.S. education system, the OECD Test for Schools gives individual schools a more focused look at how their students are faring. Using the report, America Achieves Program Director Carolyn Trager Kliman says that schools can “make changes in school practices. They can have candid conversations with parents and families about where students are — and what needs to be done to get students to a higher level.”