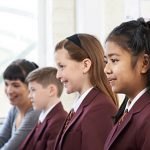 Advertisement
Parenting » Find a school skills » Should I send my child to a private school?

Should I send my child to a private school?

Expensive and elitist? Smaller classrooms and a better education? Maybe, maybe not. Get the lowdown on a private school education.

Only the rich can send their kids to private schools.

There is no shortage of strong opinions about private schools, one of the biggest that they are only for the wealthy. While the stereotype persists, the average private school student is probably not a member of the upper crust. Nowadays, a surprising number of families who send their children to private schools are scrimping and taking out loans to do so.

About 5.5 million students attend private schools throughout the U.S., according to the Council for American Private Education’s most recent survey. That’s about 12 percent of all elementary and secondary school students nationwide. Many of those private schools are in urban and blue-collar enclaves where few of the elite would venture. But because of a bad economy and rising tuition, enrollment has dropped in recent years.

Catholic schools make up by far the largest number of private schools in the country. There are also a significant number of Christian and Jewish private schools, as well as nonsectarian schools like Montessori and Waldorf. Some private schools offer a progressive, more liberal education. Others feature a more orthodox approach, tempered with religious training. Some schools focus on learning through the dramatic, visual and musical arts, while others specializes in foreign languages, mathematics, and the sciences.

The truth about private schools

While the debate rages about how private schools stack up against public schools, there are some things we know for sure:

Questions to ask about private schools

While it can be difficult for parents to know if a given private school is right for their child, the best way to know is through the school visit and by talking to school administrators. Parents and children can easily be overwhelmed by the selection process, but are well advised to be selective as well.

Don’t shy away from asking probing questions about the school’s curriculum, culture, and disciplinary policy, as well as how it keeps parents involved and what it expects from parents – both in terms of time and money. Here are tips on what to consider when visiting a school.

Financial aid: show me the money

With tuition skyrocketing at many schools, the biggest question many parents ask is how to pay for it. It’s no wonder that even families in high-income brackets seek financial aid. According to SmartMoney, about one in five families applying for financial aid from a private school had an income of more than $150,000 a year. Does it make sense to take out a loan to send a kindergartner to school? That’s a question best left to individual families, no matter what their income. Plenty of low-income families make private school a priority, and many do so with financial assistance. That help can come from several sources:

Each school should have a financial aid office or manager that can help identify programs that help pay for tuition. Remember that applying for admission to a private school and applying for financial aid are two different processes, and the deadlines can vary. Finally, financial aid forms can be a paperwork nightmare (and have far earlier deadlines than the application), so start the work early and get help from the school if you need it.

The NAIS has an online financial aid form that many schools ask parents to fill out, and while still time-consuming, can make applying for financial aid slightly more manageable. The form can be completed online or printed out and mailed in, and parents can submit it to several schools at a time. For students applying to schools in a region with vouchers, there is often a lengthy application process as well. Don’t wait to begin researching how your area deals with vouchers and whether the school of your choice accepts them.