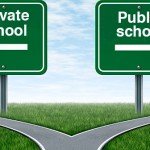 Some differences between public and private schools are obvious. But deciding what's right for your child entails shedding light on the subtle distinctions many parents ignore.

Private versus public! It’s a debate that rages across the playgrounds and living rooms of America. In fact, according to a 2009 GreatSchools and Harris Interactive poll, nearly one in four parents are currently considering switching their child’s school either from private to public or public to private as a result of the economy.

What’s better for your youngster? How can you compare private and public schools when they seem so disparate? Is it like comparing apples and oranges — two different things that can’t be fairly held to the same standards?

As any parent who has toured both kinds of school knows, it’s not always easy to answer these questions. Many people have a bias one way or another. Some assume that private schools offer superior everything, justifying their tuition costs. Others contend that public schools provide more real-life experiences or, in some cases, more-developed specialty programs in athletics or science.

While this primer won’t dare takes sides, it will touch on the most fundamental differences between public and private schools — as well as a few subtle distinctions that might make all the difference for your child.

The most obvious discrepancy between public and private schools comes down to cold, hard cash. The good news for parents is that public schools cannot charge tuition. The bad news is that public schools are complicated, often underfunded operations influenced by political winds and shortfalls. Financed through federal, state, and local taxes, public schools are part of a larger school system, which functions as a part of the government and must follow the rules and regulations set by politicians.

In contrast, private schools must generate their own funding, which typically comes from a variety of sources: tuition; private grants; and fundraising from parents, alumni, and other community members. (Ever wonder why private schools celebrate Grandparent’s Day and public schools don’t?) If the school is associated with a religious group, the local branch may provide an important source of funding as well.

For parents this quickly translates into the bad news: high tuition costs and sometimes an exhausting work calendar of parent-sponsored fundraisers. According to the National Association of Independent Schools, the median tuition for their member private day schools in 2008-2009 in the United States was $17,441. Tuition for boarding schools was close to $37,017. (Of the 28,384 private schools in the United States, about 1,050 are affiliated with the NAIS. Average tuition for nonmember schools is substantially less: Day schools charge $10,841 and boarding schools $23,448.)

Parochial schools are even more affordable. The National Catholic Educational Association reports that the mean tuition for parish elementary schools is $2,607 and $6,906 for the freshman year of secondary school. (Thank you, Pope Benedict XVI!)


The potential benefits of private schools accrue from their independence. Private schools do not receive tax revenues, so they do not have to follow the same sorts of regulations and bureaucratic processes that govern (and sometimes hinder) public schools. This allows many private schools to be highly specialized, offering differentiated learning, advanced curriculum, or programs geared toward specific religious beliefs. There are exceptions to such generalizations — charter and magnet schools are increasingly common public schools that often have a special educational focus or theme.

Another obvious distinction between public and private schools results from their respective admissions procedures. By law, public schools must accept all children. In many cases, enrolling your child involves little more than filling out a few forms and providing proof of your address to the local school district office. In practice, however, getting your child into the public school of his or her choice can be much more complicated.

Because not all public schools have resources for helping students with special needs, enrolling a child with a learning disability or other disorder may entail a more complex process. Similarly, in school districts with “school choice” policies, the procedure for finding a public school may require that parents enter a lottery to gain admission for their child into their top pick. Finally, at the high school level, many districts in larger metropolitan areas offer special schools with competitive enrollment based on students’ GPAs or artistic portfolios.

Private schools, by their very definition, are selective. They are not obligated to accept every child, so getting admitted may involve in-depth applications with multiple interviews, essays, and testing. Because private schools define the identity of their communities, they often pick and choose between candidates based not only on their scholastic achievement but also their ethnicity and religious background — as well as the special attributes (or assets) of their parents.

While most people assume that teachers at private schools are as qualified as those at public ones, it’s important to note that all teachers in a public school are usually state certified or, at a minimum, working toward certification. Certification ensures that a teacher has gone through the training required by the state, which includes student teaching and course work. Teachers in private schools may not be required to have certification. Instead, they often have subject-area expertise and an undergraduate or graduate degree in the subject they teach.

There’s a similar discrepancy between curriculum development in private and public schools. Public schools must follow state guidelines that set out specific standards and assessment procedures. In theory, this creates a certain amount of quality control. Private schools, on the other hand, can choose whatever curriculum and assessment model they wish. This freedom to design their own curriculum or avoid standardized tests can result in higher standards for students — or lower.

Many states recognize the value of small classes and have provided funding to keep class sizes small in grades K-3. As students advance to higher grades, class size tends to get bigger in public schools, especially in large school districts and urban schools.

While many private schools provide small classes with low student-to-teacher ratios, there is no guarantee that such schools will keep their class size below a certain level. Some private schools — Catholic ones, in particular — traditionally have larger classes than public schools.

Due to special education laws, public schools must educate all children and provide the necessary programs to meet their special needs. This means that all school districts have special education programs and teachers who are trained to work with special-needs students.

How do you know what’s right for your child?

Don’t rely on hearsay and rumor when it comes to deciding between private and public. Visit the schools and ask the teachers lots of questions. Read school profiles on GreatSchools. At the end of the day, the best school for your child is a highly personal decision based on your family; your values; and, most important, the special needs, idiosyncrasies, and interests of your kid. Let the debate rage on, but don’t forget about the one person for whom this decision is far more than sandbox banter.

Testing at private vs. public schools

A Harvard University study (pdf) challenged the results, using the same data but different methods. Researchers found that private schools came out ahead in 11 of 12 comparisons of students.

But as a dissenting view from the Thomas B. Fordham Foundation’s Education Gadfly newsletter showed, the debate over which kind of school does a better job is far from settled.