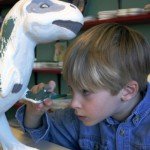 Project-based learning: the pros and cons

Many schools claim to do project-based learning, but do they really? And what are the advantages of this kind of academic focus?

Technology teacher Bruce Lubak’s noticed a difference in his students since he began using projects to teach engineering skills at Parkland High School in Allentown, PA. Lubak couldn’t get over how passionate his kids were about their designs, pleading to tinker with them long after the projects were over.

One student designed a replica of a local roller-coaster ride at a nearby theme park. Another created a small-scale model of an elevator with the help of his father, who works at the Otis Elevator Company.

“Most students are motivated to have success. They want to see [their project] work. They want everyone in the class to see it work,” Lubak said. “They want to keep working on it, even after the project’s done.”

If Lubak’s classroom sounds little like the classroom you attended, you’re not alone. For decades, parents expected to see a teacher standing in front of a class lecturing or reading from a textbook.

But more classrooms around the country are looking a lot like Lubak’s. It’s an example of what’s called project-based learning (PBL), hands-on instruction that’s been around since the early 1900s. Supporters point to a growing body of research that shows that hands-on instruction is more effective than traditional methods for teaching everything from math and economics to social science and science classes.

Projects help students learn how to work independently and discover the answers to their own questions. By also learning to complete projects in teams, students gain communication and leadership skills that they can adapt to the real world. Finally, supporters say, the knowledge students gain from solving advanced mathematics and science problems will help them develop 21st century skills to work in a global economy.

“Many people are concerned that our international competitors are going to have more of the world market,” said John R. Mergendoller, the executive director of the Buck Institute for Education, which helps train teachers in project-based learning. “They want to make sure our kids can compete.”

Although there are no statistics to show that project-based learning is growing, supporters say there’s evidence more teachers are using projects to instruct students than they did a decade ago. In the year that ended in June 2004, for example, the Buck Institute helped train about 850 educators across the country in project-based learning. This year, Mergendoller expects that number to grow to 9,500.

Here’s how project-based learning works: teachers conceive of a project and may even do their own first. It can be literary work, a mathematical model, or as in Lubak’s case, an engineering design. Then the teachers work backwards to design lessons that will provide the skills students need to learn. Along the way, the teacher sets deadlines, helps students figure out the steps to create their project, and offers continual feedback.

At the end of the semester, there’s no test. Kids get to show off their know-how in a gallery show of their work. If appropriate, students could also create a website for the public to use, even actual products. The chance to get feedback is important, because it gives kids the chance to talk about their work and answer questions that might not have asked themselves.

If there were a laboratory to train America’s future Thomas Edisons and Marie Curies of the world, it might look a lot like a project-based classroom. Learning with a project in mind gets students thinking about the tasks and resources they need to take to complete a goal.

In a project-based learning classroom, the teacher’s role is to guide, not to give students the answers to their questions. If a student needs to draft engineering plans on a computer, for example, he or she would have to master computer design software first.

Students organize their tasks and find resources for their project. This might involve foraging for what they need in the field or working with local business leaders with the resources to help out. Teachers of project-based classrooms believe in trial and error can be a valuable lesson.

“What we’re trying to do is teach kids to be problem-solvers, to think creatively,” said Anne Jones, senior vice president and chief program officer at Project Lead the Way, a nonprofit that provides science, technology, engineering, and mathematics (STEM) curriculum used at over 4,200 schools nationwide. “If there’s an obstacle in their way, and they know this is the right thing to do, kids figure it out. They partner with another school. They partner with a company.”

In some cases, what students accomplish is astounding, even patent-worthy:

Not all projects are as global as finding solutions for disaster relief or stopping illegal animal trade. It doesn’t have to be expensive either. Lubak has developed projects for his students that involved used toy or mechanical parts.

When Michael Delorio, a 16 year old who attends the California Academy of Mathematics and Science, a public high school in Carson, CA, designed an air cannon that launched ping-pong balls 80 to 100 feet into the air, he built it with $40 worth of polyvinyl chloride pipes and a sprinkler valve. First, however, Delorio and his team had to learn computer design software to draw the device, piecing the launcher together like a puzzle.

“It was hands-on, and it suits the way I learn better,” Delorio said. “I prefer to touch and feel it rather than learn about it from a book.”

After the launcher was built, the team went to a field with the machine and used a chronometer to track how fast the ping-pong balls traveled: 400 feet per second. Since then, Delorio has gone on to design small robots and other mechanical devices in national robot competitions. Delorio hopes what he has learned so far will propel him into a college robotics program.

If college is the goal, then projects are one way to get a student used to rigorous research habits. According to Project Lead the Way surveys, 97 percent of kids who went through the group’s STEM programs planned to pursue a four-year degree, compared with 67 percent of students who did not go through the group’s programs. Students who took Project Lead the Way courses were at least five times more likely to pursue engineering and technology classes than other first-year college students.

Working on robotics, examining animal meat, and inventing disaster relief devices may be rigorous, but they all have one thing in common, said Jeff Robin, an art teacher at High Tech High in San Diego.

“It’s gotta be fun. The more fun the project is, the more interested they’ll be, the more they’ll learn,” he said. “In fact, I have parents say, ‘I’m really concerned. My kids really like school. My kid’s having too much fun.’”

When Robin asked his art class to create a graphic novel based on novelist Kurt Vonnegut’s short stories in “Welcome to the Monkey House,” students had to learn drawing techniques, storyboarding, and dramaturgy, the skills to write a play or drama. They also had to learn about computer programs they needed to scan and publish a book of their artwork. They even held a gallery exhibition to talk about their work.

Robin said students learned more about writing and illustrating Vonnegut’s works than they would have if they had simply read his short stories and wrote a book report. “It’s more about personal interest. It’s about finding an idea about where you fit in,” he said. “The sky’s the limit.”

What to look at when considering a project-based school

Mergendoller, the executive director at the Buck Institute for Education, believes schools, not individual classrooms, should offer project-based learning at different grade levels in order for students to build on their skills. In lower grades, beginners train with short activities that lead up to longer projects that can last several weeks or months.

How to determine commitment to project-based learning