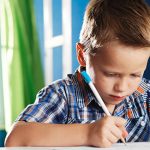 Many parents think their kids are overscheduled. After school they have a commute home, a meal to eat, and homework to do — not to mention extra activities guaranteed to “enrich” them. Parents sometimes feel like scheduling writing won’t leave any time for what kids do best: playing. How do you get kids to write without feeling like a drill sergeant?

When kids make up games, they invent rules, which should be written and posted. Hang up a whiteboard wherever they play so that your child can write on it. Write this at the top of the whiteboard: “Writing is part of pretending.”

Try this: Whatever your child likes to play, try to think of ways to include writing. For example, playing restaurant can include menus and little waitress pads. Police officers write tickets. Robbers consult maps of the bank. Playing house would include cooking, thus writing out recipes, grocery lists, and to-do lists.

Don’t worry if you’ve never heard of The Penguins of Madagascar. Most of today’s games come from ones you played as a kid. If your 7-year-old says, “The penguins need to spy on the lemurs to bring home the blimp,” go along for the ride with a writing suggestion. Say, “This spy mission needs a map and a written plan! Write it in invisible ink!”