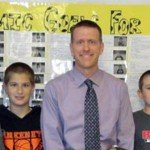 Think tweens and teens don't listen and don't care? Think again. If this seventh grade math teacher can get kids to be kind and work hard, you can, too.

A few months ago, Trish Tingler and her teenage daughter Kelsey found a note from her middle school days in a box of keepsakes. The note, Trish recalls, meant a lot to her at the time. “As for what it meant to Kelsey,” she writes, “all I can tell you is she immediately took the note and placed it front and center on our refrigerator.”

Under the heading “Caught Being Good,” the note lauds Kelsey for her hard work and determination. It came from Mark Schumacker, a teacher who regularly sends notes home when he sees students being kind or working hard in class. With its dorky font and homemade look, it’s the last thing you’d expect a middle schooler to respond to — especially since it came from her seventh grade math teacher.

Teaching an oft-reviled subject to the most ugh-inducing of stages, Schumacker has a job with notoriously high turnover. His students are at an age when parents endure a spike in eye-rolling and a reticence to engage in almost everything. Some parents exhaust themselves trying to break through the hormone-induced self-absorption. Others simply give up, concluding that middle schoolers just can’t be reached. Yet this buttoned-up math teacher, who looks more like a tech exec, has discovered how to do the near miraculous — help his middle school students learn and even enjoy math while teaching them how to be kind, hardworking kids.

“Believe it or not,” he says, chuckling, “seventh graders once told me in a class meeting that I didn’t give enough homework.”

Schumacker, who teaches at Herman K. Ankeney Middle School in Beavercreek, OH (GreatSchools Rating 9), has success as the result of a unique teaching approach that combines math curricula with what’s known as character education, which teaches kids important qualities like honesty, empathy, and determination. The ultimate goal is to inspire them to excel in school and in life.

Character education has been gaining attention and momentum both within the U.S. and abroad as studies find that social-emotional learning (SEL, also often called EQ) goes hand in hand with higher test scores, increased attendance and graduation rates, more engaged students and staff, and better behavior. According to a 2008 Casel (Collaborative for Academic, Social, and Emotional Learning) report on three scientific reviews,“SEL programs improved students’ social-emotional skills, attitudes about self and others, connection to school, positive social behavior, and academic performance; they also reduced students’ conduct problems and emotional distress.”

Incorporating character education into curriculum isn’t easy, but it pays off. Data from the Character Education Partnership’s 2011 National Schools of Character showed all reporting schools have increased their state reading and math scores and/or earned passing rates above 90 percent.

For one, he’s discovered effective ways to reach the kids. His classroom walls are lined with handmade posters. Words like “honesty,” “perseverance,” and “opportunity” are written next to words like “gossip,” “put downs,” and “swearing” — with slashes through them. These posters surround the clock where, says Schumacker, “kids’ eyes tend to go first.” Instead of the daily roll call, he starts class with a question of the day: ‘What’s one song on your iPod?’ or ‘Did anyone give you a compliment today?’

The daily question helps his students feel heard, he says, and it’s an unqualified hit: “In every single class it’s one of their favorite things.” Also popular are weekly writing prompts, which are typically responses to a moral character challenge — focusing on trustworthiness, respect, responsibility, fairness, caring, or citizenship — such as not complaining for a day or naming someone they’re grateful for. Recently, he asked the kids to write about what’s helped them be successful (or not) in his class. The answers show tremendous insight on the part of the seventh graders — a group seldom credited with deep thinking. Kids who aren’t faring well academically own up to causes like laziness and not trying. Others opened up about problems at home, such as financial stress and divorce. But nearly every student who wrote about academic success credits Schumacker’s revisions policy, which allows them to redo missed homework and test questions. His revisions policy is part of a performance character lesson — focusing on effort, goal setting, and perseverance — that helps kids take ownership of their learning.

Methods to avoid the madness

Schumacker uses an almost scientific trial-and-error approach to improving his craft — each time with the goal of better reaching and teaching his students — though parents aren’t always immediately on board. Tom Lickona, one of Schumacker’s mentors and director of SUNY Cortland’s Center for the 4th and 5th Rs (Respect and Responsibility), recalls: “He got notes from parents saying, ‘My daughter never liked math and I disagreed with your high expectations in math, but now she feels differently and knows what A work looks like.’”

Over time, Schumacker’s overcome the urge to force kids into submission. For a while he required struggling students come to class at lunchtime. “It became clear I could force them to come at lunch every day, but I can’t force them to work hard,” he says. To avoid the inevitable (and unproductive) stand-offs, he created his revisions policy to encourage students to improve their work of their own volition. Perhaps thanks to his counseling degree, he’s cultivated a safe, open environment for class meetings, where kids can give him feedback. “If something’s not working, [they] can tell me,” he says. “I won’t be mad.”

For Schumacker, success is about more than scores; it’s about instilling a passion for excellence in learning. Sally Coberly-Hough says her son Mark learned the nuts and bolts of hard work — and the value of it — in Schumacker’s class. It was laborious for both mother and son, she wrote in an email, but “it paid off!” Julie DiNapoli says her three daughters learned lasting lessons in Schumacker’s class, too. Now in high school, “they still look back at their notes from his class,” she says.

Schumacker takes it a step further with performance character education. In 2008 he met Lickona and his colleague Matt Davidson, who taught him about class meetings, setting goals, and letting kids redo missed problems. “[It] was my ‘Aha’ moment,” Schumacker says. “Everything I do comes from them.”

It starts with kindness

Recently, a student gave Schumacker the ultimate compliment: “You definitely taught me how to be a better person.” The accolade echoes the “Caught Being Good” messages that Schumacker uses to model kindness while inspiring kids to do their best. And it’s a sign that his character lessons, which always start with kindness, are working. “It’s almost a self-fulfilling prophesy,” he says. “If you tell them they’re an amazing student, they live up to it.”