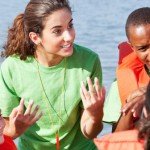 Filling in the gaps in your child’s education this summer

Since so many schools have dropped art, electives, science labs, and more, specialty summer camps are picking up the pieces.

Looking at my daughter’s schedule makes me wonder whatever happened to those lazy, hazy, crazy days of summer. Only a couple of years ago she was hanging at the local park with a cheap and dirty “kids in a sandpit” summer camp. Now my daughter is experiencing a different sort of fourth-quarter learning. We’re talking enrichment with a big, expensive E.

One week of art camp, three weeks of writing camp in the morning and math tutoring in the afternoon, then two weeks of Spanish-immersion mornings followed by martial arts training. I don’t consider myself one of those obsessive, “only the best for my angel” mothers. But our daughter goes to a science and arts magnet where there’s virtually no science and arts funding left. So these “extras” seem essential.

Does your child’s summer look like a patchwork quilt of educational best practices, or do other factors take precedence when choosing a camp program?

According to educational specialists, parents who send their children to a wide offering of summer camps to make up for a lackluster school year are hardly alone. Since public schools have been forced to cut enrichment and specialized academic programs, many parents are using summer as a way of giving their children what the school year no longer gives them: arts, athletics, science, foreign language, sometimes even core academics. Indeed, there’s a growing body of evidence that summer programs can make a significant difference in the trajectory of a child’s education and are especially important for low-income children who are more likely to fall behind academically during the summer. A report from Summer Matters evaluating three summer programs in California found that participants gained academic skills and developed stronger work habits and social skills compared to their peers.

Parents have always relied on summer programs to enrich school-year learning, says educational consultant Steven Roy Goodman. But budget cuts at public and even private schools have forced students to supplement their education with specific types of programs. In the lower grades, this usually takes place at specialty camps. At the high school level, it may mean signing up for adult education. “A number of students interested in being competitive Caltech or MIT applicants have had to enroll in summer courses at community colleges or local universities in order to take advanced math courses that used to be offered as an independent study at their high schools,” Goodman explains.

John Aulabaugh’s plans for his eighth grade twin boys this summer shows how specialty camps can contribute to an ambitious educational strategy. In hopes of getting his twins into the highly regarded Thomas Jefferson High School for Science and Technology in Alexandria, Va., Aulabaugh has planned a June-through-August academic extravaganza. “We have them in Space Camp at Cape Canaveral and two weeks of Tech Camp in the school system here,” he says. “Following that will be a trip to the Jet Propulsion Lab in Southern California and a trip to Genentech.”

“This is a trend we’re seeing especially with the changes in school programs,” says Marla Coleman, former president of the American Camp Association (ACA) and founder of Coleman Country Day Camp on Long Island. “Parents want to provide their children with every educational edge.”

The nation’s summer camps continue to fly high. According to the ACA, enrollment is strong and many camps have plans to expand.

Since summer camps don’t need curricula, grading systems, or accreditation, says Coleman, they can respond quickly to parental desires. She says science-based specialty camps in areas like archeology, technology, and astronomy are on the rise, as are academic tutoring programs. Her own day camp offers individualized tutoring in core subjects for children who might otherwise have been shipped off to summer school.

Are specialty summer camps another way we’re driving our children to be neurotic overachievers? Or are they simply the only means of giving students enrolled in cash-strapped schools a well-rounded education? And what will happen to those kids whose parents can’t afford the luxury of all these academic add-ons?

Whether you see the trend as a positive twist or positively twisted, there’s no doubt that the rise in specialty camps reflects parents’ dogged determination to compensate for the nation’s educational woes. And given the budget shortfall many school districts face, summertime outsourcing may be here to stay.