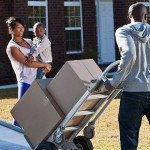 A moving survival guide for families relocating in tough times.

Yes, the U.S. economy might be improving, but the national unemployment rate is still about 5.5%, forcing many parents to look for work in cities they might not have considered before. Job opportunities vary widely by region too: while the unemployment rate in Nebraska is 2.5 %, Nevada’s and the Washington, D.C.’s remain above 7%.

Uprooting a family can be especially hard on children because they have to leave behind familiar friends and neighborhoods and adapt to the academic and social setting of a brand-new school. Wondering how to make the process less painful? Whether you’re moving across the state or across the country, we’ve got the tips you need to make a smooth transition.

Families considering a move face a potentially overwhelming array of choices about timing and logistics. Move right away? Wait until the end of the school year? Commute long distance? Split up the household while the parent with the new job settles in?

When it comes to minimizing kids’ stress, timing is especially important: Experts agree that it’s better to move during the summer. Jodi Goldberg, the executive director of GreatSchools Milwaukee, cautions against switching schools mid-year, citing studies that suggest it’s much worse for children’s education to move during a school year — even if their current school is merely mediocre.

Waiting until summer gives students the opportunity to finish a grade without interruption, say their goodbyes to friends, and start the next school year with a clean slate. And it’s usually easier to make friends and adjust to new surroundings when your peers are doing the same thing.

Once you’ve decided when to move, you’ll need to tell your children, and how you do it will depend on their ages. For younger kids, you may need to explain what it means to relocate — draw pictures, act it out, or just find a way to explain the process in the simplest terms. For tips on getting the conversation started, check out these recommended reads for preschoolers and elementary schoolers. A visit to your new home ahead of the moving day could quell fears and anxiety about the place and even give your family a chance to meet the neighbors.

Older children and teens with more-established social lives might be upset (and understandably so). Parents should be prepared to face complaints, accusations, or guilt trips.

But you don’t have to dismiss these emotions outright. One mom, Nancy Masterson, moved several times with her family, ultimately landing in Jacksonville, Fla. Her approach mixed empathy with firmness. “In all of our moves, I felt that acknowledging our children’s feelings was important when they didn’t want to leave their friends,” says Masterson. “At the same time, we treated each move in a very matter-of-fact manner.”

Facing hard times, Sonali Morris, now an employee at GreatSchools, moved her family from a small town near Cleveland to Detroit. But she took a direct, upbeat approach in talking about it with her kids.

“We decided not to shelter the kids from anything,” Morris says, “so we were always up-front about what was going to happen, how hard it would be, and what it meant for them. They knew they’d be leaving familiar friends and places, but I made sure to emphasize all the positives about where we were headed. I told them they would be able to call, Skype, and write their friends to keep in touch.”

From a parent’s perspective, one of the most headache-inducing issues is finding a school for your kids. The new school district may have idiosyncrasies that are hard to predict from afar, so it’s important to do your research ahead of time. Some of the best resources are online, and GreatSchools can help simplify the process with our school ratings and parent reviews. Be sure to check out our guide to choosing the right school for step-by-step advice as well as these insider tricks from our resident school-choice expert, Jodi Goldberg, on picking the best preschool, elementary school, middle school, or high school .

Once you’ve settled on a school, the next challenge is helping your kids fit in and make connections. Morris worked to make sure her kids wouldn’t get lost in the crowd. “I met with the principal of the kids’ schools and gave them postcards I made,” she says. “The front said ‘Hello. My name is ___’ with pictures of the kids. The back gave some info about us along with our contact information. I invited parents to call us as soon as we moved in so the kids would have some familiar faces.”

Child and family therapist Ron Taffel urges parents to help their children practice the transition by visiting the school before classes start and giving them a chance to socialize with new neighbors and school employees.

“If you can manage, host a simple afternoon get-together at your house in which you’re essentially practicing the art of becoming a good neighbor and doing some proactive matchmaking — setting your children up with a few other kids in the comfort of your own home,” says Taffel. “Kids’ relationships can form quickly and are very portable, often moving from the living room into the classroom.”

If moving to a new city is stressful, it can be stressful on parents and kids alike. Joining a community group is one of the simplest ways to get established in an unfamiliar place. Seek out people with common interests, but don’t be afraid to branch out and try new activities. For movers who find themselves in out-of-the-way places, online communities are an appealing alternative.

When Janet Grimes’s family moved from Nashville, Tenn., to Canton, Mich., it meant switching her daughter from an intimate, private Christian school to a large public high school. Grimes stresses the value of establishing ties to a new community: In her daughter’s case, beating culture shock involved “finding a good church and a few core friends that she sees on a regular basis.” And how’s her daughter faring? “She has responded beautifully,” says Grimes.

Once you’ve settled in, be especially sensitive to emotional changes in your children. Watch for mood swings because kids, like adults, can be susceptible to depression when dealing with major life changes, long-distance moves among them. Symptoms to look out for include irritability, social withdrawal, increased sensitivity to rejection, and difficulty concentrating. If you notice any signs, spend more time with your kids, talk to them about their feelings, or seek advice from a child psychologist.

Parents can set an example by maintaining an optimistic outlook to help keep negative emotions at bay. As Grimes advises other parents, “Stay positive so your kids will do the same.”