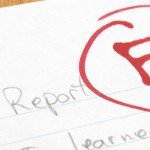 Why many schools are linking report cards to education standards (bye-bye letter grades) and how that helps students and parents.

Did your grandparents give you a dollar for every A on your report card? Did you ever receive a dreaded F?

For a growing number of today’s elementary school students, the days of celebrating or dreading letter grades are over. As schools and educators across the country focus on teaching content based on core standards, student report cards have changed to reflect this. From Nashville, Tennessee, to Marlborough, Massachusetts, elementary schools are using standards-based report cards that align with their standards-based teaching. As a result, parents are getting more information about their students’ achievement.

What are state standards?

Forty-two states, the District of Columbia, and four territories have adopted the Common Core State Standards, which are educational standards — not a curriculum — for English language arts (ELA)/literacy and mathematics for kindergarten through high school. Every state has educational standards, a list of the skills that students should learn at each grade level, for other disciplines as well, such as science, PE, social studies, and fine arts.
Teachers are responsible for teaching the skills for their students’ grade level, although the standards do not specify how teachers should teach. Education World has links to the standards for each state.

What are standards-based report cards?

On traditional report cards, students receive one grade for reading, one for math, one for science, and so on.

A standards-based report card lists the most important skills students should learn in each subject at a particular grade level. For example, in writing, a second-grade report card might list these skills:

Instead of letter grades, students receive marks or a code that show how well they have mastered the skills. The marks might show whether the student is advanced, proficient, basic or below basic for each standard or they might be numbers representing whether students meet, exceed, or approach each standard.

How it helps parents

The marks on a standards-based report card are different from traditional letter grades. Letter grades are often calculated by combining how well the student met his particular teacher’s expectations, how he performed on assignments and tests, and how much effort the teacher believes he put in. Letter grades do not tell parents which skills their children have mastered or whether they are working at grade level. Because one fourth-grade teacher might be reviewing basic multiplication facts while another might be teaching multiplication of two- or three-digit numbers, an A in these classes would mean very different things. The parent of a child in one of these classes would not know if their child were learning what they should be to meet the state standards.

Standards-based report cards should provide more consistency between teachers than traditional report cards because all students are evaluated on the same grade-level skills. Parents can see exactly which skills and knowledge their child has acquired. According to Hoover Liddell, former special assistant to the superintendent in the San Francisco Unified School District in California, the marks on a standards-based report card show only how well the child has mastered the grade-level standards, and do not include effort, attitude, or work habits, which are usually marked separately. Parents will want to keep tabs on these as well, even if these characteristics aren’t included in the assessment of the student’s academic skills.

Why are some districts are switching?

Diane Mead, a teacher on special assignment in the Beverly Hills Unified School District in California, believes students are the biggest winners when standards-based report cards are used. These report cards give students specific information about how they’re doing and pinpoint where they need to improve.

This approach can carry over to classroom assignments, too, as the report card influences the way teachers assess student learning throughout the year. In the first two years of using a standards-based report card in Beverly Hills, teachers worked together to describe clearly what student work that meets the standards looks like. Teachers share these expectations with students, often posting them on the classroom wall. Now when students get an assignment they know exactly what they have to do to be proficient or advanced. That’s a big change from the way assignments used to be given and graded. “If you get a 90 percent, it doesn’t tell you much about where to go from there,” says Mead.

Liddell, who lead a standards-based report card pilot project in San Francisco, said that the standard-based report card is part of an effort to close the gap in achievement among different groups of students. Because concrete skills and knowledge are listed on the report card, it is one way to help monitor whether all students are being exposed to the same curriculum and learning the skills they should learn in each grade.

The new report cards also make the standards very clear to parents, Liddell says. “Parents should know exactly what their students should be able to do.”

Al Friedenberg, former principal of Grant Elementary in Santa Monica, California, jokes that kids will get rich if they get $5 for each good grade on a standards-based report card, because students receive many more marks than on a traditional report card.

Joking aside, one of the biggest adjustments for students and parents is that many standards-based report cards focus on end-of-the-year goals. This means that in the first or second grading period, instead of getting A’s for trying hard and doing well on tests, a high-achieving student might have several marks indicating that they are not yet proficient in some skills. Although this is normal — most students will not meet all of the year’s goals in the first quarter — it can be disconcerting to parents and kids used to seeing all A’s or B’s.

Another big change for students is understanding the concept of “advanced” or “exceeding standards.” Advanced is not necessarily the equivalent of an A on a traditional report card. For example, if a fifth-grader received A’s on every math test during the semester, she would probably receive an A on a traditional report card. If those math tests measured only the concepts fifth graders are expected to master, those A’s would be the equivalent of “proficient” on a standards-based report card; the student is doing what he should be doing, but not necessarily more.

Friedenberg noted that this means teachers need to provide opportunities for students to show they can exceed what is expected and be truly advanced. Standards-based report cards can encourage teachers to make sure their lessons offer students chances to go beyond “grade level.” Mead said one analogy her district uses to explain this difference to parents is: “You climb up the hill to be proficient, but you have to fly off to be exemplary.”

Standards-based report cards provide the added benefit of keeping teachers and parents focused on student learning goals from the very beginning of the year. Friedenberg said this gives his students a chance to get help when it’s most needed, sooner rather than later.

As with the implementation of any new program, students and parents should expect some glitches and fine-tuning as the new report cards are established. Both Mead and Friedenberg noted that the first few years with their standards-based report cards were challenging for teachers as they dealt with technical difficulties at the same time that they were working to align their teaching and assessment with the new report cards. Patience and understanding from parents and students go a long way when schools are working out bugs in a new program.

Friedenberg also said the Santa Monica-Malibu Unified School District has significantly revised its standards-based report card each year. He said the first year students received 54 different marks, which proved too many for most parents to comprehend. “A lot of parents said there were so many categories that they couldn’t figure out what it meant, so they just looked at the teacher comments,” said Friedenberg. The report card was scaled down to include a smaller number of key standards.

Although states have standards for middle and high school classes, there are many challenges to using a standards-based report card at these levels. According to Liddell, one of the biggest concerns is that students need traditional grade-point averages and transcripts to be competitive in applying to college. He also noted that the large number of subjects students study in high school would make standards-based report cards unwieldy. Also, consistency in interpreting the standards between teachers and schools across a district is important to the report card’s success. In High School Report Cards, Carol Boston suggested that a report card that combines traditional grades with information about progress toward standards might be a good option at the middle and high school levels.