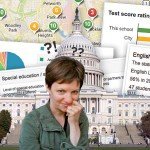 So much data — and yet so little useful information. Welcome to the conundrum facing every American parent.

A while back, my husband and I began searching for a school for our son, who was on the cusp of elementary school. I believed I was reasonably prepared: after years writing education stories for Time and the Atlantic, I was writing a book about education around the world. In the process, I’d observed dozens of classrooms in Washington, DC, where I live, and I was comfortable looking up test-score data and translating education jargon.

But I was wrong; I was not prepared. Not since planning a wedding have I encountered such an emotional marketplace, the kind that leaves otherwise reasonable adults making silly, fear-based (and sometimes exorbitantly expensive) decisions: You start out thinking you’re going to keep it under control, just a few close friends and family and a white dress; next thing you know, you’re having a meltdown in the bathroom of a catering company.

But I’m getting ahead of myself. The search started simply enough. I made a list of local public, private, and charter schools. We were fortunate to live in a city with a vast array of choices — including traditional public schools, 60 different public charter schools (more than any other city save New Orleans) and dozens of private and parochial schools. Then I plugged in what I knew: test scores, location, demographics, and reviews from other families. (No site was more helpful in this process, by the way, than GreatSchools.org, which is not paying me to write this.)

In a perfect world (one I knew probably didn’t exist), we were looking for a school that was bilingual, academically strong, and diverse. Our son was still very young, so it was hard to predict his future needs and interests, but we figured these fundamental characteristics would serve him well. The world is a big place, and we wanted to find a school that would help him hone his skills and curiosity to navigate it.

Then I made plans to visit half a dozen schools. By then I had developed a very handy cheat sheet for what to look for in a school, which made these visits much more revealing. Right away, I noticed a disconnect between test scores and what I saw in the classroom.

Is it the school — or just demographics?

DC Public Schools is unusually obsessed with data compared to systems around the world. While that data can indeed tell you what percentage of kids are performing decently on a (not very demanding) test of basic math and reading skills, it’s difficult to decipher how much value the school is adding, given the student demographics.

Take, for example, one school I visited in a leafy, upper-income neighborhood. The principal seemed to have a muddled vision for what the school was about — and classrooms operated in slow motion. The “morning meetings” dragged on and on, and many students seemed to be desperately searching for a distraction. But the kids at this school were all from such privileged homes that they were doing OK on DC’s basic tests. Most were at grade level, but many seemed bored. Parents were engaged, but the leadership seemed weak.

Like a growing number of districts, DC collects data on how much value (as measured by changes in students’ test scores over time) individual schools and teachers are adding beyond what we’d expect given the advantages or challenges students face at home. But that information was not made public in any easy-to-understand way. (GreatSchools has since begun featuring just this kind of data for Washington, DC schools.) So I was left guessing how high the test scores should have been, given a school’s demographics. This algorithm, which was entirely in my head, was less than accurate (to say the least) and only helped me identify the outliers — the schools that were performing exceptionally well or extremely poorly.

Next, to make sense of the city’s complicated system for accepting out-of-boundary students into neighborhood schools, I called DC Public Schools’ Critical Response Team, a hotline set up for parents. To my surprise, the young man who answered was extremely knowledgeable and helpful. He spent a half hour giving me strategic advice for how to navigate the system and offering a few honest insights into specific schools. (“That school has really strong parent involvement, but to be candid, I think it needs more work.”)

The most valuable information came from the conversation I had with the principal at each school. I knew I’d need to trust this leader to do an extremely hard job for years to come: selecting, supporting, and inspiring teachers I had yet to meet — and corralling parents behind a coherent vision. Asking direct questions mattered. A lot.

Sadly, these conversations were usually unsatisfying. American school leaders are beset by many conflicting demands — from parents who want their kids to play sports and never experience failure to bureaucracies and unions that severely limit what they can change. So a principal with a lucid and compelling vision was hard to find.

I thought charter schools might suffer from less mission confusion, but it was just as hard to make sense of their visions, given that there was no user-friendly, central point of information. Some charters seemed to have a great leader with clear focus and joyful schools; but those schools held lotteries because they were wildly oversubscribed. For one school, known for its rigorous academics and economically and racially diverse student body, I did the math: based on the prior year’s results, my son’s chances of getting in were about as low as my chances of winning the actual lottery.

Shiny, beautiful, and wait… What?

Finally, I toured a private K-12 school that was hard to get into and cost about $30,000 per year. I really couldn’t afford the school, but I wanted to know what my child might be missing. Indeed, the campus was beautiful (designed for parents, it seemed, as much as children). There was natural light, blonde wood, and, in the main office, muffins for visiting adults.

Beyond aesthetics, though, I was not sure what to make of the place. The head of the school dropped a lot of jargon about the curriculum and vague promises of holistic projects. Then a mother with three children at the school took us on a tour. We saw gleaming floors, framed art projects, and other shiny objects. Finally, one visiting father asked a good question:

“Every school has its weaknesses. What is this school’s weakness?”

“You know,” said our tour guide, “I’d have to say the math program is weak.”

I thought I must have misheard her. How could the math program be weak at a school that made small children take I.Q. tests before they were even accepted — and charged parents $30,000 a year?

But no one said anything.

Then she added: “Oh, and I wish the football program was stronger.”

Suddenly, the parents came to life. “Really? What do you mean? Is there not a football team? What age does it start?”

I wandered out into the parking lot, baffled. Needless to say, we did not apply to that school.

Between a rock and a rigorous education

After a somewhat rocky first year with a new public charter school (my son was placed with a novice teacher who lost control of the classroom and eventually left halfway through the year), we enrolled our son in our public neighborhood school. We didn’t get everything we wanted, but the leadership was strong and the school was diverse and alive with traditions and involved families. The day is coming when we’ll have to create a new spreadsheet in search of the next school, but I feel fortunate to at least have choices.

Of course, in Finland I wouldn’t need so much choice, since there is almost no variation in what kids know and can do from school to school — and all teachers have to be highly educated to even consider studying to become a teacher. (Getting into teacher-training college in Finland is as hard as getting into MIT in the U.S.) In South Korea, I probably would have worried even more, since parents (especially mothers) obsess over their children’s education to an often unhealthy degree — and that culture is contagious. But in either country, I would have at least known that everyone more or less agreed on the purpose of school.

That was a big difference between America and Finland, Korea, and other education superpowers I’ve visited over the past few years. In those countries, most parents have concluded that a rigorous education is critical to their kids’ life chances — more important than self-esteem or sports or iPads. Here in the U.S., we haven’t yet had that revelation, but I am hopeful we will. For now, wherever you live, if you can find a school where parents and educators share this baseline belief in a rigorous education, then you have found something more valuable to more children than the best football program imaginable.

Looking for a school in our nation’s capital? Get the lowdown on navigating the school system in Washington, DC.