State lawmakers have struggled for decades to bring equality to how school districts are funded, yet some districts receive thousands more per student than others, a California Watch analysis has found. And the data shows spending more provides no assurance of academic success.

Last year, California schools spent an average of $8,452 to educate each student, a figure that includes money from local, state, and federal sources, including one-time stimulus funds. 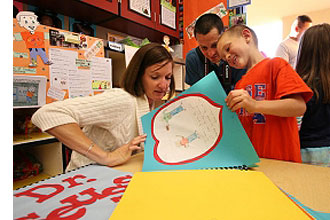 Figures are typically available only for how much districts, not individual schools, spend on their students. But according to the state’s Legislative Analyst’s Office, some of the smallest schools in the Sierra foothills, with just a handful of students, received about $200,000 per student.

Public schools consume the largest share of the state’s shrinking general fund – 42 percent of the $86 billion total. How those funds are allocated is coming under increasing scrutiny by education leaders, advocacy groups, school districts and lawmakers.

In April, Assemblywoman Julia Brownley, D-Santa Monica, chairwoman of the Assembly Education Committee, introduced legislation to reform education financing. Based on a plan proposed by Gov. Jerry Brown during his gubernatorial campaign, the bill would simplify funding formulas and direct money to students with extra needs, such as those from low-income families. “We talk a lot about the achievement gap, but there is also a parallel financial gap,” Brownley said. Unless the system is reformed, she said, “we will continue to have this disparity and this divide.”….read more