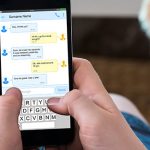 Advertisement
Parenting » Dilemmas » Should you read your child’s texts?

Should you read your child’s texts?

What about their comments and messages on social media? Better put, just how much digital privacy should your child have? We asked experts, parents and kids and here’s what they said about respecting kids’ privacy while keeping them safe.

Elissa’s* son Max* had been a sweet, smart, and curious kid. But by age 14, Elissa says, “He was consistently not making good choices that were leading to some very serious consequences.” These choices included regularly skipping school, disappearing from home for a day or more, and experimenting with drugs. During this difficult period, she says, “I looked at his phone all the time. He would get up from his room and go into the shower and I would go into his room and his phone wouldn’t be asleep yet.” The Denver-based mom of two also checked his conversations on Facebook and his phone log, having figured out all his friends’ numbers. Was he setting up a drug date? Who was he meeting up with? “My husband and I drove ourselves crazy doing this,” she says of the three years when all communication and trust had entirely broken down with her son. Now that Max is 23 and drug-free and living on his own, Elissa looks back on those tumultuous teen years and says getting her son the help he needed trumped any concerns about respecting his privacy. “If another parent asked me, ‘Should I look at my kid’s phone?’ I’d say, ‘You have to do what you have to do to save your kid’s life.”

Giving your child their first cell phone is not unlike handing them their first set of car keys. You’re entrusting them with a powerful device that requires that they make mature decisions. What’s more, as your child grows from tween to teen, their online life may be mostly hidden from you, including any conversations they’re having about risky behavior or dangerous situations.

It’s worth noting the obvious, that kids have always had conversations with their peers that adults weren’t privy to. Kids and teens were entitled to their privacy long before the invention of the cell phone; it’s hard to imagine any sane parent arguing otherwise. So why would it be any different with cell phones? Maybe because they allow teens to be in 24/7 off-the-radar communication with their peers. Or because the phone is a tiny handheld portal to potential danger in the form of cyber bullies, forums dedicated to risky behavior, and online predators. Or maybe it’s because cell phones enable spying in a way parents never could before. Some 70 percent of parents of teens with a cell phone admit they have reviewed their teen’s text messages. And in a study of more than 1,000 parents and 1,000 teens, 86 percent of parents said they would monitor their kids’ activities across devices. Just over half of those who wouldn’t said it was because they thought it was a breach of trust. Reasonable parents may wonder, where should the line be drawn between respecting their teen’s autonomy while still protecting their safety? Is it ever okay for parents to read their kids’ texts or otherwise snoop into their online life?

Should you read your child’s texts? It depends.

John Duffy, a family psychologist based in Chicago, says that when safety is an issue, absolutely. “There will be times when looking at your child’s phone is okay.” Duffy, author of Parenting the New Teen in the Age of Anxiety, says that if your child is putting themselves or others in harm’s way, and if the only way to keep them safe is to look, then by all means look. But, he adds, with this strong caveat: Establish the rules with your child in advance and make sure they know that if you’re concerned for his safety, you reserve the right to look. “The mistake we make as parents is that we aren’t clear in advance that sometimes we will look at their phones.”

And when the phone is new, he says, some supervision is a good idea. Duffy likens the first few months that a child has their phone to driving with a learner’s permit, a period when the new driver is required to have a mindful adult by their side, helping them learn to navigate potential dangers. “I never expect a kid to understand the implications and the reach of what they post [on social media],” says Duffy, who as a family therapist regularly sees kids “who have a lingering belief it works like a note in class, like nobody is going to see this and it’s temporary and not permanent.”

The sobering truth is that anything written online can be preserved and spread like wildfire. Even an ephemeral SnapChat or Wickr post might as well be written in stone the moment a savvy teen takes a screenshot of an incriminating or misguided post. In other words, the problem isn’t just about your child’s privacy. It’s that there is no privacy online. So it’s your duty as a parent, says Duffy, to educate your child and help them learn to steer clear of harm, in a way that establishes mutual trust. “You want to create situations where kids are sharing information that a parent needs,” adds Duffy. Don’t shame kids about their phone, as in, “This is my property, you have no rights,” but set up a clear agreement.

So what, exactly, is the agreement?

“The agreement doesn’t have to be laminated or notarized,” Duffy says with a laugh. It can be established in a conversation, or ongoing conversations that in essence say, “Let’s talk about how this is going to go as best I know. If I’m concerned about your health or safety, then all bets are off. I will look at your phone.”

For, say, the first six months, suggests Duffy, you might agree with your child that you have access to everything on your child’s phone. Then, as your child demonstrates that they understand how to responsibly use it, you can offer them more freedom. Just remember, Duffy says, the parent’s role is to have an ongoing conversation about responsible use. It’s not about creating that “gotcha” moment.

If you lay the groundwork early, says Duffy, “when your child has an uncomfortable or even dangerous encounter online, they will feel safe going to you. What I see too often is antagonism between the child and parent. You want your child to know, ‘You can come to me if something goes wrong. I won’t promise I won’t be mad or disappointed. But we will be fine. I am your ally.’”

Trust is a two-way street

Nancy Darling, professor of psychology at Oberlin College and author of the Psychology Today blog, “Thinking About Kids,” emphatically agrees that when it comes to kids’ cell phones and their privacy, establishing a framework of mutual trust and honesty is the best policy. “Every time you talk about trust, every time you talk about boundaries,” says Darling, “starting when they’re little, you are building on this idea that they are trustworthy.” Included in that conversation is being proactive in laying out necessary boundaries should a difficult situation arise.

“You can say, ‘This is your phone and I respect your privacy, and here are the times I may need to look,” says Darling, who includes serious depression, suicidal thoughts, stalking, suspected bullying, cutting, and involvement with a predator on the need-to-look list. Yet, adds Darling, setting up that foundation of trust and privacy with a child will pay off in the tween years and beyond. “Respecting [a child’s] privacy allows them to develop intimacy with their parents and to trust their parents,” says Darling. “When parents respect their children’s judgment and privacy boundaries, kids are more likely to ask for help when they need it. They don’t need to defend their privacy, it’s being respected. We also know that when parents invade privacy, kids increase barriers and defend their privacy by lying. Parents invade more. Kids lie more. It’s a downward spiral.”

In case of emergency, break glass

In fact, says Darling, focusing on cell phones misses the point. “It’s just a tool. Reading your child’s text messages is not that different than eavesdropping or reading their diary.” She advises parents to stay in their lane by steering clear of needless snooping, whether trying to find out what your kids are saying or who they are hanging out with.

Think of the cell phone like a fire extinguisher encased in a glass box: Break into it only in case of an emergency. To that end, Kevin Allison, a San Francisco single father of three, had his three sons write down their passwords. “We keep them in a physical envelope just in case.” Only, adds Allison with a laugh, “I can’t be sure they gave me the right passwords.”

Darling believes that by creating a mutual understanding of trust, parents can eclipse a need to snoop. “Most kids are pretty truthful most of the time,” says Darling. “And most parents do trust their kids, and most kids trust their parents around privacy and phones.”

When it comes to your child’s digital privacy, the short- and long-term goal is to encourage them to be honest with you. That’s where a low-tech tool comes in handy, the no-cost, user-friendly one known as talking with your child. “When a parent looks through a kid’s phone, it says more about the parent than the kid,” says Maddie Salafsky, a San Francisco eighth grader. “When they do that, there is a major level of trust they’ll be betraying.” It also means, she says, “that the parent probably doesn’t have a good relationship with them and doesn’t want to talk to their child about their life. Before they look at the phone, a parent should say, ‘Hey, I’m worried about you.’ That’s much better than snooping in their phone.”

* Not their real names