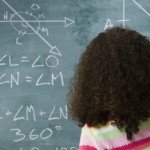 Your 6th grader and math under Common Core Standards

Math takes off this year for your sixth grader, with ratios and rates, stats, pre-algebra, and a little geometry sprinkled in.

Your child will be learning a lot about relationships this year – between numbers, that is. Sixth grade math takes on ratios and proportions, negative and positive numbers, equivalent equations, and how to depict three-dimensional shapes in two dimensions. All this and X marks the spot for pre-algebra.

Here are the 8 math skills your sixth grader should learn by the end of the year:

How much coffee do you want with your sugar?

Ratios aren’t just for bragging that one coffee shop is twice as good as all the rest. Ratios describe relationships between quantities, size, and values that can be measured and shown on a graph, table, or chart.

For example: For every inch the baby grew, she gained 1½ pounds.

Sixth graders learn to use ratios to simplify relationships.

For example: The cupcake recipe called for 1 cup of sugar for every 2 cups of flour, so it’s a 1:2 ratio of sugar to flour.

Students also work with rates, which are like a sister to ratios. If it takes 10 minutes for one car to go through the car wash, that’s a rate of 6 cars per hour. Rates are expressed with a slash, 6/1, while ratios use a colon, 6:1.

Another way of describing relationships is with percents, which are described as a portion of 100.

For example: Hank bought a gallon of milk and drank a quart of it. In this case, the gallon equals 100 percent. A quart is ¼ of a gallon, so Hank drank 25 percent of the milk.

Sixth graders work with both positive and negative numbers. They learn that 3 and -3 are opposites and that on a number line, the -3 is an equal distance to the left of 0 as 3 is to the right of 0.

The number line also shows that negative numbers have value relative to one another. For example, -2 is greater than -4. Think about a thermometer. A temperature of -2 degrees is a tiny bit warmer than a temperature of -4 degrees.

Express yourself with pre-algebra

Sixth grade is the year that students really get started on algebra. They learn how to read, write, and evaluate algebraic expressions and equations in which a letter (also called a variable) stands in for an unknown number. For example, they’ll find the value of X in the equation X – 32 = 14.

They’ll work with unknowns to solve real-life word problems with one variable.

Sixth graders learn to use various rules of math to create equations that are written differently but are equivalent.

Remember when you ran out of rectangular blocks while building your castle so you put two triangles together and hoped one wouldn’t slide apart and topple the structure? Sixth grade geometry is a bit like that.

In opposite processes known as composition and decomposition, students put shapes together and separate them to make it easier to find area and volume. They apply this to solving real-world math problems.

For example: Ray wants to plant a garden in an L-shaped plot and needs to know the area so he can buy the right amount of mulch. He uses decomposition to divide the odd shape into a rectangle and a square. Now, he can find the area of each regular shape and add them together to find the total area. (8 x 8) + (10 x 24) = 304 square feet. 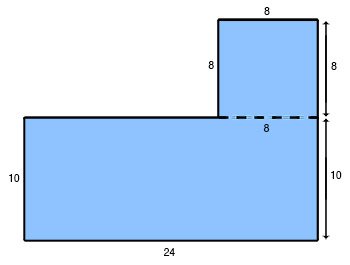 Sixth graders learn to find the volume of three-dimensional shapes with some lengths in fractions by filling them with unit cubes. They also learn to apply the formulas volume = length x width x height (V = lwh) or Volume = base x height (v=bh), depending on the object shape. 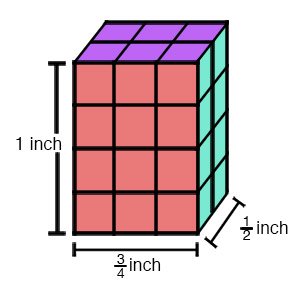 Your child will also learn to find the surface area of three-dimensional shapes by creating two-dimensional figures called “nets” that show the flattened form before it’s folded into a box or other shape.

Three out of four math teachers chew these standards

People poke fun at statistics, especially when they’re plain silly. Sixth graders learn how statistics are supposed to be collected and analyzed and that they’re based on variability. For example, asking how far one particular girl on the softball team can throw the ball is not a statistical question. But asking how far the girls on the team can throw the ball is statistical because there is variability from girl to girl.

Your child will gather data and show the results on number lines. He’ll be able to explain what was measured, how it was measured, the unit of measurement used, the median, the mean, variability, the overall pattern in the data, and significant deviations from the pattern.

Keep up with your child’s increasing math skills by thinking about the ratios, rates, and other number relationships in everyday life, such as how many times you ask her to take out the trash before she does it, or dividing that last half-cup of ice cream into fourths. Three out of five parents will be glad they did.

Hear what an award-winning middle school teacher says the number one thing sixth graders must know when they get to seventh grade.