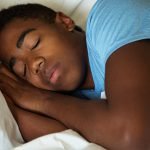 Sleep tips: get your teen some zzzzs

Sleep may be the secret weapon in helping your teen's academic achievement.

Lack of sleep is a national epidemic for today’s teens, and the consequences are serious.

In a recent University of Colorado survey, 82% of middle and high school students reported that they woke up tired and more than 50% had trouble concentrating at school at least once a week. A National Sleep Foundation survey found that only one-fifth of teenagers get the nine recommended hours of sleep each night.

Sleep deprivation can affect cognitive skills and academic achievement. A continuing lack of sleep is linked to serious health problems including diabetes, obesity, heart disease, depression and a shortened life span. Sleepy teens who drive pose a safety risk to themselves and to others — more than half of the 100,000 U.S. car accidents caused each year by sleepy drivers involve teenagers.

Studies show that teens require more sleep than children and adults but, on the whole, get less. Their natural body rhythms change as they enter adolescence and make it difficult for them to fall asleep early at night. At the same time, most high schools require students to get to school earlier and earlier. Added to this school schedule are the demands on teens to work, participate in many extracurricular activities and keep up with heavy academic schedules. And then there are the social demands — connecting with friends via cell phones and instant messaging at all hours. Is it any wonder that the majority of teens are sleep deprived? What’s the solution?

Mary Sheedy Kurcinka, teacher, parent educator and author of Sleepless in America, says parents can play a key role by placing a high value on their children’s sleep. She says the first step for parents is to “make sleep a priority.”

“The scientific research that links heart disease, type 2 diabetes and obesity with lack of sleep means that sleep is not a luxury,” she says. “This is about health and well being.”

Kurcinka says parents need to set limits on extracurricular activities and teen computer time, and become advocates at their school for reducing the amount of homework, and encouraging schools to start later.

Kurcinka argues that lack of sleep among teens is more common now than ever before and attributes this trend to three factors: science, safety and achievement.

“Science — The research on early brain development and the importance of brain stimulation has meant kids are overstimulated starting at a young age. They begin by watching ‘Baby Einstein’ videos and continue from there. Safety — parents are afraid to let kids go out and play so they provide more structured activities which tend to be organized around adult hours and schedules. Achievement — so much is competitive and overly achievement oriented for kids, from soccer to gymnastics to academics.”

To counter these factors, Kurcinka says, parents should “create an environment that values sleep and is conducive to it. The bottom line is that parents of children who are successful have a secret weapon — they protect their kids’ sleep. Kids who get more sleep have higher grade-point averages. In a study reported in the journal Child Development in 2003 entitled ‘The Effects of Sleep Restriction and Extension on School-Age Children: What a Difference an Hour Makes,’ Tel Aviv University researcher Avi Sadeh found that even 41 minutes less sleep each night can affect memory and attention.”

Schools and communities to the rescue

Schools and communities can play a role, too. In 1996, the Edina Public School District in Minnesota became the first school system in the state to change school start times to accommodate the sleep needs of teens. “Academic performance is about more than class size and dollars spent per pupil,” said Superintendent Kenneth Dragseth in a statement at the time. “We do everything we can to create an optimal learning environment for our students. If adjusting school starting times improves their performance, we’re willing to make the changes necessary to do that.”

Other schools and school districts around the nation are slowly starting to follow, although it is often difficult to get agreement among parents, teachers, school officials and school bus schedulers. So far, schools or districts in 19 states have changed their start times and more than 100 school districts in an additional 17 states are currently considering making a change. Even state legislatures are weighing in. A measure was considered in Massachusetts to encourage high schools to start no earlier than 8:30 a.m. and a similar measure, the “ZZZ’s to A’s Act” was recently introduced in California, although no action was taken.

Mark Mahowald, professor of Neurology at the University of Minnesota and director of the Minnesota Regional Sleep Disorders Center, played a role in urging schools to change their start times in Minnesota. “When we started, we didn’t really think schools would change,” he says. “Our real hope was to get schools to reverse the trend of starting earlier and earlier. We were pleasantly surprised when they did decide to move the start time later. When the start times were changed, we noticed some improvement in academic performance but the major change was in student behavior — they were particularly less irritable in morning.”

“There were many obstacles to change,” he notes. “Busing schedules, after-school sports, student employment were all excuses, but none had anything to do with education.”

Kurcinka warns that changing start times is not enough. “Research shows you can’t just shift start times; you have to educate parents and teens to monitor sleep. Otherwise kids just stay up later and later, and later start times don’t do any good.”

Catching up on sleep is not a good option

Teens often think they’ll catch up on sleep they don’t get during the week on the weekend. But sleep experts at the Mayo Clinic advise against this practice as irregular sleep schedules can affect the biological clock, hurt the quality of sleep and cause greater irritability. Teens who sleep until noon on the weekend may have an even harder time getting up for school on Monday morning. It’s better, the experts say, to keep similar schedules during the week and on the weekends.

Advice for parents: be your teen’s sleep advocate

Talk to your teen about sleep. As a parent of a teen, you can be his guide. Have a conversation with him about the importance of sleep. “Educate your teen about how much sleep he needs and how it will affect his performance,” advises Kurchinka. “If he wants to do well in his soccer game, or on a test, make him aware that he will do better if he gets more sleep. The research shows that parents who coach and monitor their teens do have an influence. As a parent, you can make a difference.”

Encourage your teen to establish a sleep routine. It may not be effective to force your teen to go to bed earlier because his natural body clock makes him want to stay up later. But you can encourage him to stick to a regular sleep schedule. Teens need an average of nine hours of sleep each night. Let him get to sleep when he wants but insist on a regular wake-up time, and work with him to push back his bedtime by 10 or 15 minutes for a few nights to get to a reasonable bedtime.

Say no to late-night TV and computer use. Keep the computer and TV out of your teen’s bedroom, if possible, but at the very least make a rule to turn them off by 10 p.m.. You can encourage your teen to start getting ready for bed during the commercials and to record “must-see” late night shows and watch them at another time.

Limit caffeine. Teens may be tempted to load up on caffeine when they don’t get enough sleep. But too much caffeine can interfere with natural sleep patterns and make it harder to fall asleep at night.

The pros and cons of naps. A short nap after school (no more than 30 minutes) may be refreshing, but don’t let your teen sleep for hours during the day as this will throw off her natural sleep schedule. It may be a stretch to convince your school to provide a time for naps, but it is done in Japan. Schools there encourage “power naps” at lunchtime, when students put their heads down on their desk for 20 to 30 minutes.

Exercise plays a role in keeping a regular sleep schedule. “Exercise is very important, particularly getting outside and getting morning light,” says Kurcinka. “But exercise raises the body temperature so it is not a good idea to exercise right before going to sleep. That means it’s important to regulate organized soccer and baseball games so they are not scheduled too late into the evening.”

Be a role model. Show your teen that you make sleep a priority in your own life. Teens are more likely to follow your advice if you follow the same rules for yourself.