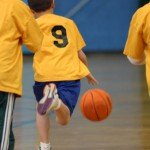 Sports: the next inclusion frontier?

You’ve probably seen the video: a boy with autism has been his high school team’s manager for years. During the last game of his senior year, they decide to let him play, and guess what? The kid hits five 3-point shots! The crowd goes wild, everyone gets a little teary at this big gesture by the team to let him play.

But a lot of other people are asking: why wasn’t he playing on the team all along?

It’s been well established that sports and physical activity are an important aspect of a child’s physical and intellectual development. The same holds true for children with disabilities. Participating in sports and recreation has the further benefit of promoting inclusion for kids in special education.

So how do PE teachers include kids with special needs, and how do parents ensure that their kids are getting the access they’re entitled to?

Matt Laughlin is an elementary school physical education teacher in Redmond, Washington. He also teaches an adaptive PE class. “Special needs are definitely a challenge,” he said, particularly when the PE teacher isn’t included in any discussions of the child’s needs.

Laughlin says that he has come up with creative ways to accommodate and modify the PE classes so they can work for all the kids. He has some younger kids with autism, for instance, who get upset if they’re tagged in a game of tag, so he gives them a job of being in charge of keeping track of who is ‘it’, so they’re part of the game and running around, but with no tagging. For kids with physical disabilities, he might use a balloon instead of a ball when playing volleyball, for instance.

He uses his adaptive PE time as a way to pre-teach the kids the skills they’ll need in the regular PE class. Several weeks before a unit on soccer, for instance, he will start to teach the kids kicking, how to throw the ball in, and will go over the rules. All of the practice makes it easier for them to blend in with their classmates when they’re playing the game.

Cheryl Richardson, Senior Program Manager at the Physical Education at National Association for Sport and Physical Education and a former physical education teacher and coach said that staffing was always an issue for her trying to include students with disabilities in PE.

“Safety and supervision can be challenging,” she said. She’s had students run out of the class, and with 25 other kids to keep track of it was hard. If the child doesn’t have an aide, Richardson sometimes pairs them up a typical student. The peer helper model also helped teach social skills, Richardson found.

Aside from the physical benefits, Laughlin sees another benefit to PE. “PE serves as a way to bring kids together,” he said. A child who may be struggling academically may be a gifted athlete. “They get this time to shine,” Laughlin said.

Laughlin and Richardson offer these tips to parents to help their kids get the most out of PE: