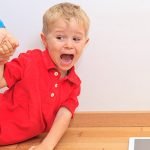 An expert explains how to manage resistance by identifying the purpose a behavior serves for a child.

Sally: Mom, can I go out and play after dinner?

Mom: I don’t want you to be too tired for school tomorrow, and, besides, you were out the last three nights in a row.

Sally (forcefully): That’s a stupid reason! Kathy, Ryan, and Monica all get to go out more than three nights in a row. You like those kids, and their parents even go to our church. So, why not?

Mom (exasperated): Because I said so!

What’s behind the resistance?

What parent can’t relate to the extremely frustrating situation described above? As a parent, you expect your child to do what you ask, in a respectful manner. Why does your child challenge your authority? There is no mystery as to why children say “No” to parents’ directions. This non-compliant behavior allows them to:

All too often, parents focus solely on the form, or outward appearance, of a child’s behavior and don’t stop to think about what purpose it’s serving for the child. For example, a child may come home from school angry after being falsely accused of talking during class. She may have felt helpless in trying to convince the teacher of her innocence. So, upon walking into the house she may purposely knock a book off a shelf. When her dad politely asks her to pick up the book she replies, “No, I won’t pick up the book! You can’t make me pick up the book! No one can make me pick up the book!”

The form of the behavior — knocking a book off the shelf — is the least important aspect for the parent to address. The child could have just as easily thrown her backpack across the room, refused to do after-school chores, or yelled at her dad. So, what purpose does her behavior serve? Knocking the book to the floor is a way for the girl to feel empowered after feeling so helpless at school.

Laying the Groundwork for New Strategies

Here are some important preconditions for increasing your child’s compliance:

There are four rather unusual, but more positive, strategies for increasing compliance in, and avoiding power struggles with, your child. Although these approaches require you to re-think some ways of managing your child’s behavior, managing resistance doesn’t have to be a complicated, time-consuming, and frustrating endeavor. Children always give us clues on how to deal with them successfully. But you must be looking for these clues and know how to turn them into strategies for managing your child’s behavior. Unfortunately, the older we get, the more stuck we can become in habitual ways of looking at and responding to our child’s misbehavior. Consequently, we fail to pick up on these important clues that are a key to compliance.

The key to changing a child’s resistant behavior is changing the context — either the setting or circumstances — that surrounds her behavior. If you think about it, any behavior gets its meaning from the context in which it happens: A lifeguard’s skills have more meaning in the context of a public swimming pool than they do on a ski slope; reading has more meaning in the context of a library than it does in a game of soccer. All behavior is defined by its context. Therefore, if you can change the context surrounding your child’s behavior, you can also change the meaning, purpose, and her motivation to engage in the behavior. I’ll describe four strategies based on this idea.

Direct a child to engage in more of the behavior

The idea behind this approach is that everyone has a tolerance level for how much of a behavior they want to perform. When we make a child’s tolerance level intolerable, she will change the behavior on her own. Recall the example of the father whose daughter wanted to be “in style” by having short fingernails. He created rapport with her, then he scheduled time for her to perform the undesirable behavior. “You have a lot of catching up to do,” he told her. “Every day when you come home from school, why don’t you grab the kitchen timer, go in your room, set it for 15 minutes, and practice biting your nails.” The father was not angry, nor did he deliver the standard lecture about the drawbacks of nail biting. Instead, he expressed pleasure that his daughter had a chance to “catch up” and “be in style” with her classmates.

His daughter followed his direction to the letter because (1) it was what she wanted to do and (2) the direction was not presented as punishment. Over several days, his daughter spent less and less time until one day she said to her father, “Daddy, I think I’m going to start a new style at school — long nails.” The behavior was no longer any fun to perform.

This approach often can be used along with changing the amount of the behavior. An example of this combination approach would be setting up a whining chair. Whining is one of those behaviors that drives parents crazy. The more we point out to a child she is whining and ask her to stop, the more she whines. How many times have you told a child not to whine, only to have the child retort in an even more whiney voice, “I’m not whiiiiiiiiiiining!”

As in the previous approach, you enthusiastically and sincerely tell the child that there is a new place for whining called the whining chair, where she can get even better at whining. You express your confidence that her whining can improve, but that you’re not sure how long it will take. As a result, whining is no longer fun, and the child is more likely to give it up — exactly what we want.

Schedule the time for the problem behavior to occur

A common problem for parents is siblings who argue, tease, or otherwise irritate each other. This problem can be remedied by setting aside a certain time for siblings to argue. You might say to your children, “You two are arguing a lot lately. I have an idea that will stop your arguing or, at the least, help you get better at it. Everyday after school, you two can sit across from each other at the kitchen table. I’ll set a timer for 30 minutes and you can both argue as much as you like.”

This approach can be modified when siblings fight in the car. Pull the car over to the curb and tell your children that you can’t drive when they are arguing because it’s not safe. Tell them you will wait outside the car while they finish fighting. Most children will stop within a couple seconds and want you to get back in the car.

But getting back in the car now won’t work — their fighting will just quickly reoccur. Therefore, let the children know that you don’t think they’ve really had enough time to finish fighting. Shortly, they will tell you they are finished. This time you tell them “Okay, but before I get back in the car, I want you both to come up with a plan to avoid fighting again.” You then wait another minute or two. The third time should be the charm!

There are other ways to modify this approach. For example, you can say to a child, “I’m going to give you a direction to do something you won’t want to do. So, I want you to whine and throw a tantrum now to get it over with before I give you the direction.” This approach works for children who constantly ask “why?” when told they can’t do something. There is no logical reason you can give for saying “no” that the child will accept. Her goal is to wear you down and make you give in. Even if you don’t give in, she at least gets some gain from seeing you upset.

So, when a child says “why?” you can answer by saying “Do you really want to know why, even though it won’t change my mind and the answer I’m going to give you is really stupid?” The last part of this question is designed to beat the child to the punch. We know that whatever answer we give, the child is going to say, “That’s stupid.” Telling her it’s a stupid answer before she tells you lets you agree with her when she subsequently says it.

Here’s an example: “The reason you can’t go out tonight is because I’m not wearing my green pants.” “What?” the child will say, “That’s the stupidest answer I’ve ever heard.” Then you respond: “You’re right, that’s a really stupid answer, but if you give me a second, I can come up with an even stupider answer.” By this time, the child will have lost interest and walked away.

Change the appearance of the behavior

This approach works well when you’re trying to tell a child something and she refuses to look at you. Instead of getting upset, you can instruct the child to place her hands over her ears to ensure she doesn’t hear one word you say. If she follows your direction, she’s being compliant. When you get compliance in one area it’s easier to get compliance in another area. At the very least, the behavior is now under your control. If she refuses to place her hands over her ears, you may comment that perhaps she wants to hear some of what you are saying — and then you can refuse to finish.

Changing your approach to regain control

Parents can manage children’s resistance in a positive, effective fashion. But you may have to step outside your comfort zone and get creative in your responses to your child’s misbehavior. Here’s a final example: A mother and her daughter are at a mall when the daughter pitches a huge fit — a floor-mopping tantrum with arms and legs waving madly. The mother immediately drops to the floor and starts throwing a tantrum alongside her daughter. The daughter instantly stops her tantrum, stands up, and says “Mom, stop that, you’re embarrassing me!” Whether or not you have this mom’s dramatic talents, the general lesson applies: Don’t get stuck in frustrating patterns of reacting to your child’s resistance. Often you have more power than you think to change your child’s negative behavior.