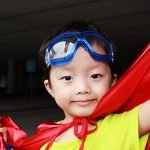 Preschoolers love tapping into their inner superhero. Here's how to keep it from promoting aggressive behavior.

At your child’s preschool, a boy emerges from his “bat cave” ready to combat evil. Sound familiar? Superhero play is an everyday occurrence in numerous preschool classrooms. But many parents wonder if the violent behavior of superheroes in television and film negatively influences a child’s social development. Experienced teachers know that superhero play is inevitable and can provide a valuable opportunity for young children to learn about helping others.

Why the interest in super-abilities?

Preschoolers learn that words and actions have meaning. Pretending to be a superhero is one way for them to feel as powerful as adults. “This type of play allows children to feel in control and invincible at a time when developmentally they might be feeling just the opposite,” says Erica Pelavin, an individual and family therapist in Palo Alto, Calif. It also involves moving their bodies in vigorous ways such as jumping, running and chasing.

Preschool-age girls also engage in superhero play, though typically with less rough-and-tumble behavior than their male classmates. Through verbal interaction with their peers, girls use fantasy scenarios to explore different roles and feelings of power. Girls engaged in superhero play may be less physical but require the same responsiveness from their teachers to reinforce positive values.

The line between fantasy and reality is momentarily blurred when a preschooler pretends to escape a villain by climbing a spider web, but he is still learning an important lesson. Young kids become familiar with the concepts of goodness and fairness and act out these themes through play. Preschool teachers and parents can help kids distinguish between powerful behavior that hurts individuals and actions that benefit others. Pelavin stresses, “Helping children to find their own positive superheroes and talking about their attributes can be a wonderful starting point. Parents and teachers can explain that true superheroes solve problems without violence. True superheroes are the people who are courageous and do things to help others.”

Pretending to be a Power Ranger or Buzz Lightyear is also an opportunity for preschoolers to try on different personalities. While they may be intimidated to share their ideas on their own, as superheroes kids may find it easier to express differing opinions. Pelavin adds, “By taking on another persona, the child can practice responding positively to fearful and anxiety-producing situations, such as teasing and bullying. Often kids disclose aspects of themselves that they might not reveal without this type of fantasy play.”

Kids engaged in superhero play use their imagination and learn to work well with others. Teachers can take advantage of this opportunity to support creative learning by setting up art materials and encouraging students to make props, costumes, and sets. Working with peers supports developing skills in cooperation, negotiation and compromise. The job for preschool teachers is to make sure this play is productive and fun for everyone and has strict boundaries so that all participants feel safe.

Superhero play that gets out of hand can promote aggressive behavior. Does it glorify violence and the use of weapons in the name of power? Could preschool children, not knowing their own physical limits, hurt a child in the process of this kind of play?

“Superhero play only becomes a concern when the play is physically aggressive in nature, and there is an imbalance of power between the children who are engaging in the play,” says Pelavin. Kids typically seek out playmates with similar interests and physical abilities, but a bully could assert power and control over another child. Pelavin continues, “When superhero play becomes aggressive, parents have an opening to talk about the consequences of violence. Parents can help children learn that responding with aggression not only causes physical injuries but can make children feel afraid or angry and may even cause the aggressor to lose friends. When the play turns away from problem solving and rescuing and starts to include name-calling and exclusion, it is no longer beneficial.”

• Establish rules from the start. For example, no pointing sticks or other props used as weapons directly at another person. These rules may need to be discussed several times. Listen to feedback. Kids can find creative ways to satisfy their interests while following directions and being safe.
• Be specific about what aggressive behavior is. Is it touching another person’s body? Is it using hostile language?
• Respond accordingly either by interrupting the play to stop aggressive behavior or talking about it afterward. The discussion can also address the story created, children who felt excluded and interesting twists and turns in the plot.
• Make sure there is an appropriate amount of space for safe play. Outdoor spaces work well, if possible.
• Talk to the kids about real-life heroes, both male and female, and focus on their positive characteristics — for example, helpfulness, perseverance and diligence.
• Ask a local hero, such as a firefighter or police officer, to visit the preschool classroom. Some children may be frightened or shy at first, especially if the visitor arrives in full uniform. Emphasize that this real-world superhero is also a neighbor and parent — in your community.
• Use this play as an opportunity to build problem-solving skills. When there is an issue, resist resolving it for the children. Ask for their ideas.
• Be positive. Acknowledge children’s new accomplishments and skills. Help them feel powerful.

Kids have been imitating larger-than-life characters since the days before television. With careful observation and feedback from preschool teachers and parents, superhero play can be a fun way for children to develop their own capabilities while learning about helping others.