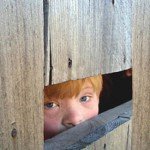 Disabilities through a child’s eyes

We tell children "Everyone's the same," but they know better. And there's no shame in being different.

I watched with a huge grin as my 2-year-old son painstakingly negotiated the three steps to get to the top of the play structure at our local playground. Aidan wobbled, hesitated, and looked back at me for reassurance. When he got to the top, he sat with a plop, lifted his arms in victory, threw back his head, and cheered.

A little boy standing nearby looked at his mother and said, “What’s wrong with that kid?”

Where I saw only joy and triumph, the boy saw something else entirely — a 2-year-old who couldn’t walk, whose tongue stuck out, who struggled to climb three small steps, and who talked funny.

When Aidan was born with Down syndrome, we entered a whole new world — one that we knew nothing about and, frankly, hadn’t given much thought to. It’s the world of difference.

In our eyes, Aidan, now age 13, is just an adorable redheaded dynamo — a funny jumble of laughter, recklessness, drama, and courage. But to strangers, especially the children he runs up to on the playground, he’s a boy who doesn’t quite fit in with their idea of “normal.”

Kids are perceptive that way. Though we have this ideal vision that, to kids, “everyone is the same,” it’s actually not true. Even very young children can pick out differences faster than many adults, and sometimes they get hyper-focused on those differences.

If I see someone with a hearing aid, it doesn’t register as all that strange to me, because over the course of my lifetime I’ve seen many people with hearing aids. If a child sees someone with a strange-looking thing in their ear, it may become all he sees.

“It’s normal to notice differences,” says Nancy Miller, an assistant clinical professor at UCLA’s department of psychiatry and biobehavioral science. Our brains are wired to detect them, and we have no control over that. What we can control, and what we can help our children with, is how we respond to those differences.

Kids have one of several reactions to what they see, says Miller, who is coauthor of Everybody’s Different, which explores how people perceive and respond to those with disabilities. They may be frightened, it might worry them (“Can I catch it?”), or they may be just plain curious.

Some parents find it difficult to talk about disabilities because they’re not all that familiar with them. And a parent’s discomfort can make the situation worse. If a child sees a person using a walker and calls it out to his mother, she may say, “Don’t look” or “Don’t talk about it,” thinking it’s the polite thing to do but sending the message that using a walker is bad or shameful.

So what to do when your child spots someone different? “If your child brings it up in public, make it neutral,” says Miller. “Let them know it’s not wrong, just different.”

If you know your child will be seeing people with differences, she suggests, talk about it beforehand. For example, if you’re headed to visit your great-aunt at a nursing home, discuss what your child will see there — explain what walkers, wheelchairs, and oxygen tanks are used for.

“It’s a great teaching moment,” Miller says, and it makes children comfortable with what they encounter.

Aidan’s differences are a little subtle to young children. He has all his limbs, he walks and talks (though not clearly), and he plays just like them. When we go to the playground, I can sense as other kids become aware of Aidan. They stop what they’re doing and watch him for a minute or two. They’re scoping him out, trying to figure  out “What’s different here?”

Some of them walk up to him and ask him to play; they’re attracted to him, or they want to get a closer look. In any case, they are not afraid. Many bypass him and come straight to me: “How old is he?” is a typical first question. Usually I gently remind them that Aidan is standing right next to me and that they should ask him. The kids are often surprised (but pleased) when they ask and Aidan tells them how old he is.

Later on, if the child still is curious about Aidan, I give a brief explanation: “He has Down syndrome, which means it will take him longer to walk and talk, and sometimes it’s harder for him. But he will do these things. People are born with Down syndrome — you can’t catch it.” Usually that’s all they need to hear, and they’re perfectly satisfied.

At school, where he has been in a regular classroom since kindergarten, Aidan’s classmates have come to know him as just a boy, no longer “the boy with Down syndrome.” They look beyond his differences to see what we see: a kid who loves reading Harry Potter, telling jokes, shooting hoops, playing the guitar, and bugging his big brother.

Chances are your kid has a classmate with a disability, so now is a good time to talk about differences in people: