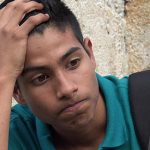 Your teen and anger

When teens get angry, here are steps parents can follow to help teens (and the whole family) feel better now — and in the long run.

In the past few years, 15-year-old Ben* has called his parents names that can’t be printed here. The 5’9” teen has shoulder-checked his 5’2” mother, slammed doors, stomped out of rooms, eye rolled and sulked and sighed, thrown objects across rooms, and hurled insults at his younger brother.

“Ever since he was a toddler, Ben’s always had big emotions,” says his mother, Nina*. “A lot of those emotions are good. The others that aren’t so good are also really big. And really difficult. He can’t seem to dial it back, he always goes from 0 to 60.” When talking with Ben doesn’t work, Nina says she and her husband have tried everything they can think of to temper their son’s temper: shutting off the Internet, taking away his electronics, grounding him for a month, and forbidding him from seeing friends and going to parties. Nina concedes that for most part, all of these have been ineffective. “He says he doesn’t care. He says, ‘You can’t hurt me.’”

Not a news flash, but teens and anger is a thing. Until you’ve lived with it, though, it’s hard to describe how trying it is to be in almost daily battle with an adult-sized child whose behavior ranges from sullen and rude to rageful and even violent.

Positive discipline experts ask parents to look at teens’ anger in an entirely different way. It starts by veering off-script from time-honored, traditional disciplinary methods and can result in a dramatic shift in how a teen feels, behaves, and relates to parents and siblings. The first step, they say, is to resist focusing on the anger itself. Instead, look beneath the anger for “cover-up emotions” that fuel the anger.

“Parents will be most effective when they put on their detective hats and try to understand the belief behind the behavior,” says Jane Nelsen, author of the Positive Discipline series. “Some act angry because they don’t know how to express, ‘I just want to belong.’ The problem occurs when parents react to the cover-up emotion, or behavior, instead of the belief behind the behavior.”

Nelsen cites famed child development expert Rudolf Dreikur: “A misbehaving child is a discouraged child.” In other words, an angry teen might be raging because they believe they are a disappointment to their parents. Or they may be anxious about school, feel left out of social cliques, resentful of their sibling, or simply overwhelmed by the internal and external changes going on in their rapidly growing brains and bodies.

Realize that teen anger happens. (Everyone gets mad.)

Positive discipline experts also urge parents to challenge the spoken and unspoken rule that “good” children don’t get mad. “Getting upset is a normal part of life,” says Dr. Nanika Coor, a Brooklyn-based clinical psychologist who specializes in working with parents. “And kids feel things intensely. Their ability to identify and manage their emotions effectively won’t be fully developed until age 25.” Until then, parents can help by teaching their child tools to understand and process their emotions.

It’s helpful to know, too, what typical teenage anger looks like. “They might ignore you, withdraw into technology, be moody, argue, have emotional outbursts, or make emotional attacks,” says Coor. “Their brain is under construction and their prefrontal cortex (the center for self-regulation, reasoning, and impulse control) is not fully developed. You can’t expect clear decision making from a 16-year-old. It’s important to remember their developmental stage: their emotional regulation is still in development.”

Let them have their emotions (no matter how difficult)

Experts say that allowing your teen the time and space to express what’s troubling them — rather than trying to squelch their emotions — helps them learn how to self-regulate as they grow.

“It’s so disrespectful to not let people, our children included, have their feelings,” says Nelsen. “Sometimes the best thing is to just be with them and let them be angry,” agrees Coor. “There’s no rationalizing when someone is yelling or throwing something. It’s just about triage at that moment.”

Encourage them to talk

Let them know you’re available to them when they’re ready for a talk or a hug (yes a hug, especially for teens). Even if you think they’re in the wrong, “Work to see the situation from their point of view and state your understanding of it,” says Coor. “When kids feel understood, they’re more likely to settle down, even if things don’t work out the way they wanted them to.” Sometimes they just need to vent, so let them, and as tempting as it is, hold off on the lecture. Even be open to apologizing if you lashed out yourself. This is all good modeling, says Coor, for how “people who love each other get angry, but come back together.”

What if they’ve been hurtful? Coor suggests saying something to the effect of: “The slamming, yelling, that didn’t work for me. I’m not feeling great about how that went down. I want to be there for you, but are there other ways you can let me know when you are angry?’ This is what it looks like to be angry with someone you love. You try to hash it out in respectful ways.”

Focus on solutions over punishments

For ages, discipline has been the go-to approach to dealing with a difficult teen. “Where did we ever get the crazy idea that in order to get children to do better, first we have to make them feel worse?” asks Positive Discipline author Nelsen. “Children do better when they feel better.” Nelsen asks parents to do a radical rethink that favors solutions over stern discipline.

Instead, try to keep lines of communication open and focus on your connection. Coor says the question is, “‘How do we want to feel when we are together?’ Not just, ‘You’re smoking weed and I don’t like it.’ How can you make it a relationship so your teen cares about your opinion? If your kid thinks you don’t care about them, then they’re not going to care about what you think. If they feel negated, then they will negate you.”

Coor promises that using these techniques of stepping back, trying to understand what’s beneath the anger, and finding common ground aren’t more time-consuming, nor are they more trouble. They are just relatively unfamiliar for most parents.

Punishment may work in the moment, (or not, for an independent teen), but Coor promises that connection pays off in the long-run by helping your teen learn how to self-regulate difficult emotions and keeping an open dialog between parents and teens.

If your teen’s anger is extreme, it’s worth seeking help from a therapist. Many children who struggle with extreme emotions suffer from ADHD or/and Oppositional Defiant Disorder. “If you have a really volatile kid,” says Coor, “I would go for help.”

Nina and her husband did that for Ben, who was diagnosed with ADHD in third grade. Since then, he’s tried medication and family and individual therapy. These have had some success, although none has been a cure-all, says Nina. What really seems to be making a difference is that she’s learning to back off, acting as more of a counselor and less of a micro-manager, and yes, practicing connection rather than stern correction.

Know that it will get better (really)

Nina says she’s seeing some subtle, but positive, changes in her son. “He’s maturing and taking on more responsibilities,” including bagging groceries at their local grocery store. “He’s becoming more of an independent person with his own life. He’ll even turn to me for advice, which never used to happen. This has given me a glimpse of what our relationship can look like. It’s giving me hope.”

*Their names have been changed to protect their privacy.