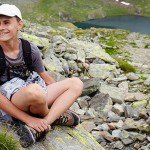 The wilderness transformed my son

What happens when a desperate mom helps her unhappy teen by sending him away? Nothing short of a small miracle.

My son, Cole, was an angry teen. I’m not sure how he got so angry or what he was angry about. But, from my point of view, he went from a sweet, intelligent boy with an unstoppable curiosity to an angry, unproductive young man overnight.

Everything I’ve read about anger and depression in teens told me that the adolescent brain is not yet mature, that teens are different animals from adults. Their brains aren’t finished. It seemed as if the only thing parents can do is keep their kids safe and wait for the crazy years to pass, as everyone who has survived it assured me would happen.

I’ve known parents who resorted to military camps and teens who turned to self-medication through drugs and alcohol to get through these years. I didn’t want any of that for Cole. But I did find myself wishing for a windfall that would allow me to send him to boarding school so he could go through them without destroying our relationship. He was difficult to have in the house.

He is man-sized at 6’1″, and his moods were violent and unpredictable. He was also wasting opportunities by slouching through school and applying himself to nothing – except video games and watching amusing videos on YouTube. In fact, I was starting to worry that the video games – with their combination of on-screen violence and physical inactivity – were causing these terrible moods.

Then I spoke to Dr. Robert Epstein, author of Teen 2.0 (Quill Driver Books, 2010) for an article – and read his book. (Or most of it.) Epstein’s premise is that teens are angry for good reason. They live in a culture that continues to treat them like helpless children long after they are – in mind and body – adults.

Knights, pirates, and other teens

It hasn’t always been this way. A glance at history tells tales of teenage kings, knights, pirates, and authors. Benjamin Franklin was exactly my son’s age (15) when he penned his famous letters under the pseudonym Silence Dogood, after working as a printer for over a year. Today, a boy that age is too young to work, drive, or open a bank account. When I stopped to think about how frustrating that must be for a tall, intelligent, able man in the prime of life, I felt like flying into a temper, too. Video games were simply giving Cole the feeling of accomplishment, competence, and adventure he craved – that previous generations of teens got from real roles on ships, farms, and battlefield where they were treated like – and had the same rights as – adults.

I’m not stopping my son from starting a company, skipping high school and going straight to college, or leaving the house to do whatever he likes. In fact, I’ve encouraged all these things – within the limits of the law. But, there are societal strictures everywhere he goes which send a very clear message, “You are just a child!”

I was as stunned as he was, for example, to learn that I had to go with him to open a bank account. He’s taller than I am and much better at math. Why does he need my help? “He wants to be an adult,” says Epstein. “He is ready to be an adult. But we won’t let him. Acting like a child is familiar – and permitted. So he acts like an angry child.”

As if to prove these words, Cole burned Dr. Epstein’s book in a fit of temper (which is why I never finished reading it.) “You have to stop reading all this crap about how to control me!” He screamed when I found the charred remains.

“Did you read any of it?” I asked. He hadn’t. I explained that it was about how teenagers are physically and mentally adults and we should treat them that way. He picked it out of the fireplace, smoothed it out, handed it to me, and suggested there were still some readable pages. Epstein was clearly on the right track.

In one of the chapters I did read, Epstein suggests wilderness camp as a treatment. I leapt at the idea of using nature to nurture his emotional wounds. I found a camp that was a drivable distance and signed him up. Even if it turned out to be nothing more than a bit of fun, at least Cole would be disconnected from computer games and meeting some new people.

Cole barely spoke to us on the four-hour drive to camp. When he did speak, it was to make his point clear: We were dumping him at something akin to the Siberian Gulag because we hated him and wanted to have the house to ourselves for a week. As it happened, we were looking forward to a week of peace from what increasingly seemed like a six-foot tall four year old. But we assured him that he would have fun, a week wasn’t very long, and he’d meet new people. “Maybe there will be girls?” his dad suggested. He just glared at us.

When we got there, I couldn’t understand why he wasn’t thrilled. There were definitely girls. There was also a lake with canoes, cool cabins where the teens bunked (separated by gender), a swimming pool, ropes courses, a camp store, and a stunning wilderness. We helped him carry his luggage and pick a bunk. And then we got out of there fast.

A week later, we returned.

We spotted our son standing with a group of other teens in the dappled sunlight; he appeared taller, tanned, relaxed, and – we didn’t dare believe it – happy. He smiled when he saw us and gave me a big hug. Then, after a tearful goodbye involving unnecessarily long hugs with too many girls, he shouldered his bag and we walked to the car. On the way home, we stopped for a walk. For the first time that day, he looked sad. So I asked, “Are you pining for your new friends from camp?” He nodded. Then he stopped walking and put both arms around me. “That was a really good idea, Mom. Thanks. Thanks for thinking of it. Thanks for paying for it. Thanks for everything.”

I was too stunned to speak. I think I may actually have wavered as if to faint. I didn’t want to mock him. But this was an amazing transformation. He laughed. (Something I hadn’t seen in a while.) “I know,” he said, with a knowing smile. “It’s really me. But, honestly, thanks.”

I wasn’t talking to an angry child in a man’s body. I was talking to a man – a happy man.

Why? What happened to him there? Was it the girls? The sunshine? Is there something about nature that can’t be found in our high-tech lives? Was it because he was disconnected from video games and media? Was Thoreau on to something?

Cole would tell me little more about what transpired there. I pressed him a little. But he seemed honestly not to be able to put a finger on why it was so transformative – or even aware that he’d been transformed. “It was fun,” was all he would say. So I called Dr. Epstein to see if he knew why a week at camp could produce this seemingly miraculous change.

Resilient and self-reliant vs. angry and apathetic

“A wilderness camp is not ideal, actually,” he told me. “It’s too different from the world he has to learn to function in. But – in this very narrow, artificial environment – his adult resources were tapped. He was asked to be strong and self-reliant. In short, he was called on to be an adult. And he can easily rise to that challenge.” The effects of that one-week will probably carry over – says Epstein – to his day-today life only temporarily. Once he is living in a world that’s telling him through media and via his peers that he is still a child, the anger and apathy will creep back in.

“Imagine,” says Epstein, “what he would be like if it wasn’t just wilderness camp you sent him to? What if it had been a small town run by teens? What if you gave him six months in a place that really tested his adult potential? When you went to pick him up, he would probably be a corporate executive ready to make his second million.”

Cole has been slipping back to his video and computer game addiction since his return. He has even had one or two angry fits. But, with Epstein’s voice in my head, I try not to react as if I’m dealing with a six foot, four year old when this happens. Instead of taking the computer away from him and telling him to go outside, I appeal to the man I now know is also in there.

For example, I asked him to take care of the house, pets, and his tween sister when my husband and I went out of town for two nights. He agreed without hesitation and I resisted the urge to install surveillance cameras or issue lengthy lists of instructions. (Though I did ask my mother to “drop by” to make sure they were eating and sleeping.) On the second evening, he called my husband, Dan, for advice getting his sister to stop playing computer games.

Though the temptation was intense, Dan resisted the urge to point out that we – only two days before – had the same problem with him. The two of them brainstormed strategies – most of which Cole had already tried and that had resulted in angry fits from his sister. Then Dan simply commiserated with his frustration as he would another parent and suggested, “Remind her that self-control is an adult quality,” he suggested. “And that playing video games all day is very immature.”

Finding the man inside the teen

I don’t know if this strategy will help Cole take school more seriously. But it has certainly made him someone I enjoy sharing a house with. He still plays more video games than I would like. But he’s clearly making an effort at self-control. And he has taken to announcing – very politely – that he won’t be home for dinner because he has plans to eat out with friends. He even pays for the meal himself – with money earned doing jobs around the house – and gets himself to the restaurant without asking for a ride.

Such modest improvements may not seem like a miracle, but in some small, indisputable way, they are. I’ll probably never know what it was about those few days in the mountains broke the spell of my son’s grim world view. Each expert will no doubt have a theory about what it takes to cure a case of stage 4 teenagitus. One thing I do know now is that it’s worth not giving up on our teens, even when we’re tempted to – and sometimes pushing them beyond their comfort zone is exactly what will bring a smile to their face.