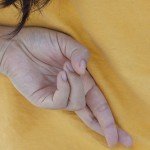 Advertisement
Parenting » Dilemmas, Emotional smarts » The best lie I’ve ever told my kids…according to the experts

We teach our kids not to lie, but is a little yuletide deception something to feel guilty about?

“What do you believe, Daddy?” My son, then six, had my husband cornered somewhere between the Christmas tree and menorah, already creating some holiday confusion.

My husband had sternly been instructed to lie. “What’s important is what you believe.”

“No!” hollered my son. “I want to know what you believe! Tell me the truth, Dad!”

Sex and Xmas: is truth better than fiction?

My young son is as fiercely devoted to truth-telling as my husband. After I told him about how babies were born in honest albeit surgical detail, he ran and told most of the kindergarten class, pissing off more than a few parents.

Hoping to head off a yuletide disaster, I jumped in. “You can’t see the wind, but you know it’s there, right? You can’t see love, but you know it’s there, right?” (Dear God, forgive me for speaking in Hallmark platitudes?) My son was caught off guard. “So just because you can’t see Santa Claus, that doesn’t mean he’s not there.” At least I had him distracted, so I continued to pile on this fat heap of illogical logic. “Anyway, how could Dad and I get the presents down the chimney? We’re not magic! And where would we get so many reindeer!?”

Dreaming of a white lie Christmas

Oh, yeah, his face seemed to say, I hadn’t thought of that. It felt like we’d shot a tranquilizing spear into our boy, who went limp and gave up the fight, at least for a couple more years. It was a relief and depressing. We’d dodged this bullet, but I have long felt ambivalent taking part in the big, white Christmas lie. Weaving this wonderland web of outlandish malarkey, in other words, deceiving our smart son – who trusted us – seemed like a line we had crossed.

Now 15, my son tells me he never held a grudge. (“I loved it, mom! It was so magical.”) And it turns out, research shows parents shouldn’t feel guilty about telling such a whopper. As reported in the Mercury News, the Santa story helps children develop a set of vital EQ (emotional intelligence) skills. According to University of Oregon’s Marjorie Taylor, author of Imaginary Companions and the Children Who Create Them, supporting a rich fantasy life helps young children learn to distinguish from reality, understand others’ expectations, and have a better understanding of emotions.

I now have a seven-year-old and we’re in the thralls of visions of the red-suited wonder breaking into our home for his reverse robbery. She’s wising up, though. Just last week, as we’re talking about getting her letter out so it reaches the North Pole in time, she said with a penetrating detective’s squint, “Tell me the truth, Mom.” Oh boy, here we go again, I thought in a panic. Do I just tell her and be done with it? Do I lie? “Do you and Dad help Santa out on Christmas night? I don’t think he can do it all by himself. Well, do you?”