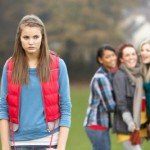 Advertisement
Parenting » Emotional smarts » The bully and the bystander

The bully and the bystander

Experts say that empowering bystanders to take action might be the key to stopping bullies.

An eighth-grader approaches a sixth-grader in a crowded girls’ locker room. The older girl says to the younger, “Those are some ugly shoes you’ve got there.” Then, in front of everyone, she takes out a permanent marker and slashes Xs on the younger girl’s shoes, ruining them. The bystanders stare and shake their heads, but do not intervene or try to discourage the bully.

Unfortunately, this passive response from bystanders is not unusual. In other words, bystanders are living up to their name by standing there and doing nothing – and this is a problem. A number of experts today say that bystanders have the power to drastically reduce bullying at schools. Their research offers tips for parents and schools on how to get bystanders to take a stand.

Bystanders are important because:

However, bystanders, especially children, need to be empowered to act. The majority of children won’t act for a variety of reasons, perhaps because they are afraid, confused or unsure of what to do.

A brief history of anti-bullying programs in schools

School programs to prevent bullying are a relatively new phenomenon. Some European countries and the United Kingdom started implementing them in the 1990s, but the United States was a little slower on the uptake. Ken Rigby, adjunct professor of education at the University of South Australia and the author of many books on bullying, says: “It has been increasingly more prevalent in the past five years or so in the United States. And bystander empowerment is certainly new.”

A new focus on the bystander

Researchers are studying the role of the bystander and discovering just how crucial it can be in creating an emotionally healthy environment. If the status quo at any school is that children observe bullying behavior in others and do nothing about it, then they end up tacitly giving their support to the bully.

Stan Davis, a bully-prevention counselor and the author of Empowering Bystanders in Bullying Prevention, says children are naturally empathetic. “But, kids don’t know what to do in all situations,” he says. “If they see someone being cruel to someone else, it’s not always easy for them to know what to do.”

What we know about bystanders

Without any education or support from adults, the vast majority of children will not take any action if they witness bullying. “The proportion of children who will spontaneously intervene is about one in five,” says Rigby. “Children on the whole feel bullying is wrong and unfair, and most want to intervene, but there are all sorts of reasons why they don’t.”

The first step in empowering bystanders to act is to help them see that their peers also feel bullying is wrong. “Once they recognize that many of their friends want them to intervene, they are more likely to,” says Rigby.

The second step is teaching them that intervening in a bullying situation can make a difference. Studies show that if a bystander discourages the bully there is a 50% chance that the bully will stop. “Most bullies bully because they want to impress people and they like an audience. So if the audience is booing instead of clapping, they realize they’re losing their audience,” says Rigby.

However, without any bullying-prevention education, as many as 25% of children will actually encourage the bully. “These kids tend to be friends with the bully,” says Kuther. “They’re also more likely to have low self-esteem. But the larger problem is that more than half of kids will do nothing if they see someone being bullied, and by doing nothing they encourage the bully.”

Empowering the bystander is really about bridging the gap between what children believe is right and what they actually do. When asked what they should do in a bullying situation, about two-thirds of children say they should intervene, but only one-third of elementary school children actually do. In high school, the percentages are even lower: only one-quarter of high school students will intervene.

Says Kuther: “Why is it that adolescents act less frequently to stop bullying? Because bullying gets so much more sophisticated and subtle in high school. It’s more relational. It becomes more difficult for teens to know when to intervene, whereas with younger kids bullying is more physical and therefore more clear cut.”

It’s important to teach children about the power of the bystander early, before they start to exhibit signs of lack of empathy. “Some children may protect themselves by becoming numb to bullying,” says Davis. “There is a natural process of moving away emotionally and disengaging.”

Compounding this problem is the fact that in early adolescence bullying tends to increase. “There is an upsurge in the desire to dominate in early secondary school,” says Rigby.

What it means to empower the bystander

Rigby suggests getting kids to talk about bullying and tell what they would do if they saw it going on. “Getting children to make these statements has an empowering effect,” he says.

In discussions among teachers, parents and kids about what to do when bullying occurs, the standard advice is to tell the bully to stop. Some adults will even go so far as to say that confronting the bully is a courageous thing to do.

But there are other approaches that may be easier – and safer – for children to use.

“We’re looking at a wide range of options besides just telling the bully to stop it,” says Davis. “For example, telling an adult is good. If they’re uncomfortable giving lots of information, they can simply say ‘Please watch the locker room at third period. There are bad things going on there at that time, but I’m not giving my name.'”

“As adults, we need to apologize to kids for the concept of tattling, which we made up and passed on to them. It’s not tattling, it’s being a witness to a crime,” says Davis.

Another option for a child who witnesses bullying is to distract the bully. Or, he can offer an escape for the target by saying something to the target like, “Mr. Smith needs to see you right now.”

Often children who are repeatedly bullied start to wonder if they deserve it or somehow bring it on themselves. A bystander can counteract these feelings by showing support to the bullied child, either during a bullying episode or afterward. A bystander can choose to sit with the child at lunch or sit by him in the classroom. “He can call the target at home to say I saw what happened and I didn’t know what to do, but I don’t think you deserved it.’ Any expression of support is good,” says Davis.

When bullying takes on a more subtle facade, as it frequently does in high school, bystanders should be encouraged to intervene by speaking up in support of a bullied classmate. “For relational aggression – name calling and gossiping – we encourage bystanders to take a stand,” says Kuther. “A big piece of this intervention is teaching kids that other kids are feeling the same way they are about the bullying.”

Physical confrontation can be dangerous

Children should not be encouraged to intervene physically in a fight or any dangerous situation. Once things escalate into physical altercations, adults should be summoned.

“Don’t have children intervene physically because you never know where it’s going to go,” says Davis. “We discourage confrontation, unless the bystander is a friend of the bully and can say something like, ‘Remember how much trouble you got in the last time you did something like this?'”

How schools can empower bystanders

Schools have to make a public commitment against bullying. “Kids need to know that the bully will be punished,” says Kuther. “Also, schools can teach anti-bullying behavior through role-playing. Schools should encourage students to be aware of sources of help.”

It’s also important that schools inform parents about the philosophy of bystander empowerment, so that parents don’t get the wrong idea. “Some parents might be alarmed, thinking that children are being encouraged to break up fights, which is not the case,” says Rigby.

Children need adults to teach them to speak up against injustice. They need to know that doing so is not tattling or snitching, but doing the right thing.

Children also need adults to help them understand that they are not alone in thinking that bullying is disturbing and wrong, and that they will be supported by their peers if they speak up.

“There is always something that any bystander can do safely. There are lots and lots of things to do. Just be flexible and keep looking for things that are going to be safe and effective for the child to do,” says Davis.

Rigby, Ken, Children and Bullying: How Parents and Educators Can Reduce Bullying at School (Blackwell Publishing, 2007)