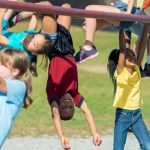 The power of play

As children slog though grueling schedules of enrichment and academics, researchers have found a connection between brain development and the very thing kids are getting less of.

Want to help kids do better in school? Don’t forget to shoo them outside to play. Whether it’s building a castle out of blocks, pretending to be a pirate, or riding bikes, play isn’t just good for the body — it actually helps the brain.

Valuable play isn’t limited to structured exercise (like organized sports), and it’s most definitely not playing video games. At its best, play engages the body and mind in imaginative activities that develop a child’s ability to think creatively, work as a team member, and create and follow rules. So if you’re worried your child needs to spend more time doing fractions/practicing violin or karate/diagramming sentences to become a complete human being, remember that kids also need unstructured time to build, create, and fantasize.

As any kid with a pile of mud (birthday cake, anyone?) already knows, play performs an essential role in childhood development. But since we’re all adults here — and it’s easy to forget what children instinctively understand — we’ve culled through the research to find the most interesting studies on different kinds of play and how they help kids grow .

Whether it’s shooting pretend enemies or playing with a dollhouse, there’s a whole lot going on when young kids use their imagination in play. Pretend play uses many parts of the brain, including those that control language, movement, emotions, and cognition. It also helps kids explore new roles and figure out how things work and how they fit into the world. Research has shown that kids who spend lots of time engaged in pretend play are better abstract thinkers and more socially and linguistically competent. And you thought your child was just playing with dolls!

Studies have also found that pretend play is the foundation for more obviously  educational activities. It’s the building block to more-sophisticated games (in which kids add rules and play cooperatively) and ultimately things like team sports and board games.

Will stacking blocks today lead to a math degree tomorrow? Well, that may be overstating it, but there’s no question that playing with blocks and other open-ended building toys (like Legos) has long-term effects on kids’ learning .

In one study, researchers focused on preschoolers who played with blocks and followed them through high school. They found that by high school the students who had used blocks had higher scores in math (on both standardized tests and class work). Another study found that playing with blocks (or other construction toys) boosts spatial and problem-solving skills in kids.

With high-stakes testing and the increasing demand that kids demonstrate academic proficiency, many schools have cut back on recess to squeeze in more class time. But research shows that children learn more and better if they’ve had a chance to play outside during the day. Studies have found that kids grew less attentive as the day went by without recess and were more alert after a break.

Recess also provides an opportunity for kids to learn cooperatively as they make up games, decide rules, and learn to resolve conflicts. The (relatively) unsupervised time with peers also boosts their communication skills — studies found that kids who are “playing” with adults tend to talk less and be much more passive.

So the next time you’re tempted to consider recess a waste of time, remember: There’s actually crucial learning going on.

With television, computers, and video games keeping kids tethered inside, many are missing out on the joys of climbing trees, building dams in streams, and collecting leaves. Playing outside gives children more than an appreciation of nature: It boosts their academic achievement and improves their behavior.

Studies have shown that being outside also pushes kids’ imaginations and lowers their stress. Their pretend play becomes more intricate and diverse than if they’re just playing indoors (and they get all those benefits pretend play affords).

Even when their mud pie days are over, kids do better outdoors. Students at schools with an outdoor component score higher in critical-thinking skills , math, reading, and behavior. Also, kids who have been deprived of the outdoors tend to not do as well in the sciences in college. One study even found that the likelihood of choosing a science career was related to the amount of time the person spent playing (not studying) in nature as a child.

Not just for little kids

As kids enter middle school, you might think play is no longer that meaningful. Think again. Although the type of play may change, its importance does not. Even for tweens and teens, unstructured play builds cognitive and social development, reading and writing abilities, and overall academic achievement.

At this age, kids may start to focus on more physical play (such as team sports) and games that involve language (such as jokes, secret codes, and word games). Playing with each other (not zoning out in front of the TV) helps them learn to take turns, wait, and follow and — perhaps more important as future adults — invent rules.

Intensely physical play has its academic benefits as well. One study found that aerobic exercise improved kids’ executive function , which helps them regulate their emotions and make good decisions. And what adolescent couldn’t use more help calming those emotional roller coasters and making healthy choices?