The push and pull of fostering teen independence

Learn how to strike a balance between being overly protective and giving your teen too much freedom.

During a recent breakfast argument over how many hours a day he spent watching TV, our son turned to me in exasperation.

Alex is right. This spring he turned 18, becoming a legal adult in the state of California. He can vote, he can sign a lease to rent an apartment, he can have his own bank account, and he can keep his medical and school records private.

But as a teen who struggles with significant learning disabilities (LD) and more than a touch of ADHD, he can also be highly impulsive, forgetful of time, obsessively stubborn, and impervious to rules and authority.

For his father and me, walking the line between being overly protective parents (who won’t let their son grow up) and giving him too much freedom (that could lead to devastating consequences) is a constant balancing act. The same old battles are there even though he is 18 — TV and computer time, curfew, being on the phone late into the night, and limits on his social life. But can we insist on the same rules when we are dealing with an 18-year-old?

The dangers of comparing your child to his peers

Is my child really ready to drive? Is he prepared to manage his own money? Housesit for a friend? Travel overseas? These rites of independence may be no big deal for the average 18-year-old, but when your child has the emotional maturity of someone three to five years younger, as studies suggest is the case for youngsters with ADHD, the answers are rarely clear cut.

The most important thing parents need to remember is that kids with ADHD and LD “tend to be less emotionally mature than their counterparts,” advises Eileen Bailey, a professional “guide” for parents who write to the informational website add.com. Bailey, whose own son deals with these issues, has counseled hundreds of parents.

“It’s really important for kids and parents to realize where they are, not where they should be,” she says. “Get rid of the notion that your friend’s kid is doing something so therefore your child should be doing the same thing, and start from where your child is.”

It is sound advice, I know from experience. Just because our son’s friends were out getting their driver’s licenses the day they turned 16 didn’t mean Alex was ready to do so. For teens with attention issues and the kind of impulsivity that leads them to act before they think, getting behind the wheel of a two-ton vehicle is a scary thought. Likewise, opening a bank account has been a challenge. The day he turned 18 Alex headed to the local bank where he’d had a joint account with me for two years to open his own checking and savings account. But a month after he opened the accounts, his balance was zero because he’d been so generous taking friends and family members out to dinner. He had thought since his ATM card still worked there was no problem. We had assumed he knew how to handle the account but hadn’t provided adequate guidance. Another lesson learned.

“All of the normal things you want a teen to learn so he can become independent obviously also apply to teens with ADD and LD, but they take extra training,” notes social worker Tonia Casselman, who holds a Ph.D. in child development and is a professor at the University of Oklahoma, in addition to running a private practice focusing on adolescents.

“While maybe another adolescent would pick up money management or good driving by watching peers or learning from a class or listening to his parents, [your] kid may not internalize the good choices about these things. It requires a parent to intervene, and this is where it gets sticky. It requires supervision and interaction right at a time when the child wants less supervision.”

Casselman suggests enlisting extended family members, teachers, neighbors, and other young adults, to assist in teaching basic skills of independence. Teens will be less resistant when the one offering advice or help is not a parent, she says. She recalls asking a plumber who came to her house to show her son what he was doing. While her son would not have let her show him anything, Casselman says, he was open to the instruction when it came from someone he saw as a professional.

Becoming truly independent is a complex process, but there are several skills and characteristics that are good indicators of a teen’s readiness. Experts suggest evaluating these indicators in your own teen before making decisions about freedoms that usually go along with turning 18:

As parents begin to answer these questions, they will be able to make decisions about how much independence is appropriate, and what skills still need to be taught, says Sheldon Horowitz, Director of Professional Services for the National Center for Learning Disabilities (NCLD).

“Every parent wants his or her child to become independent, but clearly, the underlying goal is much more complicated,” says Horowitz, who holds a Ph.D. in Education. “Being independent means getting your work done on time, caring for your personal belongings, adhering to a schedule and being on time for appointments and more. These are areas where adolescents and young adults with LD can certainly succeed with careful training and ongoing support.”

Choosing your battles: tips from the experts

In discussing the issues related to a teenager’s freedom and independence, parents need to decide which things they care most about, and focus on those. Some suggestions from teen counselors include the following:

Negotiating with the emerging young adult

Once you understand the challenges your teen faces to becoming more independent, it can be helpful to make a list of concerns. Rules about safety are non-negotiable, such as drinking and driving, drug use, and responsible dealings with the opposite sex. But issues such as when to do homework, chores, or how to carry out money management, while important, do not involve safety and can be open to negotiation.

The adage “pick your battles” is an apt one when dealing with kids, and one we have extensive experience applying at our house. When Alex insists on watching late-night TV even though he has to get up at 7:30 a.m., I find myself fighting the urge to nag and threaten. But a few mornings of going to his job as a camp counselor with just five hours of sleep is the best lesson he can have in why it’s a bad idea to stay up so late — and it’s more powerful than any amount of my nagging.

I have been less successful letting go of the idea that Alex must eat breakfast before he heads out in the morning. No amount lecturing on nutrition can convince him that he must eat. When I can’t help myself I’ll still toast some whole wheat bread and stick it under his nose, but I’ve given up saying anything if he leaves it alone. A day without breakfast won’t kill him, I tell myself. But wearing his bike helmet remains non-negotiable.

None of us wants our child to fall too hard. In fact, sometimes it’s difficult to let them falter at all. But such is the path to independence, claim those who work with teens. The normal push-pull toward self-sufficiency requires a gradual lessening of the “safety net.” It occurs more slowing for teens facing LD and ADHD issues, but it must occur, nevertheless.

“In terms of providing a safety net, I’d say stop and flip the equation,” says NCLD’s Horowitz. “Parents should not be the ones providing the net. Rather they should be providing opportunities for their children to recognize their own strengths and challenges.”

Expect the unexpected, he suggests, and you will be better equipped to deal with whatever curves the road to independence throws you and your child. “Providing guidance and encouragement while these young people create their own personal webs of support may not be easy,” says Horowitz, “but it is the only way to ensure that they will find a path to independence as responsible and self-sufficient adults.”

As a mom, I know there is nothing more gratifying than watching my child succeed at being independent, whether it is getting up on his own and making it to work on time every day for a week straight, or saving up enough money to take the family out to dinner. Alex has done both this summer, although it has been a rocky road. He still sits blurry-eyed in front of the TV long after his dad and I go to bed, even though I remind him five times that he has to get up at 7:30 a.m. for work. His new bank account was overdrawn for two days before the bank called him at home one night and he realized it wasn’t a bottomless well. Now he double checks his balance each time before he uses his ATM card.

Small accomplishments such as these may not have taken place as early as they did for his peers, but perhaps that is what makes them so satisfying when they do occur, one baby step at a time, in spite of the fact that he now wears size 11 shoes. 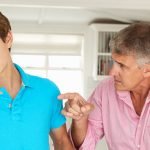