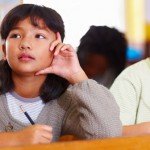 Blast through resistance and teach kids to write

A best-selling author offers five techniques to get kids excited about putting words on the page.

I strutted into the creative-writing classroom confident that my experience as a novelist and science writer had granted me wisdom to teach children to blossom as writers. When I met the students, I was even more excited. Nine-year old Jennifer couldn’t stop talking about the essay she had planned. Eight-year-old Ethan was a voluble storyteller with detailed plans for the story he had been imagining for weeks.

I marched to the front of the room and launched into my disquisition on the many manifestations of story in our lives. Within minutes, their smiles turned to yawns. What’s wrong with kids’ attention spans these days? Cutting my lecture short, I gave them what I thought was a simple assignment.

“Pick up your pens and write one page about the most awesome thing that ever happened to you.”

Grumbles, complaints, and shrugs. Is “awesome” out of fashion now? Not to worry, I had a list of age-appropriate writing prompts I had researched: “What do you think the world will be like when you are a grownup? What would you do if you had a million dollars? What did you do for your summer vacation?”

Soon I had a munchkin mutiny on my hands. “This was supposed to be fun!” “I don’t know what to write!” “It’s too hard!” “I want to go home!” They told me my inspiring subjects were “stupid” and, worse, “boring”!

These twerps sounded like my editor. How dare they? I was a bestselling man of letters! Hadn’t they read the New York Times review?

As the outcries veered toward tears, I looked at my watch. We were 10 minutes into the first class. Five hours and 50 minutes to go. Six weeks total.

Gulp. I was face to face with that awkward developmental stage that occurs just after children learn to express cogent insights, but before they learn diplomatic phrasing.

I tossed my stuffy lesson plan and confronted an audience who knew the difference between boring and inspiring, and didn’t hesitate to let me know it. By the end of six weeks of creative-writing boot camp, I would be trained by my miniature drill sergeants into a lean, mean teaching machine.

Since then I’ve tutored kids from 6 to 16, taught classroom sizes from two to 32, and been called in as emergency muse to rescue a child paralyzed with writer’s block. Through lots of trial and more error, I discovered five techniques that get kids putting pen to paper every time. Whether you’ve got 25 students or just one, use these exercises to break through inhibitions, build a story line, and turn story creation into a collaborative game instead of a solo exercise.

My first breakthrough with the kids occurred when I stumbled on this great ignition of creativity, and I’ve used it as a foolproof method ever since.

First I explained the difference between a story and a bunch of events. Story is conflict, composed of desires and obstacles, each obstacle surprising the reader and increasing the tension while challenging the strengths and flaws of the main character.

Then I explained that the whole class was going to create a story together, starting now. Before they could protest, I hit ’em with a scenario: “Story opens: A bunch of kids are sitting in front of a creative-writing teacher wondering if class is going to be boring.”

Then I pointed at the most talkative smart aleck and put him on the spot: “What happens next, Nick?”

Nick offered an inciting incident involving a ninja and a banana. Fine. I pointed at the next most extroverted kid.

“How does the man character react to the next obstacle he faces, Amy?”

Amy managed to introduce a horse and a conversation about the ninja’s feelings. OK.

“We have the ninja’s motive. What’s the next obstacle, Lakeesha?”

Each student was required to create the next plot beat — the protagonist’s reaction to get around the obstacle — as well as introduce a new obstacle that surprises the reader.

By the end of the first round, sarcasm transformed into engagement with an emerging story. Kids surprised each other with their choices, forcing creativity. Soon the tykes were brainstorming, and shy kids were raising their hands, “Ooh! Ooh! Ooh!”

Round robins between a parent and child, or tutor and student, can be even more delightful because by putting the child on the same playing field as the adult, the child experiences a surge of imaginative (and sometime mischievous) power to move the plot one way or another.

So how do you get kids to write it down? Start with:

Rile them up with animals

I’m not just talking about cutesy puppy stories. Biologist E. O. Wilson calls it biophilia, or love of life. Perhaps because animals naturally engage kids’ curiosity and metaphoric thinking (“What are they thinking?” “What would I feel like if I were a mouse?” etc.), animal themes inspire every age group, from toddler to teen, from fiction to persuasive essays.

Suppose you want to teach the five-paragraph essay structure to 8-year-olds. They must produce an introductory paragraph, three supporting paragraphs, and a conclusion. Each paragraph must contain three details and a transitional sentence. How do you get them following this dry structure without boring them to tears? Offer this subject: “Which are better — cats or dogs?”

As passionate opinions emerge, start another round robin exercise, except this time create a nonfiction essay. Each child is allowed to make one point, and the next child is required to say, “But on the other hand….” and offer a contrary opinion, which motivates children to think through their knee-jerk reactions.

After getting them riled up, tell them they must stop talking and write essays to convince all the children they disagreed with. They’ll be so busy organizing their arguments, they won’t even realize they’re learning the structure of a five-paragraph essay.

Are you faced with sophisticated 13-year olds who are too cool to get passionate? Read this paragraph aloud to them:

“Is animal testing ethical? Many of our medicines require testing on animal, which may cause animals to suffer. Which animals should be spared? Cute ones? Pigs aren’t cute but intelligent like dogs. Smart ones? Bunnies are dumb but cute. The more closely related the animal is to humans, the better our predictions about how safe medicines are. So should we test on monkeys?”

Motivated to think through their assumptions about animal ethics are a good starting place to get teens to support their moral intuitions with clearly articulated arguments.

But most miraculous is the effect animal stories have on little kids. A 6-year-old who can’t acknowledge his parents’ divorce will write an affecting story about a bunny that feels abandoned but must learn to hop between Mommy’s burrow and Daddy’s burrow. Witnessing children work through their emotions with animal characters has taught me much about the deep purpose of story in building character.

Write out a character sheet

Newbie writers think we write stories like we read them, which means we start with sentence one, march through an orderly series of sentences until we reach the last sentence, and the story or argument is supposed to occur somewhere in the middle. This unplanned approach leads to rambling, getting lost, and giving up.

One of the easiest elements of a good-story blueprint for creative writing is something called a “character sheet.” Write the name of the character at the top. Then answer four questions: What does the character want? What are the obstacles? What is his strength? What is his weakness? Ask your children to answer these questions for each character before they start writing. Only after character sheets are completed for every main character do we move on to thinking about whole story.

If the children are writing persuasive essays, I ask them to create a blueprint called an “argument sheet,” where they answer four questions: What do I believe? What do people who disagree believe? What is the strength of my argument? What is the weakness of my argument? Only if they answer these four questions do I allow them to write their “essay outline,” which I will explain in a moment.

If starting a story is hard, finishing a story is even harder. Many kids who love writing are terrific beginners and terrible finishers. Writing a plot without a plan leads to getting lost, frustrated, and stuck.

When I was working at Pixar, writer and director Teddy Newton taught me the nine story points every compelling story must follow. Ask your children to complete these sentences before they start writing:

I don’t care if it’s The Cat in the Hat or The Godfather — all stories that captivate millions follow this format. Whenever one of my little writers says, “I don’t know what to write next,” I make them stop and answer the nine story points. Any writer who completes those sentences above will have a clear plan for a story with a beginning, middle, and end.

After they have written their nine total supporting details, I have them begin writing. This allows them to conclude in light of the essay they have developed. The essay outline should look like this:

I don’t ask them to write their conclusion until after they have written the essay.

A child’s naturally emerging storytelling gift gets quashed by the way we traditionally teach writing in school, which is why I say:

You may find this bit of advice hard to accept, especially as a parent anxious to support your children’s academic writing skills. But it pays to give your children the chance to experience writing without correction, no matter how bad the spelling and grammar may be.

If you doubt the truth of this, think about all the adults who are excellent grammarians and spellers but can’t write a captivating essay. Blame their school. In our day — the forgotten nineties, ancient eighties, and primordial seventies — we were taught such stringent grammar and spelling rules, many of us never learned to get in the writing “flow zone.” Fear of the red pen has paralyzed many intelligent adults who can tell a great story or explain a wonderful idea but can’t write one.

Creativity is spontaneous, holistic, miraculous. Grammar and spelling are analytical, rule-based, and reductionist. Engaging the analytical side of a child’s brain too early in the process sabotages creativity. Actual writing flow must be messy.

Your first job is not to teach your children to edit but encourage them to write. Editing, corrections, and rewriting can come later, but until your children have gotten a story or essay on the page, talking about spelling or grammar is a sure-fire way to shut down creativity.

Before I started this essay, I listed my five points, then sketched out details. Now that I have allowed my thoughts to flow out my pen, I will go back and correct my atrocious spelling and awkward phrasing. After several drafts and rigorous editing, I will create the illusion that I had a clear idea of what I was talking about before I started. That’s how professional writers write, and that’s how kids learn to write — one messy word at a time.

Do you have a middle schooler? Check out the Milestones video to see what writing in middle school looks like.