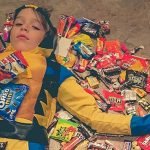 Advertisement
Parenting » Dilemmas, Health » 8 ways to trick ’em out of those treats

8 ways to trick ’em out of those treats

Don't want your kids eating all that candy? We asked parents for their best advice.

This year, Americans will spend more than $2 billion on Halloween candy. Where do most of those sweet treats go? Into the mouths of babes, or down the gullet of your middle schooler who, if he’s anything like mine, gathers pound upon pound of Snickers (the second in Halloween popularity only to – incomprehensibly – candy corn) and other scrumptious confections, brings them home and weighs them (so he’ll know if his sister or, ahem, mother eats any), and goes out again and again – enough to sustain him for the long winter months.

This, the darkest yet sweetest of holidays, may be a windfall for dentists, but Halloween is an unmitigated disaster for parents trying to protect their children from OD’ing on sugary delights. How do we keep that great Halloween spook – sugar – from haunting our homes? After consulting with seasoned parents across the country, we uncovered eight sinisterly smart ways to tackle the upcoming tsunami of sucrose. Mwahahaha!!!