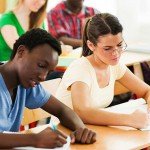 What is International Baccalaureate?

Is IB right for your child? Learn how International Baccalaureate schools, programs, and classes work for elementary, middle, and high schoolers.

Standing in front of the room, the speaker veers back and forth between two disparate works of literature: Shakespeare’s Macbeth and Ken Kesey’s 1962 novel One Flew Over the Cuckoo’s Nest. In both works, gender roles advance the plot, he says, offering an array of examples to illustrate his point. It’s a typical English class at Yonkers High School. The speaker — holding the attention of a couple dozen students — is a high school junior.

In-depth discussion controlled largely by students is what International Baccalaureate (IB) is all about. Created in Switzerland in 1968 for students in international schools, IB is now offered in 5,175 schools across 157 countries — with 1,852 public and private schools (and counting) in the U.S. IB has gained popularity for setting high standards and emphasizing creative and critical thinking. IB students are responsible for their own learning, choosing topics and devising their own projects, while teachers act more as supervisors or mentors than sources of facts. IB emphasizes research and encourages students to learn from their peers, with students actively critiquing one another’s work. Beyond preparing students for critical thinking and college-level work, the full IB program calls for students to express themselves through writing, requires community service, and aims “to develop inquiring, knowledgeable and caring young people who help to create a better and more peaceful world through intercultural understanding and respect.”

Understanding what IB schools are all about

Technically, any school with an IB program is called an “IB school.” Since “IB school” is used as shorthand, it’s important to ask how students participate in IB at any given school. It’s most straightforward at IB elementary schools, where IB is part of every class school-wide. But in middle school and high school that may not be the case. Some middle and high schools are 100 percent IB, but not all. For example, at many high schools there is an IB program that kids may opt into, much like attending a school within a school. If that’s the case, students may participate in IB at different levels, ranging from taking a single IB course to earning an IB diploma, which involves taking a full course load of IB classes and meeting a series of requirements. Given this range, it’s crucial to ask what your local school offers and allows.

The difference between IB and AP

Although widely seen as an alternative to Advanced Placement [AP] classes, IB’s different for a few reasons. For one, IB is offered at the elementary and middle school levels. AP is not. What’s more, IB can be the curricula for a handful of classes (like AP) or it can be an intensive school-wide program (unlike AP).

The AP comparison only fits in a high school with an IB diploma program where students are allowed to take one or more IB classes in their strongest subjects. Even then, IB and AP classes tend to differ in teaching method and testing. Some see AP as more focused on rote learning and standardized tests. In contrast, IB classes and assessments tend to involve more research, writing, and hands-on evaluation. A key difference is the final exam. IB exams are set up to challenge students to apply what they’ve learned in new scenarios, such as analyzing a case study, in an effort to test students’ ability to react to new information in a limited period of time. The tests (often essays) are then sent to one of 6,000 trained international examiners to be graded alongside work from other IB students worldwide.

However, AP courses may carry extra benefits that not all IB courses do. For instance, AP class grades may be weighted (check with your local school), which boosts students’ GPAs for college applications, and passing grades on AP exams can provide college credit, whereas passing grades on IB course exams may not. As a result, many students who take IB courses and exams also take the related AP test (but not the class) in order to secure college credit.

At all levels, IB takes a global approach, looking at big ideas across disciplines, such as examining connections between the early 20th century novel The Jungle and communism or considering visual depictions of music. No matter what they’re studying, students dig deep into subjects and try to find answers. In a Florida middle school, students reading The Diary of Anne Frank considered the implications of being a perpetrator, a bystander, and a witness of the Holocaust. In Yonkers, biology students develop their own experiments — a process that can leave classrooms stinky at times.

Is IB right for your child?

This depends partly on how your child learns. In an IB class, your child is less likely to take notes during teacher-led lectures and more likely to work on individual or group projects with the teacher facilitating. IB classes tend to be academically challenging, requiring students to take initiative, organize and complete projects, and speak in front of their classmates. Students who thrive in a demanding environment and like having options (like picking research topics and choosing how to present what they learn) would probably do well in IB. Others might feel overwhelmed by the intensity of the curriculum. Also, IB can be time-consuming. Children who struggle in school or have serious extracurricular commitments, such as playing a varsity sport or singing in a competitive choir, may not have the requisite time or energy for IB.

Another factor to consider is the IB curricula’s emphasis on asking questions and searching for answers — no matter how controversial the subject. Questions on every imaginable topic — from global warming to gay rights — will be up for debate as teachers challenge students to ask questions and research their answers. As topics arise, the only rules are that questioning is okay and that students seek not only answers but to understand the cultural biases that exist in competing arguments. It’s all in the pursuit of IB’s mission to teach students that, “other people, with their differences, can also be right.” To some, these class discussions may seem politically charged or they may touch on points that are at odds with a family’s belief system, so you should take this into account when considering an IB program for your child.

From preK to graduation

For children ages 3 to 12, IB focuses on six themes: who we are, where we are in place and time, how we express ourselves, how the world works, how we organize ourselves, and sharing the planet. Students examine these ideas through a variety of prisms, by considering works that focus on language, social studies, math, arts, science, and personal, social, and physical education.

The interdisciplinary approach continues in the Middle Years Program for students ages 11 to 16. Since this program doesn’t align perfectly with U.S. middle school ages, students may complete their Middle Years studies during their sophomore year of high school. Students consider IB’s five “areas of interaction” — approaches to learning, community and service, human ingenuity, environments, and health and social education — while learning the usual middle school subjects, plus technology and a foreign language. At the end, students do a personal project that usually springs from the student’s interests. At one California high school, projects have included a board game, a skateboarding video, and a self-help book for teens. At Yonkers, one student interested in forensics created a (fake) murder scene.

High schoolers participate in IB with varying degrees of intensity, depending on what the school offers. Some schools allow students to take one or two IB courses; others may require students to work toward the full IB diploma. In the two-year diploma program, students must pass IB classes in six areas: language and literature, foreign language, individuals and societies, science, math, and the arts. At Yonkers, these classes include philosophy, psychology, and social and cultural anthropology, as well as standard high school subjects such as English, Spanish, and biology.

To earn their IB diploma, seniors write a 4,000-word essay on a topic of their choice. The senior project is designed to prepare graduating seniors for college-level research and writing. Recently, seniors at Yonkers tackled such topics as the ordination of women in the Catholic Church, the U.S. debt’s impact on the country’s role as a world power, and the effect of social media on teenagers. A local adult (usually a teacher) supervises, but the final essays are sent to outside examiners who grade the work using criteria that apply to IB students around the world.

For high schoolers pursuing vocational or career and technical education (CTE), IB recently added the IB career-related programme in which students take fewer IB courses but still meet other diploma-level requirements, such as studying a foreign language, doing community service, and completing a final project related to their vocational or CTE field.

What to look for in an IB school

If you are considering an IB school, find out what form of IB it offers. If it’s a school within a school and/or students are allowed to take IB classes without pursuing an IB diploma, ask how the program works for students at different levels of participation. How will student schedules align for academics, lunchtime, and breaks, for example, and what options do students have if they have trouble acclimating to IB classes? Schools offer different classes to meet IB requirements, so find out which foreign languages, arts, and electives are available. Also, some (but not all) IB programs have GPA or testing requirements for admission, so you’ll need to determine whether your child can meet them.

Depending on how the program is financed in your district, students may need to pay for their own tests. For example, students might be asked to pay a one-time fee of $172 plus $119 for each IB high school exam they take. Pursuing an IB diploma often costs hundreds of dollars.

IB is not a magic bullet. Like any program, its success hinges on the general school atmosphere and the quality of teachers, students, and facilities, so be sure to look at the whole package.

Since IB is offered in different forms in public, private, and religious schools, you need to decide what type of school and IB program best suits your family. Then visit the school and check out the IB offerings for yourself.