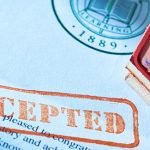 Applying for early admission means better chances of getting in, but it's important to understand what teens are getting — and maybe losing — by going this route.

It’s graduation day at Yale University. Alan Lin, the father of two daughters, is explaining — almost apologetically — how his girls were each accepted at their first-choice colleges months before most other students. “Our daughters applied to one school each. Total,” says Lin*, who asked that his real name not be used. His younger daughter is the Yale graduate; his older daughter went to Swarthmore. While other seniors spent winter break finishing applications, Lin’s daughters, who had been accepted by mid-December, were relaxing. Their peers stressed about getting a fateful “yes” or “no” in the spring, but Lin’s daughters skipped that anxiety (not to mention the work and expense of applying to other colleges), all thanks to early admission.

Lin’s daughters’ secret to minimizing college admissions stress is, in truth, not much of a secret anymore. In the competitive world of high-stakes college applications, an increasing number of high schoolers are taking advantage of early admission. Early applications are currently offered by close to 500 colleges, many of which are on the U.S. News and World Report’s list of highest-ranking colleges. For U.S. News‘ annual survey in 2015, 245 ranked colleges and universities shared their data on early admissions. The data reveals that the average acceptance rate was approximately 63.1 percent for students who applied early, while the rate for regular applicants was 50.2 percent. That’s a significant advantage for early applicants, and it can mean the difference between getting into their college of choice — or not.

Applying early: twice as likely to be accepted?

Most schools offer only one early option (rarely do schools offer both), so it’s important to know what the schools on your teen’s list offer. Early action applicants, if admitted, don’t need to let the college know if they accept until the spring, when regular decision commitments are due (typically May 1). This is an important advantage over early decision, since early action and regular admission students can evaluate all of their admission and financial aid offers and use them to negotiate financial aid packages before they accept, while students admitted early decision won’t have offers from other schools to use as leverage. Because of this potentially significant financial drawback, a major criticism of early decision is that it’s elitist, and only realistic for kids from the wealthiest families. As a result, some colleges, like Stanford and Princeton, offer restrictive early action, which is still non-binding, although applicants can’t apply early anywhere else. Of the two options, early action is the lower-stress, lower-risk route.

Early applications are typically due on November 1 or November 15 and students will usually hear back in December or January. If not accepted, a student will either be rejected or deferred, putting them into the pool of regular-decision applicants.

The lowdown on early action

Like more than half of her class at San Francisco’s Urban High School, senior Mia Carlton applied early — but not early decision, even though her college counselor hinted that choosing one school early decision would up her chances of getting into an Ivy League school. “I wasn’t sure I was ready to commit to any schools early decision,” Carlton says. “I think early action is a really, really great option.” Carlton liked that applying early helped split up the college application deadlines. “So you don’t have everything looming on January 1,” she says.

“Schools like early decision,” Arguelles says. “They like to fill their freshman class with students who have basically told them, ‘You are absolutely my favorite school.’” But it’s more than an appreciation for school spirit. Admitting students early decision increases a school’s yield, which is the number of students who are accepted and enroll. The yield is a valuable commodity — it’s used to calculate the school’s selectivity and ranking on the coveted U.S. News and World Report’s list.

When submitting an early decision application, the student, parents, and college counselor must sign an agreement stating the student will turn down any other college offers if accepted. “Be prepared to practically sign you name in blood if you apply early decision,” Goodnow says. If a student commits but then backs out, “they can’t throw you in jail,” says Arguelles, “but you’ll be blackballed. There’s an email blast: so-and-so did not live up to his or her promise.” There is, however, an exception: most schools will release students from early decision obligations without a penalty if an applicant’s financial aid package isn’t economically feasible for the family. Not being economically feasible, it’s worth noting, is not the same as not being as generous as another school’s offer, though early decision applicants would not have any other offers to compare.

Early decision, then, is designed for a particular breed of student: one who is organized enough to finish their application by the end of summer or early fall; doesn’t need another semester to bolster their GPA, courses, or extracurriculars for a stronger application; and doesn’t necessarily need to worry about financial aid. That said, a family can consult with the school in advance to gauge what they might be offered. There are three helpful, free online calculators families can use to figure out about how much aid their teen may be offered at a particular school. Money magazine’s tool) calculates the school’s estimated annual cost. The Dept. of Education’s net cost calculator helps families find out how much need-based funding your teen might get. Finally, the College Board’s family contribution calculator helps you estimate of what the financial aid office may use as your expected family contribution (EFC), a crucial number schools use to calculate how much aid to offer.

With all this data swirling, it’s easy to forget the most important qualifier for applications — early or not: being a student with stellar enough academic, extracurricular, and personal qualifications to be accepted by the school of your choice. This reality, says Arguelles, is where some students are blindsided. “Just because you signal to a college that they are your favorite school by applying early, it won’t help you if you’re not already a qualified student for that school,” Arguelles cautions.” If you’re an unqualified student applying to Yale, applying early won’t magically make you qualified.”