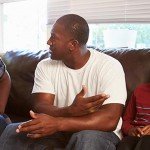 Whether you're right or wrong, call a cease-fire and find a way to build a united front for the kids’ sake.

I knew the word was K-E-E-L, as in the kind of boat Lewis and Clark used to explore the United States. My fifth grade daughter decided it was a K-N-E-E-L boat, since that was how they sat in the tiny wooden craft.

Cute, but no. Simple enough error, so I told her once she fixed that, her essay was good to go. And she gave me a simple enough reply: “No.”

I reasoned. I explained. She was (still is) stubborn. “It is kneel and I’m not changing it.”

The gauntlet was thrown. And the ensuing fight had very little to do with a child’s history essay. “You’re a crummy speller! How dare you undermine me?” I yelled, right then and there, right in front of our girl.

“Why does every little thing need to be perfect?” he grumbled back loudly. Well, loud enough for me to hear him.

I’m embarrassed to say, it escalated in a way that only a couple that is working full time, trying to put dinner on the table, get one child to dance and another picked up from soccer, book a flight for work and meet a deadline, can understand. The homework assignment went by the wayside as we fumed at each other and argued in circles. We were being beyond stupid.

But my daughter learned a very valuable lesson. Divide and conquer works in the battlefield, the halls of Congress, and yes, even in her own home.

When parents argue until they’re so angry they can’t even talk anymore, situations usually get resolved in the kid’s favor — often by sheer exhaustion. But the ramifications of this strategy are powerful, long lasting, and don’t bode well if you hope to raise a child who can function well in the world. For this, parents need to embrace a “united we stand” approach.

“If the kids are present and your spouse says, ‘Set your hair on fire,’ you ask, ‘Where are the matches?’” jokes Kathleen Cloonan, a mom of two now-adult daughters who lives in upstate New York. “You’ve got to be on the same page in front of them,” she says in all seriousness. “Later on, when they are out of earshot, you can fight all you want, but a united image is crucial.”

Get on the same page

While therapists and sociologists may suggest better ways than fighting afterward, they do embrace the united front. It doesn’t matter if your parenting style is authoritarian, authoritative, or permissive, you have to be in agreement.

Debbie Pincus, a licensed counselor in New York who specializes in parenting, agrees: “Parents need to get on the same page … but parents negotiating this cooperative spirit often feel they are in uncharted territory.”

Parenting has certainly changed over the past 50 years. The “wait until your father gets home” approach has evolved to a “wait until we both can confer” technique. But with dual working parents, crazy schedules, school demands — not to mention parental ego — this positive parenting style often seems more idealistic than realistic.

And right in the heart of it all is a child whose main focus is to get his or her way. It’s human nature. But all the anguish, sleepless nights, second-guessing ourselves, and even the actual decision itself, won’t affect our kids as much as how we work with our partner to decide how to deal with situations when we differ. And such situations are always arising. It is, after all, life.

In my house, and in many homes with young kids, the tensions and conflicts rise just before dinner, when the family is hangry — angry from hunger. With teens, the kindling is just sparking after 9 pm when parents are exhausted, yet the kids are just starting whatever crazy evening rituals they have that keep them up till well past midnight.

So naturally, that’s when kids present the failed test for a parent’s signature, insist on an answer as to whether they can go to a weekend sleepover, or seek permission to go see the trashy movie that everyone is going to. Face it, kids sniff weakness of their parents; we’re just their prey. They play one parent off another.

While major issues may bring couples together — shared values, beliefs, etc. — that may not be enough to deal with the reality that small things become big things once kids enter the picture.

Effect on kids and marriage

But it doesn’t have to be that way — at least that’s what the experts say.

After a few house-erupting sessions like the keel-kneel boat, I kept remembering Einstein’s quote that insanity is doing the same thing over and over and expecting different results. Something had to change in our home. Not only was I going crazy, but my marriage was being chipped away, and I knew this wasn’t good for our kids.

“Parents are driven by so much anxiety,” says Pincus, who has also created the Calm Parent educational series. “When parents get anxious, that’s when there are going to be problems.”

It was obvious my husband and I needed to take the energy we wasted justifying our parenting decisions to each other and instead become a team. We started with ground rules, developed one afternoon while we were not in the heat of a situation. We reinstituted the family meal — because nothing good happens with low blood sugar levels. So the whole family sat down at the table and ate together — even when we felt like stabbing each other with forks — and the issue at hand wouldn’t be addressed until after dinner. When the kids got older, a new rule evolved; no decisions would be made after 10 p.m. If they needed an immediate answer for something after that, the answer was no.

So, my hubby and I grew up. We checked our egos and presented a unified front to our children. After all, it is the child who is looking for guidance, not the adult you married. A unified front creates boundaries, expectations, and guidelines, which all children need.

For some, it seems easy. The Deegans of Kingston, New York, have raised three kids with very different personalities, but each has a reputation for doing what’s right and being compassionate. Their mother, Patty Deegan, credits that to the guidelines she and her husband, Joe, set on day one.

“We may disagree on the small things — going out on a school night, eating vegetables every day — but on the major issues (fulfilling commitments, taking school seriously, being kind to others) we present a united front.”

When disagreements happen, they stay focused on what the issue is, not who is right or wrong, Deegan says. Sometimes her decision stands, sometimes his. Their children are seeing that negotiating is part of life, and compromise doesn’t show weakness by one person, but rather respect for another.

For other families, parenting styles and a united front are ongoing challenges. Even now, with our kids away at college, we still get tested. One child or the other will call wanting something (often money) and trying (or so it seems) to wreak havoc between my husband and me, but now we shut them down. We tell them we have another call coming in and we’ll call back in a bit. Distance and time offer welcome perspectives and time to fortify our position.

One mother in the San Francisco Bay Area saw her middle school child struggling, socially more than academically. In her heart, she felt he needed more than she could give while working full time, she says. She suggested to her husband, who had a more financially lucrative job, that they sell their big house, move to something more affordable, and she’d quit her job to be there for their son. Her husband retorted, “Why do you get to quit your job?” No agreement could be reached. They never moved, and she continued working. Their son wound up hanging out with the wrong kids after school. He became addicted to drugs, ultimately ending up in rehab, and the couple divorced. She says she believes it could have gone differently if they’d had the same parenting goals.

To stand your ground or not

Deciding when to compromise and when to stand your ground are personal decisions, Pincus says. She suggests that couples learn to respect when one says this is important or says he or she feels strongly on a subject.

“You can talk about it later, but respect the decision in front of the kids,” she says. Of course, if there is any situation where the child is in danger or in harm’s way, there’s no time to negotiate. “You don’t compromise on safety.”

Likewise, if a spousal conflict becomes abusive, remove yourself and your child from the situation. Go for a walk, car ride, just get away. The same applies for verbal abuse, which can be equally destructive.

Pincus says couples should really learn about the childhood of the person they’re co-parenting with (or planning to co-parent with) to comprehend and appreciate their approach. It took my husband and I a while to appreciate the parenting differences we brought to the table based on our youths. I grew up in an Irish family of six kids. Shouting and arguing with siblings about clothes and the last slice of pizza and just about anything else were a way of life. The front door was a revolving medley of guests, friends, and neighbors. My husband was one of two, where dinner was served promptly at 6 pm and eaten in near silence. Neither style is better than the other, but each dictates what we bring to our own children.

“Co-parenting has consistently been linked to child outcomes,” says Lauren Altenburger, a doctoral student in human sciences at Ohio State University, where the New Parents Project, an effort to investigate how dual-earner couples adjust to parenthood, is being conducted. When both parents are involved, each brings traits that influence the child.

The importance of a united front remains even if the parents are divorced or not living together, Pincus says. But such arrangements, particularly joint custody, are rife for parental discord. The animosity between the couple is so strong they use the child to discredit the other parent.

One observant veteran teacher in the San Francisco Bay Area noticed a student who, on some Mondays, was out of character, acting out, inattentive, angry. It wound up the child, who was on medication, was spending selected weekends at her dad’s house — and he didn’t think she needed medication, so she didn’t take it.

“There’s no one way to raise a child,” says the teacher. “But there has to be one way in your home.”

She’s not speaking of home as a structure with a roof, but as the environment offering safety and security for a child. That one way of bringing up baby (and grade schoolers and teens) encompasses a lot of decisions that seem important at the time (soccer vs. piano lessons, dog vs. gerbil, Bagel Bites vs. grilled cheese) but ultimately are not life-shaking. Yet in those moments when parents work through their differences — big or small — they create guideposts for their children. They direct not just their behavior, but also their values, expectations, and view of the world.

9 tips for keeping peace in a volatile home

Angry daddy can’t get no respect

Get respect by embracing a different definition