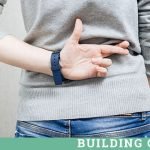 Versión en español
Advertisement
Parenting » Building character, Dilemmas » When teens lie (because they all do!)

When teens lie (because they all do!)

Teenage lying is nearly universal — and developmentally appropriate. So how can you build a trusting relationship with your adolescent child?

“Nelly, where are you going?” asks her mother one Saturday night, as her 16-year-old daughter scampers out the front door in a low-cut shirt and miniskirt.

“Shannon and I are going to a movie, I forget the name. Then we’re gonna eat at the new whatchamacallit cafe and I’ll be back by 11 or 12. Don’t wait up!”

Nelly’s mom frowns suspiciously as her daughter disappears into the night. She wonders: Was my daughter’s last-minute outfit change related to the furious spasm of texts she just got? Did she really break up with Dragomir, the too-old and too-rude wrestler? Is my daughter being honest with me?

Interrogating her, she realizes, is useless. Every time she tries, Nelly avoids her questions. Or gets angry and yells, “Mom! It makes me so mad you don’t trust me!”

It’s the paradox of parenting teenagers: their job is to develop the decision-making skills they’ll need to become responsible, autonomous adults. Our job is to give them enough freedom to practice those skills — but not so much freedom that they get themselves into serious trouble. We need to be able to trust them. But how reasonable is it to expect teens to be completely honest with their parents?

Teens are old enough to have a well-established sense of right and wrong. And they value honesty — at least in the abstract. In the Josephson Institute of Ethics 2012 survey of more than 23,000 high school students around the country, more than 95 percent of teens said they believe “lying is morally wrong.” And 86 percent agreed with the statement, “It’s not worth it to lie or cheat because it hurts your character.” Like most adults, teens find lying to be more acceptable when the motive is to be polite or do good, less acceptable when the lies cause harm or self-gain. So that’s the good news. But if you’ve ever grilled your teenager for coming home after curfew, you’ve probably wondered if they’re telling you the whole truth.

Dr. Nancy Darling, professor and chair of the psychology department at Oberlin College, has researched teens and honesty for 20 years, conducting studies in the U.S., Chile, the Philippines, Italy, and Uganda. Her conclusion is that 98 percent of teenagers worldwide lie to their parents.

Teens lie, Darling says, about how they spend their money, where they go with their friends, what they’re doing, who they’re dating, and their alcohol and drug use.
If the topics teens lie about are fairly predictable, the reasons they do it are also pretty easy to understand. According to Darling, the three reasons teens lie are, “they think they will get in trouble, they think their parents will be disappointed in them, and they think their parents will stop them from doing something they want to do in the future.”

My insightful friend Jesse offers a fourth reason teens may be reluctant to tell their parents everything: “We lie because we have this craving for autonomy and independence. By bending the truth, even in small, unimportant ways, we get to keep a morsel of information for ourselves. Every lie we tell is something our parents don’t find out about our lives. We crave that.”

My daughter Tallulah, also 16, agrees. “Kids lie,” she admits, “because they don’t want their parents to know what they’re doing or even thinking. Plus, parents always ask questions that kids don’t want to answer.”

There’s an argument to be made that this is a normal, healthy teen attitude. Dr. John Duffy, clinical psychologist and author of the best-selling The Available Parent: Radical Optimism for Raising Teens and Tweens, writes in an email, “Among the primary challenges of adolescence is making your own decisions and establishing an identity separate and apart from one’s parents…. More often than not, some degree of lying, or fibbing at the least, typically takes place here. This is a part of the ‘rebellion’ that helps establish a personal point of view.”

Perhaps more worrisome than a teen who gently rebels, Duffy suggests, is one who doesn’t. “I find that the teens that always ‘toe the line’ are a bit quashed developmentally and somewhat overly dependent on their parents, sometimes well into adulthood. As a clinician, I find myself relieved when teens push the envelope a bit, knowing that the present difficulty will likely result in a future strength.”

Darling’s knowledge of teenagers includes at-home experience: she’s the mother of two boys, including an 18-year-old. She has advice for respecting teens’ natural desire for privacy and autonomy.

“You don’t want to be intrusive,” she explains. “If you try to get into their personal business, they’ll push back, they won’t want to tell you… they might lie. They’ll throw up barriers.”

I feel guilty. I am a nosy dad.

If you want more details, Darling suggests, try asking teens casual questions when they are doing a chore like the dishes. “They might be happy to talk and talk because they are bored and it is more relaxing then.”

Darling and Duffy agree that while it’s normal for teens to want to keep some details private, that doesn’t mean you should expect your child to lie to you, nor should you ignore it if they do.

“If you think they are lying, you should raise your eyebrows and say, ‘it’s undermining my trust in you, it’s undermining our relationship.’ When they do tell you the truth, you should thank them. Don’t punish them, otherwise next time they won’t tell you. Tell them, ‘I’m really disappointed that you lied, but now I really appreciate that you told me the truth’ and then move on,” Darling says.

They also agree that an honest, trusting relationship with your teen is an attainable goal.

Teens are the most frank with their parents, Darling says, when parents utilize two semi-opposing strategies. The first is to parent with warmth and acceptance, so your teen doesn’t feel they will be harshly and unjustly punished if they tell you something you aren’t going to like.

The second is to set clear rules — and enforce them consistently. “Let them know that you regard it as your job as a parent to set rules that are good for them in the legitimate domain of parental authority — safety and school-related concerns,” says Darling. And trust them with the decisions that are appropriate for their age and maturity level.

So, make it clear you expect total honesty from your teen when it comes to activities that put their health, safety, and future at risk — including drugs, alcohol, sex, driving, ignoring homework, ditching classes, and other thrill-seeking adventures. And respect their personal business — we don’t need to know everything they’re thinking and doing or control their self-expression and social life.

But what about the big, big gray zone, the area where clashes happen and lies are told? Do behaviors like wearing clothing you consider inappropriate — getting a tattoo, spending allowance money on items you think are foolish, going to parties where there will be drinking (to name just a few) — fall under parental jurisdiction for health and safety reasons or under teens’ personal business?

Only you and your teen can answer those questions for your family. Ideally, you’d decide together. Calmly explain your position. Relate to your child why you believe that getting an eyebrow piercing or extending their curfew until 2 am is a bad idea. Explain why you view it as your business to intervene.

Darling’s research shows that rulemaking plus warmth equals teenagers who are more likely to ask for your permission and more likely to confess if they have broken a rule. “They need to respect you and believe you will be warm, accepting, and non-punitive,” she says.

The recipe for honesty turns out to be cultivating warm, strong relationships with teens so they respect your rules and value your advice. And the best way to do that, says Duffy, is to “establish a strong positive balance in the emotional bank account. This means spending a lot of quality time together, just enjoying each other’s company, listening to your kid’s music, laughing with them, asking them to show you how an app works. This lays the foundation for a trusting relationship.” Research suggests that teens lie less when they have this kind of relationship with their parents, in part because they don’t feel like they need to, and in part because they don’t want to risk losing their parents’ trust.

Wonder what happened to Nelly, the wild and evasive teenager? I checked in with her on Facebook. She’s now a 21-year-old business major at Northeastern University. She wants to be a hedge fund manager, like her father.

“Nelly,” I ask. “Give me some advice. How can parents have an honest relationship with their teens?”

“Be honest with them,” she replies. “Get as interested and involved with their life as you can. That way, you’ll know what your kids are doing, even if you don’t agree with it.”