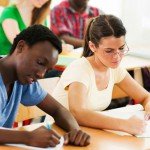 Advertisement
Parenting » Find a school skills » When “only the best” backfires

When “only the best” backfires

Why the most competitive high school may not be right for your teen.

When my brother sat down with his 13-year-old to decide which high school she would attend, they followed a simple rule: She should enroll in the best possible high school she could gain admission to.

Makes sense, right? Well, at the time I thought so too. After filling out all the applications, it seemed my niece had won the equivalent of the high school lottery. She’d been accepted into one of the most competitive, top-performing high schools in the country. On top of that, it was public and therefore free!

Most parents would agree that the best school means the best thing for their children. Yet somewhere in the translation, the concept of “best” has become synonymous with “competitive.” Competitive schools generally hold their students to high standards, which research shows has a huge impact on student achievement. But these schools can also subject students to a cutthroat atmosphere that inhibits learning.

Take my niece, for example. She’s artistic, athletic, smart, and curious. Yet there was little room for exploration at her high school since every aspect of school life — from trying out for sports teams to helping with props for the theater — involved a competition to participate in a given activity. It wasn’t that the school was filled with mean, competitive people. It was just that, like at many public schools, resources were limited, and these multi-talented, achievement-oriented kids all wanted to do everything!

When it comes to applying for colleges, parents and kids discover that choosing a school because of its competitiveness can backfire. A few years ago, Jay Mathews, an education columnist for the Washington Post, reminded readers that research shows that “the more brilliant the student body of the high school your child attends, the more likely he or she will lose out in the competition for the most prestigious colleges.” Why? Because choosy universities are trying to balance their rolls: They don’t want too many students coming from a single school.

Highly competitive high schools can make it hard for students to get into large public universities as well as Ivy Leagues — an important financial factor for many families who can’t afford out-of-state or private tuition. My niece excelled in high school but didn’t graduate at the top of her class. Because she wasn’t in the top 10%, she didn’t make the cutoff for gaining admission to one of the University of California (UC) schools. Now, the University of California has revised policies around how they weigh class ranking (top 9% required), honors classes and Advanced Placement classes in admissions; notably, they no longer consider SAT or ACT scores in admissions. Other public universities have similar top-of-the-class admissions policies: The University of Texas admits the top 10%, while Florida universities admit the top 20%.

In the end my niece gained admission to a UC school after a professor spotted her at a biology competition and actively recruited her. But I always wonder, had she gone to the second-best high school in our metropolitan area, would she have had more opportunities to learn and find mentors? Would she have been able to get into more colleges?