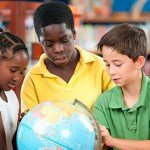 Why diversity in classrooms matters

Consider it preparation for an increasingly multicultural future — and it can be done without giving up quality.

Some of the best places to live and learn in the country have an abundance of key assets: devoted teachers, challenging curricula, and vibrant cultures of achievement. But most lack one important quality: racial diversity.

The lack of diversity reflects a disturbing development in the U.S. today: the growing resegregation of American schools. This trend began in the 1980s and accelerated in the wake of several Supreme Court decisions during the Bush administration.

The result is an education system that’s increasingly separate and unequal. Large numbers of minority children, black and Latino students in particular, are ghettoized in high-poverty schools — with alarming results. According to a 2009 report by the Civil Rights Project at UCLA: “The U.S. continues to move backward toward increasing minority segregation in highly unequal schools.”

These nonwhite schools are segregated by poverty as well as race, creating an unstable, often dangerous education experience, with high teacher turnover and scant resources. According to UCLA researchers, “These are the high schools that account for most of the nation’s ‘dropout factories,’ where a frightfully large share of the students, especially young men, fail to graduate and too many end up virtually unemployable.”

Beyond basic fairness, why should parents care about diversity? Should they count themselves lucky if their child’s school is blessed with a variety of AP offerings and a great music program, or should they be looking for more?

Ironically, while our schools are becoming more segregated, our society is becoming ever more diverse. Some 44 percent of American students today are nonwhite, and that number rises every year. To prepare kids to be global citizens, we need to expose them to more than the quadratic equation and the history of the 13 colonies. It’s essential for our kids to learn to get along with and understand people from all walks of life.

In fact, diversity in education has been shown to promote tolerance. One recent study found, for example, that college students in diverse settings exhibited less racial and ethnic prejudice than students who interacted mainly with those of similar backgrounds.

Learning empathy, flexibility, and how to work with people from different backgrounds and cultures will prepare kids to navigate an increasingly multicultural future.

Many parents who support the concept of educational equality feel forced to choose between excellence and diversity when it comes to selecting a school for their child. But there are educational pockets around the country that defy this trend by showing how diversity and quality schooling can go hand in hand.

Richard D. Kahlenberg, a senior fellow at the Century Foundation who has written widely on the subject, says that students in high-poverty schools are, on average, two years behind their peers at low poverty schools. This imbalance disappears, he says, “when low-income students have a chance to go to economically mixed schools, where their peers are academically engaged, where parents have the time and resources to be actively involved in school, and know how to hold school officials accountable, and where educators are highly effective and have high expectations for students.”

In a report, Kahlenberg identifies several turn-around magnet schools that have successfully integrated students by socioeconomic status. The result?  Increased achievement for low-income and minority students — and no drop in achievement for the student body as a whole.

Kahlenberg says more than 65 school districts around the country have implemented policies to address the issue of school poverty. And programs such as METCO in Massachusetts, which connects inner-city Boston children with high-performing schools in the city’s suburbs, are attempting to dispel some of the region’s educational inequities.

Such efforts are a step in the right direction, but most are small and affect only a small number of students. Far more needs to be done. In a world that is becoming more multiracial and multicultural every day, we’ll all benefit from an education system that doesn’t force a Faustian bargain between a good education and an ethical one.