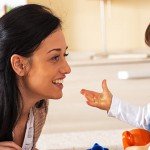 Bridge the word gap: speak 21,000 words to your preschooler daily

Some children hear about 21,000 words a day, others hear 6,000 or fewer. By age 3, that difference becomes a substantial word gap that predicts future success.

The idea of having a conversation with a toddler or preschooler may make some adults laugh. And it’s true that “conversations” with young kids are different, since adults need to do most of the talking (at least at first). But research shows that carrying on a conversation — even with babies — is essential for a child’s language development.

Research shows that young children need to hear about 21,000 words per day. The simple act of talking to kids helps them develop not just their vocabulary, but their language skills, including listening, memory, and speaking. And beyond short-term verbal skills, these early interactions increase a child’s chances of completing both high school and college. Researchers from the University of Kansas, Betty Hart and Todd Risley, found that children’s language skills at age 3 predict their language skills at age 9 or 10. And in turn, strong language and reading skills at age 9 sets your child up to perform better in high school, college, and beyond.

Unfortunately, not all children are hearing the same amount, or same quality, of words. Child psychologists Hart and Risley conducted a two-year study where they examined how parents of different socio-economic backgrounds spoke to their children. They found that by age 3, children in the poorer families heard roughly 30 million fewer words than their wealthier counterparts.

Furthermore, the wealthier parents tended to build on conversations that children started. Thus cultivating a rich variety of nouns, modifiers, and past-tense verbs. While lower-income parents tended to speak in affirmations and imperative statements such as, “I love you” or “Stop that.”

How do we bridge the word gap?

Since Hart and Risley’s study, other researchers have confirmed that the word gap exists. A recent study at Stanford found that by 18 months old, children in different socio-economic groups show dramatic differences in their vocabularies.

Local and state governments are attempting bridge the gap with grant-funded programs. The city of Providence, Rhode Island, piloted Providence Talks, a program that records what a child hears for a few hours each week and then gives low-income parents individually tailored coaching based on how they talk to their children. Children whose families participated in the Providence Talks program heard an additional 1,191 words a day, and the program has been lauded as a success. The progress was greater for children who started farther behind.

Similarly, after discovering that 70 percent of Georgia’s fourth graders were not proficient readers, the state launched the Get Georgia Reading campaign, which includes the Talk With Me Baby initiative — a campaign that promotes talking to babies as a form of “language nutrition.” And part of California’s First 5 program’s goal is to boost parents’ awareness of the importance of verbal language to a child. Talking, reading, and singing to children starting from birth stimulate a baby’s brain cells to grow and develop.

Perhaps it’s ignorant to assume that children from underserved communities will achieve success in school and escape the cycle of poverty if parents simply talk to them more and in a certain way.

Reporter Emily Badger writes in the Washington Post, “None of these programs will change the circumstances low-income parents face that contribute to the word gap. They won’t solve for the single mother who doesn’t have time to read at night because she works two jobs, or the father too preoccupied by the heating bill to play a game of peek-a-boo.”

She’s right. However, for some parents, knowing that you can boost your child’s literacy by engaging them on the walk home or with a song during bath time might be empowering and definitely worth a try.

Curious how you’ll squeeze 21,000 words into a single day — and do it every day? It’s easier than you think. Break it down, and you’ll cover about 2,000 words during 15 minutes of so-called “rich conversation” during a trip to the park. This basically means asking your child questions that require more than a yes or no answer and discussing what you’re seeing and doing.

If your little one doesn’t say much and it feels like you’re just talking to yourself, take heart: your kids are listening. Parents are encouraged to narrate their day, verbalizing things in a way that may get kids talking and definitely keeps them listening. Describe what you do and see. Still sound like a lot? Here are three strategies to get you and your child chatting more.

Closed-ended questions can be answered with a simple yes or no, so they fail to promote language development. Instead of asking your child, “Do you want water?” try asking a question that gets your child using more specific words: “What would you like to drink: water, milk, or juice?”

If your child points to something, resist the urge to give it to her because you know she wants it. Let her use her words. When your young child says, “Wah wah” and points, say, “Oh you want some water?” as you hand her the water. Then, intentionally say, “Here’s your water.” By doing so, you’re modeling using sentences for your child.

Include your little one in dinnertime table conversations, family gatherings, and family talks. Family time is great for rich conversations. Your little one can keep in touch with family members who live far away using video chat or by talking on the phone. It may not be as great as face-to-face conversation, but it’s conversation.

Soon you’ll be having conversations with your child that make sense and include more substance than “wah wah” and “big truck.”

Want more? Check out 7 ways to boost literary skills without a book in sight.