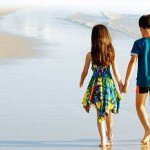 Matters of the (young) heart

Love at first sight. Crushed crushes. From preschool to puberty, here's how to help with your child’s heartthrobs and heartaches.

Aiden* insists on sitting by Sophia*, and won’t let anyone else play with her. He told her he wants to fly her to Paris. When he draws pictures of them together, he draws one person. “We are one,” he says.

“He’s obsessed,” says his teacher, Susie Siegel, a kindergarten teacher who has observed kinder crushes for the past 20 years. One recent student drew a picture of her five best friends and herself — three boys, three girls — and declared that they’re all getting married. “Even at this age, they’re very possessive,” Siegel explains — but profoundly genuine, which is why she constantly hears her kindergartners telling each other they “love” them.

Dealing with their crushes

So what’s a parent to do when their young child declares that she and Jackson are getting hitched? How serious must we be about every cupid’s arrow that grazes our child’s heart?

Some experts suggest parents not feed the flames with added drama. Julia Whitt, an experienced kindergarten teacher, sees kids develop crushes regularly. She lets her students know that it’s great that they love each other, but that there’s no dating in kindergarten. To further, and clearly, temper the passion she adds: “And we don’t kiss at school, either.”

Others suggest that parents take advantage of young love to help develop kids’ social and emotional skills. “Children do form attachments early on to people they find like-minded,” says Marissa Gehley, a retired elementary school teacher and middle school counselor. “Those early, very simple connections mimic how we form relationships later on.” So take the opportunity to help your child start to articulate deeper thoughts and feelings. Ask, “Why is Emma so special?” and “What do you like about her?”

When affections go unrequited, ask your child what they like about their crush, says Gehley, then ask what other children have those same qualities. “They begin to make connections,” she says. “It builds skills by looking for what we like, not for what we don’t like.”

Talking to your child about their friend choices early can pave the way for conversations about romantic feelings later on. Gehley recommends approaching the conversation with a certain equanimity: “You don’t want to close doors with, ‘You’re too young, don’t be silly,’ because kids take these things hard. But you don’t want to go over the top with over exuberance, ‘Tell me everything!’ either.”

Does all this change once adolescence hits? Yes and no. When hormones kick in, crushes can become all-consuming. “Few students actually have ‘relationships’ at this age, [but] most kids have crushes,” explains Sue Porter, a school counselor and sexuality educator. “Being in a relationship is generally viewed by peers as a positive and enviable thing… at the very least, it’s attention grabbing.”

Porter says that how kids display their attractions depends a lot on the school culture and on the individual child. Some kids may be happy just having someone to text with, but, she warns, “Nothing takes the place of physical contact — and that’s certainly the goal, especially for boys.”

For this reason experts stress that it’s crucial for parents to discuss feelings and appropriate behavior with their tweens. The experience for your child may have changed since their first kindergarten crush, but parents should focus on the same goal: keep lines of communication open. Still, the same conversation starters may not work. Porter cautions against bombarding your tween with a slew of questions. “This strategy works with young kids,” she says, “but parents need to adapt their parenting style as their children enter adolescence.” Back off a little, and kids are likely to come to you, she says. When they do, steer clear of, “When I was your age …” stories.

In the face of unrequited love or heartbreak, parents should remain sympathetic, but not overly emotional. Letting kids have their feelings, mirroring their sentiments, and even trying to redirect them are all strategies that can work, says Porter, as long as parents don’t deny their child’s experience or belittle them. What doesn’t work, she says, is trying to “fix” it or rationalize the problem away. Something to the tune of, “I’m sorry you’re feeling sad, honey. It sounds liked this is really hard for you,” is likely to work — though your adolescent’s reaction may be pointed, irritated, or dismissive.

Help guide your child towards the future: Who else is your child’s friend at school? Who else can your child sit next to at lunch? “You’re helping them work through the next steps,” Gehley says. “It’s a passage that we want kids to become familiar with…and try to normalize it a little bit.”

Through all the pain, aim to stay positive. “‘Well, I never liked that girl,’ or ‘It doesn’t matter, you’re only 12,’” are unhelpful sentiments, Porter says, because they don’t address the fact that your child feels awful.

Relationships in 120 characters or less

Long gone are the days when mom and dad could eavesdrop on kid’s phone calls. “Now, it’s on 58 texts,” Gehley says. And with shorter messages, context gets dropped and miscommunication proliferates. In these cases, says Gehley, it’s crucial that parents help kids identify what was said — and what’s gone unsaid. “Answers are shortened to yes, no, and happy or sad faces,” Gehley says. “So it’s more important than ever to ask [your child] questions that require a little critical thinking to answer.”

Thanks to digital tools, when things go wrong, they go wrong for the whole world to watch. “There can be complete devastation there,” Gehley says, recommending that parent help kids learn to “act a little” and put on a brave face.

Guiding your child toward positive public reactions is crucial, Gehley says. In the digital world, this means keeping Facebook posts, texts, and tweets positive. This may not be easy, especially because privacy is anathema to this generation. If your child is very angry and inclined to lash out over social media, have him write it on a piece of paper – then shred the paper. In the long run, a friendship may be salvaged, and your child’s online presence remains positive.

*Child’s name has been changed.