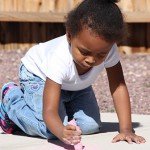 Your preschooler, writing, and the Common Core Standards

What are pre-writing skills? Learning letter sounds, listening, speaking, drawing, and scribbling their names are all big parts.

Preschoolers need to learn something we adults take for granted: what we say out loud are called words and those words can be written down using letters that represent the sounds we hear. At its most basic, writing is a code that communicates information with symbols. In English, those symbols are the alphabet, fondly called the ABCs.

Breaking down the code

The first letters most kids learn to write are the ones in their names. The goal is to write these letters carefully, spacing them so they’re not too close or too far apart, like A N Y A. This is tricky, and perfection is not the goal. Instead, keep it fun.

Magnetic letters, alphabet books, and building blocks with letters are standard props at reputable preschools and good to have at home. But nothing beats paper and crayons. Not lined paper — just wide-open, blank paper to give kids room to mark freely and prevent frustration. Adults can help kids learn to link the letters they see with the sounds they make by pointing out letters for kids to identify. You can point out short words, too, but at this age, it’s best to focus on initial sounds in words, like this: “What letter does the word beach start with? What about baby? Here’s a hint: b-b-b-baby. Let’s write a list of words that begin with that buh sound. Ready to b-b-b-begin?”

It’s a great time to practice singing the alphabet song (using Mozart’s melody, which your child may recognize from Twinkle, Twinkle, Little Star). Your preschooler doesn’t need to know all the letters yet (not officially until first grade, in fact). Better to love singing the ABCs and mix ’em up than learn to hate letters when, developmentally, your child may not be able to remember them yet.

“Stop! That’s a stop sign!” There are daily opportunities for 3- and 4-year-olds to see how useful writing can be to older people. Restaurant menus give options such as mac and cheese or chicken tenders; text messages announce when Grandma will arrive. But writing isn’t only valuable for grownups. Your child can learn to recognize his name on things and understand not just what it says, but what it means. For example, My Spiderman jacket has my name on it. Even though it looks like Alex’s, it’s not his. It’s mine.

One of the many reasons to make reading aloud a regular habit is that it helps your child understand that words on a page relate to the pictures — and those things make up the story they’re hearing. Really basic things are new to preschoolers, so it helps to point out how words on the page go from left to right. Until they really understand this young Max may proudly write his name as Amx.

Point out sensational words, like train and doll, when you see the word and the picture on a page. This helps kids associate words with objects they know — and your child may start to recognize these words every time she see them. It’s a pre-reading skill, but it’ll help as your child starts to try writing letters, such as T for train. Also, while you’re reading, ask questions to help your child practice listening carefully. For example, “What village does the Grinch live near?” or “Can you name all the animals in the Big Red Barn?”

Your preschooler’s many questions may be a little much at times, but try to encourage it because asking questions promotes kids’ verbal skills and curiosity — both of which will help your child with writing and other skills required under Common Core. See if you can help your child learn the six question words. They’ll help your little one learn to ask specific questions (a key skill for people of all ages).

Expressing a point of view promotes the thinking skills that lead to good writing. At a good preschool, teachers will ask for kids’ thoughts and feelings to promote using new words, learning logic, ethics, and expanding imagination. It’s something parents should do at home, too. Topics can be real or fantastic, such as, “Do you think you’re like the train in The Little Engine That Could?” “Do you wish there was a tyrannosaurus at the park?” “Would you like it if your brother acted like The Runaway Bunny?” And just like your 3-year-old, follow each answer with, “Why?”

Under Common Core, participating in group discussions is emphasized because it boosts thinking abilities and verbal expression. What’s that look like in preschool? Even the youngest kids start to learn how to listen, form opinions, and share what they think in age-appropriate discussions like, “How many strawberries should we put in our mouths at once?” and “Is it safe or dangerous to run up the slippery part of the slide?”

What’s new with you?

Narrative ability, crucial in writing, starts by getting kids to tell stories. Kids can make things up out of thin air or they can draw a picture and tell you the story of what they drew. Ask your child to put a title on drawing/stories, like “I SKI VERY FAST.” It’s okay for your child to dictate to you, but also great for them to write their own version even if it looks like this: I SC   FS       sS!

Encourage your child’s efforts, and get excited about any story that’s coherent, chronologically organized, includes details or descriptions, or that’s said clearly and loud enough to hear. All of these elements of a story are challenging, so give your preschooler props for trying.

Handwriting requires finger strength and agility. Fun things like sculpting with clay or play dough, finger painting, and cutting paper with scissors prepares their little digits for the challenge of writing. Tasks like using tweezers or tongs to transfer Cheerios from one bowl to another build the small motor skills and coordination needed to write. Outside, the thrilling exercise of picking up insects helps, too.

Around age 3, 4, or 5, preschoolers often stop grasping crayons and chalk in their fists and instead attempt an adult-like grip for writing. But don’t look for letters and words right away — they’ll draw scribbles, lines, circles, symbols like + and X. They’ll determine whether they’re right-handed or left-handed, and they’ll learn that writing, in English, goes from left to right. If they insist on the reverse, tell them when they’re older they can study Hebrew or Arabic.