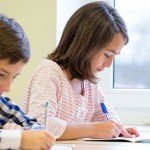 In the first year of middle school, kids are expected to write argument papers and compare literary texts.

This year, your sixth grader should learn to use precise language, the right pronouns, and high-quality sources for research. Public presentations are also a nerve-wracking highlight of the year.
We beg to disagree

Developmentally, sixth graders are entering a rebellious phase. Luckily, all this attitude has an academic outlet: argument writing. Your tween will write persuasive essays that promote their bold opinions with organized logic, backed by evidence from carefully researched, respectable sources. (Wikipedia, The Onion, and National Enquirer won’t qualify, but Wikipedia does often link to sources at the bottom of their entries that may be acceptable.)

Your 11- to-12-year-old will also write formal information essays that explain complicated topics with precise information. They’ll write intriguing introductions, and then present their research in a clear, organized way. They will use quotes, facts, definitions, compare-and-contrast statements, cause-and-effect statements, graphics (e.g., charts, graphs), subject-specific vocabulary, and multimedia. It will all be formatted (e.g., using headings, bullet points), to make their points clear. Their concluding paragraphs will recap their main points.

“To put it another way, Mommy, there is compelling evidence that I need another scoop of ice cream.” This grown-up language sounds amusingly hoity-toity in squeaky voices, but don’t laugh when your child attempts it in daily conversation. Indeed, it is good practice for their writing.

Incredibly, what happened next was..

Storytelling is exciting to sixth graders. This year, they practice narrative writing in fiction and nonfiction papers. They learn effective ways to select their narrator, characters, setting, dialogue, descriptions, and conclusion. They work to make plot sequences seem natural. To really make their stories sing, kids should use specific details, precise language, and transition vocabulary (think: After nightfall or When she awoke) that guides readers from one setting or plot point to another. Don’t be surprised if your shy bookworm starts writing a trilogy.

If at first you don’t succeed

Grit. Determination. Perseverance. Ernest Hemingway rewrote the last page of one of his novels 39 times. Rewriting and editing both teach kids discipline and determination. They are required to plan before they write, and then plan some more as their draft develops. They’re encouraged to outline before they start writing. They draft and redraft. They will revise certain parts and maybe restructure their entire paper. Then they will edit, possibly rewrite, and re-edit. At every turn, they’re encouraged to try new approaches. This isn’t obsessive redundancy; it helps students practice thinking about what they’re really, truly trying to say and then use their writing skills to convey their thoughts clearly and exactly.

Command of the keyboard

Writing nowadays often means typing. Sixth graders accelerate their hand-eye coordination as they evolve from hunt-and-peck slowness to rat-tat-tat-tat-tatting at a furious pace. The goal under Common Core Standards is for sixth graders to be able to sit and type three pages in a single sitting. Additionally, kids are taught online interaction and collaboration (e.g., emailing their work to each other, sharing Google docs, and adding suggestions and comments to each other’s work).

Sixth graders get assignments that require research. To answer questions like What famous historical character do you admire? What’s your favorite invention? What endangered species do you worry about the most?, your young detective will read thick reference books and print periodicals at the library and digital data online (yes, often via Google). Students learn to evaluate the credibility of sources. Is National Lampoon as legitimate as Encyclopedia Britannica? No. Using evidence, they compile information to write reports. They’ll learn to paraphrase what they’ve read, synthesize new thoughts, and use quotations to share information without plagiarizing.

Is Harry Potter more emotionally conflicted than Katniss Everdeen? Sixth graders sharpen their critical thinking skills by doing literary analysis. They’ll analyze poems, stories, historical novels, and nonfiction books. Kids learn to compare and contrast topics and themes. They’ll do this, for example, by discussing the consequences of prejudice in Roll of Thunder, Hear My Cry and in Harriet Tubman: Conductor on the Underground Railroad or by explaining how nature directs the plots of The Secret Garden and The Island of the Blue Dolphin. In nonfiction, sixth graders learn to divide an author’s statements into facts supported by evidence versus opinions. For example, was the Great Houdini truly “the world’s greatest magician” or is this an opinion? After all, David Copperfield walked through the Great Wall of China.

Pronouns: not just me-me-me all the time

Grammar isn’t easy, especially for 11- and 12-year-olds. Pronoun usage can be particularly tough. Kids learn about proper pronoun case. What’s that? Subjective case refers to pronouns used as subjects (I, you, he, she, it, we, they). Objective case indicates pronouns used as objects (me, you, him, her, it, us, they). Possessive case conveys ownership (my, mine, your, yours, his, her, hers, its, our, ours, their, theirs). Using pronouns incorrectly can leave the writer (or speaker) looking unintelligent. For example, Us and her carried apples over to yous big barn is neither proper nor pretty.

Mistakes in pronoun person are common among this age group. To correct this, your child needs to loyally stick with the “person” they started with. No switching from first person (I or me) to second person (you), or vice-versa: When I go to school, you should have your homework done, or When you go to school, a person should have his homework done. (Hint, that second example goes from second person to third person.) Both switches are incorrect and can create confusion.

Pronoun number is also crucial. If the subject indicates a plural quantity, the related possessive pronoun needs the identical number. Here’s an example of this common error: All of the school girls took her umbrella. (It should be their umbrellas). Vague pronouns are also a no-no. Take the sentence: Alice put a vase with a red rose on the desk, and sold it. What was sold: the vase, the rose, or the desk? We don’t know because it, used here, is too vague.

Sixth graders are expected to vary their sentences by alternating the length and structure to keep their writing interesting.

When it comes to spelling, many sixth graders know that spelling rules in English are finicky and have many exceptions. Kids learn to spell odd English words correctly, with silent letters (island, crumb) and bizarre combo consonants (cough, pheasant). As such, spelling is best learned through practice and, eventually, by memorizing. If your child gets frustrated spelling words like climb or plumbing, let them know that Theodore Roosevelt, Andrew Carnegie, and a committee of concerned citizens tried to simplify English spelling a century ago — sadly, to no avail.

Finally, as their writing becomes more advanced, sixth graders tend to use commas, parentheses, and dashes to set apart phrases and clauses. You can help by reviewing these sentences and making sure the punctuation is placed correctly.

It’s all about presentations

In sixth grade, kids will read their writing to classmates. As they read, they’ll be expected to make eye contact, pronounce their words clearly, and speak loudly enough to be heard by the entire class. They’ll share their arguments, research papers, projects, and literary efforts, which will often be accompanied by visual displays, music, audio, charts, and slides. Your child may be nervous before these presentations, but hopefully your child will be empowered by the experience.