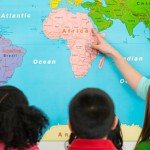 Your third grader and social studies

Students get a taste of political science as they learn the three branches of government.

Who recalls the dates of the Byzantine Empire? Or that the Ohlone Indians spoke one of the Utian languages? Details from social studies are easy to forget once we graduate to the real world. Still, such primers in history, geography, politics, and anthropology are crucial to our children’s education.

By the time children arrive in third grade, their academic focus will be changing. Instead of learning to read, students should be “reading to learn.” Schools often provide third-graders with separate social studies textbooks as social studies becomes a subject in its own right and no longer integrated into other subject areas.

But you can still expect social studies to be integrated into the school day. Third-graders might, for example, interview veterans before Veterans Day, then write about the experience. Their interviews would reflect the history, geography, government, and economics of the time the veterans served in the armed forces.

What you can expect your third-grader to do or learn:

What to look for when visiting your child’s classroom: