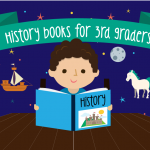 Young characters reveal the stories of different eras — from medieval times to the Civil Rights Movement — and make history real for today's kids.

Who Was Helen Keller?

Imagine being isolated in a totally dark and silent world. That’s what young Helen Keller, who was left both blind and deaf by a childhood disease, was facing. She was angry and destructive until Ann Sullivan, an extraordinary teacher who would become Helen’s lifelong friend, arrived. Miss Sullivan taught Helen to read and write using fingerspelling and Braille. This is an inspiring and heartwarming biography accompanied by bright illustrations.

Perfect for: Inspiring kids to take on even the most daunting challenge.

Find Who Was Helen Keller? at your local library.

Welcome to an adventure involving mummies, digging deep in foreign sand, and finding golden treasure. This book guides young readers into King Tutankhamen’s burial chamber with full-page illustrations that provide kids a look at the 3,3000 years between Tut’s death and the discovery of his tomb by archeologist Howard Carter. The pages are packed with details on pharaonic Egyptians, especially their elaborate funeral preparations.

Perfect for: Kids interested in ancient civilizations and archeology.

Find Tut’s Mummy: Lost … and Found at your local library.

Amelia to Zora: Twenty-six Women Who Changed the World

The author creates an alphabet book using the first names of the 26 women who have made impressive contributions to the world. The women came from different ethnic groups and countries.

Find Amelia to Zora: Twenty-six Women Who Changed the World at your local library.

The catastrophic story of the sinking of this unsinkable ship is retold chronologically from many points of view — through survivor accounts, official investigations, and modern exploration following the 1985 discovery of the wreck. On its maiden voyage in 1912, the famed steamship crashed into an iceberg and sank, drowning 1,517 people in the cold North Atlantic. Sidebars in the book introduce passengers and crew, including Captain Edward J. Smith, who went down with his ship. Historical details are bolstered by illustrations and photographs on every page.

Find Titanic at your local library.

Spacebusters: The Race To The Moon

In 1969, when Apollo 11 landed on the moon and astronauts Buzz Aldrin, Michael Collins, and Neil Armstrong successfully planted the American flag on the lunar surface, the U.S. won the international race to the moon. This launch-to-landing narrative includes spectacular photographs, vibrant illustrations, fun facts, updates on the astronauts’ lives, a chronology of later voyages, and an informative glossary.

Find Spacebusters: The Race To The Moon at your local library.

Are you a Patriot or Redcoat? Will you fight for independence for the American colonies, be a spy, or keep the colonies loyal to Britain? In this book, it’s your child’s decision.This history book drops young readers into the rebellious 1770s when many, but not all, American colonists sought independence from Britain. Readers choose where to go and what to do from three exciting story paths with responsibilities and consequences. Death is an option, macabre though it may sound. Illustrations, maps, and a time line add to the decision-making information.

Find The Revolutionary War: An Interactive History Adventure at your local library.

Chicken Creek, a small town in Mississippi, is segregated in 1964 until Annie, a 19-year-old white volunteer, arrives to teach black children at Freedom School. Annie and her pupils are terrorized, getting hate letters, having bricks come smashing through windows, and surviving a church fire. But the civil rights project bravely continues. Told through the eyes of Jolie,, a young black student, this story conveys the daily truths with the emotional depth necessary to understand the bitterness and terrifying tensions of racial conflict during Southern desegregation.

Ancient Egypt’s history and culture are amiably introduced with easy-to-read text and full-color illustrations. The book delves into topics such as the Nile River irrigation, underground tombs, hieroglyphics, the Egyptian calendar, systems of measurement, the daily life of commoners and nobility, gods and goddesses, and brief biographies of several Pharaohs. It’s a fine starter book to get your 8-year-old interested in this 5,000-year-old civilization.

Perfect for: Kids amazed by cultures long ago and far away.

Find Egypt at your local library.

Written in free verse and accompanied by realistic black-and-white sketches, this story describes the survival of a young pioneering couple on the Great Plains in the late 1800s. Their first home is a “dugout” made of local sod (e.g. prairie grass and soil connected by roots). “Matt cut them into bricks, laid them up, dug into a hill, that was our first home.” The book ends with the young woman and her husband, Matt, moving into a conventional wooden house.

Perfect for: Earthy kids who like building and creating things.

Christopher Columbus’ first voyage to the New World in 1492 is thrillingly described from the crew’s fearful, fatigued, mutinous point of view: “tired of eating salt meat. … Turn back now! … Throw him overboard!” Columbus’ gritty confidence and gold-hungry ambitions are emphasized, with interesting facts about the “Indians” they encountered. (They had cotton!) Features full-color, full-page illustrations with easy-to-read, vocabulary-building text.

Allen Jay and The Underground Railroad

Allen Jay is an 11-year-old Quaker boy living in Ohio in 1842. His family’s farm is a clandestine station on the Underground Railroad. This suspenseful, true story describes the first day Allen served as a “conductor,” hiding Henry James, a runaway slave, in the cornfield before driving him at night toward freedom in a horse-drawn buggy. Pastel illustrations bring to life a blend of tween courage, quick thinking, narrow escapes from the slave-master’s posse, Quaker beliefs, and African-American history.

Perfect for: Brave children who want to do the right thing.

Find Allen Jay and The Underground Railroad at your local library.

Adventures in the Middle Ages

Three siblings — Josh, Emma, and Libby Pinkerton — journey back in time to the Medieval Era in this funny graphic novel. Exciting adventures occur in their interactions with various social classes, like hungry, hard-working, flea-bitten peasants and drafty castle dwellers under attack from flaming arrows and flying cows. Packed with icky details and educational info on 12th and 13th century food, clothing, buildings, vocations, religions, and feudalism, this book offers a nice contrast for kids between what was then and what is now.

Perfect for: Imaginative Lancelots, Robin Hoods, and Joan of Arcs.

Find Adventures in the Middle Ages at your local library.

From pharaohs, pyramids, and mummies to hieroglyphics and the Sphinx, this book is full of beautiful, detailed images that depict the history of ancient Egypt. Though there’s very minimal text — the book’s conviction is that children this age remember information best if it’s conveyed with relevant images — the cultural contributions of the Old, Middle, and New Kingdoms of the civilization on the Nile are presented and discussed.

Perfect for: Kids who are fascinated by what life looked like “way back when.”

Sarah Edmonds disguised herself as a man named Frank Thompson to enlist in the Union Army during the Civil War. After working as a nurse at the Battle of Bull Run and other bloody skirmishes, she risked her life in multiple spy missions to infiltrate the Confederate lines. In one amazing assignment, she darkened her skin with silver nitrate to impersonate a freed slave. Vibrant illustrations complement the incredible narrative, filled with meticulous period details.

Perfect for: Kids who like stories of bravery and cunning.

Moonwalk: The First Trip to the Moon

This action-packed narrative, accompanied by full-color photos, blasts readers through Apollo 11’s historic flight in 1969 — from the Saturn V lift-off and the first lunar landing to Neil Armstrong’s historic moon walk and the Pacific splashdown and quarantine. Riveting data on rockets, astronaut training, and the U.S. space race with Russia fill out the story.

Find Moonwalk: The First Trip to the Moon at your local library.

Two-time Nobel Prize winner Marie Curie was the first woman to win the award and the only woman so far to win it in two different fields. (Curie won for her work in physics in 1903 and for her work in chemistry in 1911.) A pioneer in researching radioactivity, Curie overcame huge poverty, gender, and health barriers to achieve her goals. This inspirational biography highlights her childhood in Poland and her early adult years and emphasizes the extent to which Curie educated herself.

I Am Rosa Parks

Rosa Parks, a black seamstress, refused to give up her Montgomery, Alabama, bus seat to a white man on Dec. 1, 1955. Her stubborn courage led to her arrest and a boycott that instigated the Civil Rights Movement. This inspiring autobiography describes her childhood, her community leadership, and her discontent that culminated in the famed protest for equality. Uplifting advice urges readers to treat everyone with respect, not hate. Clear, direct writing is accompanied by lovely watercolor paintings.

Perfect for: Courageous children who want to make the world a better place.

Find I Am Rosa Parks at your local library.

Handel, Who Knew What He Liked

Bravo! This witty, irreverent biography of George Frideric Handel deserves a standing ovation. Handel, a composer in the Baroque era, wrote the Messiah, one of the best-known works in Western music. The book’s dramatic illustrations, done with operatic flair and sly visual gags, harmonize with intriguing information about Handel as a mischievous child and a dueling adult.

Find Handel, Who Knew What He Liked at your local library.

Ben and the Emancipation Proclamation

Literacy is forbidden for slaves in the South, but young Ben secretly teaches himself to read. Civil War chaos forces him into a Charleston slave prison, where he exhilarates fellow inmates by reciting a newspaper bulletin of Lincoln’s Emancipation Proclamation. Inspirational homage to perseverance, African-American struggle, and language arts.

Find Ben and the Emancipation Proclamation at your local library.

Six biographies of famous American female athletes are teamed together in this inspiring book, which describes how each of these women worked hard to overcome obstacles to reach the top of their sport. The featured jockettes include Mia Hamm, Michelle Kwan, Rebecca Lobo, Shannon Miller, Marion Jones, and Venus and Serena Williams. Includes color photos.

How can a penniless 18-year-old girl travel the world seeking adventures in 1778? Deborah assumes a man’s identity — “Robert Shurtliff” — and enlists as a soldier in the Revolutionary War. Fighting bravely against the redcoats, her gender secret isn’t discovered until she is wounded. Exciting reading for risk-taking kids.

Sequoyah was a crippled Cherokee metalworker with a sky-high ambition: he wanted to invent an alphabet for his tribe’s language. After years of failure and ridicule, he created 84 symbols that allowed his people to read and write in their native language. His perseverance and achievement is warmly illustrated with majestic woodcuts.

Find Sequoyah at your local library.

A boy and his father go to the Vietnam Veteran’s Memorial seeking his grandfather’s name, stenciled on a wall with 58,000 other U.S. military casualties. Beside his name, they leave a photo of the grandson he never met. The book is a poignant way to introduce children to this complex and divisive era.

Find The Wall at your local library.