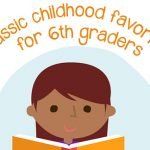 Remember how much you loved the adventures of Bilbo Baggins, Ponyboy Curtis, Hazel, and others? Now it's your 12-year-old's turn! Classic books to share with your child.

The Chronicles of Narnia

The hook: Sure, they may have seen the movie already, but even so, this seven-book series — which deftly combines the supernatural and reality — is a classic that has influenced children’s literature for a half century. The protagonists, children from the real world, are magically transported to Narnia, where under the wise guidance of the lion Aslan, they play essential roles in shaping events in this alternate world’s fate (a powerful fantasy for any child). In each of Lewis’s page-turning books, all crafted in masterful prose, Narnia’s very fate hangs in the balance: Will good win out over evil?

Perfect for: Readers, 8 and up, drawn to illusive symbols and magic.

Find our favorites at your local library: The Lion, the Witch, and the Wardrobe, The Magician’s Nephew, Prince Caspian.

Bilbo Baggins wasn’t looking for adventure — it arrived on his doorstep in the form of 13 dwarves and the wizard Gandalf, who ask him to join their quest to reclaim a stolen treasure. The reluctant hobbit goes on a thrilling journey to confront the dragon Smaug, and in the process encounters hungry trolls, killer spiders, and an ancient magical ring. Readers may recognize some of the characters from The Lord of the Rings trilogy in this prequel, which is a more approachable read for tweens.

Want to see the movie? Try the live-action trilogy inspired by the book, beginning with The Hobbit: The Unexpected Journey from 2012.

Find The Hobbit at your local library.

White Fang, half wolf and half dog, is mistreated by a string of cruel owners. Aggressive and angry, the wolf-dog learns to hate humans and animals alike, until he’s rescued by mining expert Weedon Scott. Through gentle treatment and patience, Scott eventually tames the wild wolf-dog, and the two form an unbreakable bond. Written partially from White Fang’s point of view, this story examines how environment shapes the behavior of men and other animals and offers objective observations about the harsh beauty of the natural world.

Want to see the movie? Check out the 1991 adaptation starring Ethan Hawke, which loosely follows the plot of the book.

Anne Frank: The Diary of a Young Girl

The Nazis occupied Amsterdam in 1942, forcing 13-year-old Anne Frank and her family to hide in the secret annex of a warehouse. Anne memorializes her two years of claustrophobic confinement in this witty, fearful, intimate diary, that concludes when the Gestapo discover the hideout. (Anne died in March 1945, in Bergen-Belsen concentration camp.) This is a remarkable coming-of-age classic, set in tragic circumstances. Anne wrote, “I want to go on living even after my death!… Will I ever be able to write anything great?” Her wish has been realized.

Find Anne Frank: The Diary of a Young Girl at your local library.

The Wonderful Wizard of Oz

A cyclone sweeps Dorothy away from her ordinary life in Kansas, along with her house and her dog Toto. When she crash-lands in Oz, Dorothy discovers that her house has unintentionally taken out the Wicked Witch of the East, freeing the Munchkins from her reign. With a magical pair of silver shoes given to her by the Good Witch of the North, and her new friends the Scarecrow, the Tin Woodsman, and the Cowardly Lion, Dorothy seeks the Wizard of Oz to help her return home to her Uncle Henry and Aunt Em. Kids who know the story from watching the film version may be surprised at how the original book’s plot differs from that of the movie.

Want to see the movie? Check out the 1939 classic starring Judy Garland.

Perfect for: Kids who appreciate the fantastic.

Find The Wonderful Wizard of Oz at your local library.

Ponyboy, a proud Greaser from the wrong side of the tracks, is always up for a rumble against the rich Socs (short for “Socials”). But when his best friend, Johnny, accidentally kills one of the Socs gang, 14-year old Ponyboy must confront the violent reality of his life and make choices that will determine his future. The Outsiders was written by a high school student in 1967, and the story’s themes about class, violence, and teen coming-of-age still resonate with tweens and teens today.

Want to see the movie? Check out the 1983 adaptation directed by Francis Ford Coppola, though parents should note that the movie features violence and underage drinking.

Find The Outsiders at your local library.

When the rabbit Fiver has a terrible premonition about his warren, he and his brother Hazel gather a group of young rabbits to seek a new home in the English countryside. They evade predators and farmers’ snares and eventually make it to the safety of Watership Down. But before they can settle in, they discover that their search is not over. Well-developed characters and engaging details make this a great introduction to allegory for young readers. And a helpful glossary will help readers who struggle with the “rabbitese.”

Want to see the movie? Check out the 1978 animated adaptation, which will appeal to older kids and adults alike.

Find Watership Down at your local library.

After a pirate dies at his family’s inn, young Jim Hawkins finds a map to a secret buried treasure. Jim shows the map to the local squire, and the two, along with the town doctor, decide to outfit a ship and go in search of the treasure. But when the trio hire on the scheming pirate Long John Silver to be the ship’s cook, their treasure hunt takes a murderous turn. Compelling characters and lots of suspense help kids tackle this classic book, which is a great vocabulary builder.

Want to see the movie? There are lots of adaptations. Readers looking for a classic take might enjoy the 1950 Disney version, but those looking for something silly might like Muppet Treasure Island (1995) or the animated Treasure Planet (2002), which sets the story in space.

The nanny at the Banks house in London has magical skills. Her name is Marry Poppins, and she can fly through the air with her umbrella, serve tea on the ceiling, and whisk the children away on a Christmas shopping trip on a distant star. She also has eccentric friends, like Bert the match man, the Bird Woman, her laughing uncle Mr. Wigg, and multiple creatures she chats with. A word to the wise, though: the title character has a no-nonsense personality, full of vanity, bossiness, and sarcasm. So, while she doesn’t resemble the film’s portrayal by a lovable Julie Andrews, it’s a great book to read and discuss together how it compares to the movie.

Perfect for: Anyone who loves magical adventures.

The True Confessions of Charlotte Doyle

Upper-class 13-year-old Charlotte Doyle is the only female aboard the Seahawk, a schooner voyaging from England to Providence, Rhode Island in 1832. Tossed immediately into violent conflict between the cruel Captain Jaggery and the mutinous crew, she discards her refined dresses and ladylike behavior, dresses as a cabin boy, climbs the tallest mast, and leads her shipmates in successful rebellion. The plot includes a hurricane, a stowaway, a flogging, a knife fight, an odorous brig, loathsome food, and walking the plank. It’s a riveting tale of suspense on the perilous seas with an inspiring girl-power protagonist.

Find The True Confessions of Charlotte Doyle at your local library.

Of Mice and Men

Best friends George and Lennie are migrant workers seeking employment on California ranches during the 1930s. Lennie is large and powerful in size, yet he is mentally disabled and has a tender side. Lennie longs to stroke soft textures, like rabbit fur and girls’ hair, which can land him in trouble. George does his best to keep Lennie from getting into serious trouble. Their dream is to buy their own one-acre farm and “live offa the ffat the lan’” — but this plan collapses when the new boss’s son’s wife flirts with Lennie. The book’s primary themes are economic powerlessness, friendship, and loneliness.

Perfect for: Children who appreciate hard-knock stories of friendship.

Find Of Mice and Men at your local library.

This novella contains four distinct tales about Jody Tiflin, a 10-year-old boy on a California ranch. The title refers to a red colt that Jody receives from his father. Although Jody carefully trains Gabilan and anticipates the joyful day he will ride him, the colt gets sick and dies. It’s a heart wrenching story of an adolescent dealing with loss.

Perfect for: Children who can appreciate stories of love and loss.

Find The Red Pony at your local library.